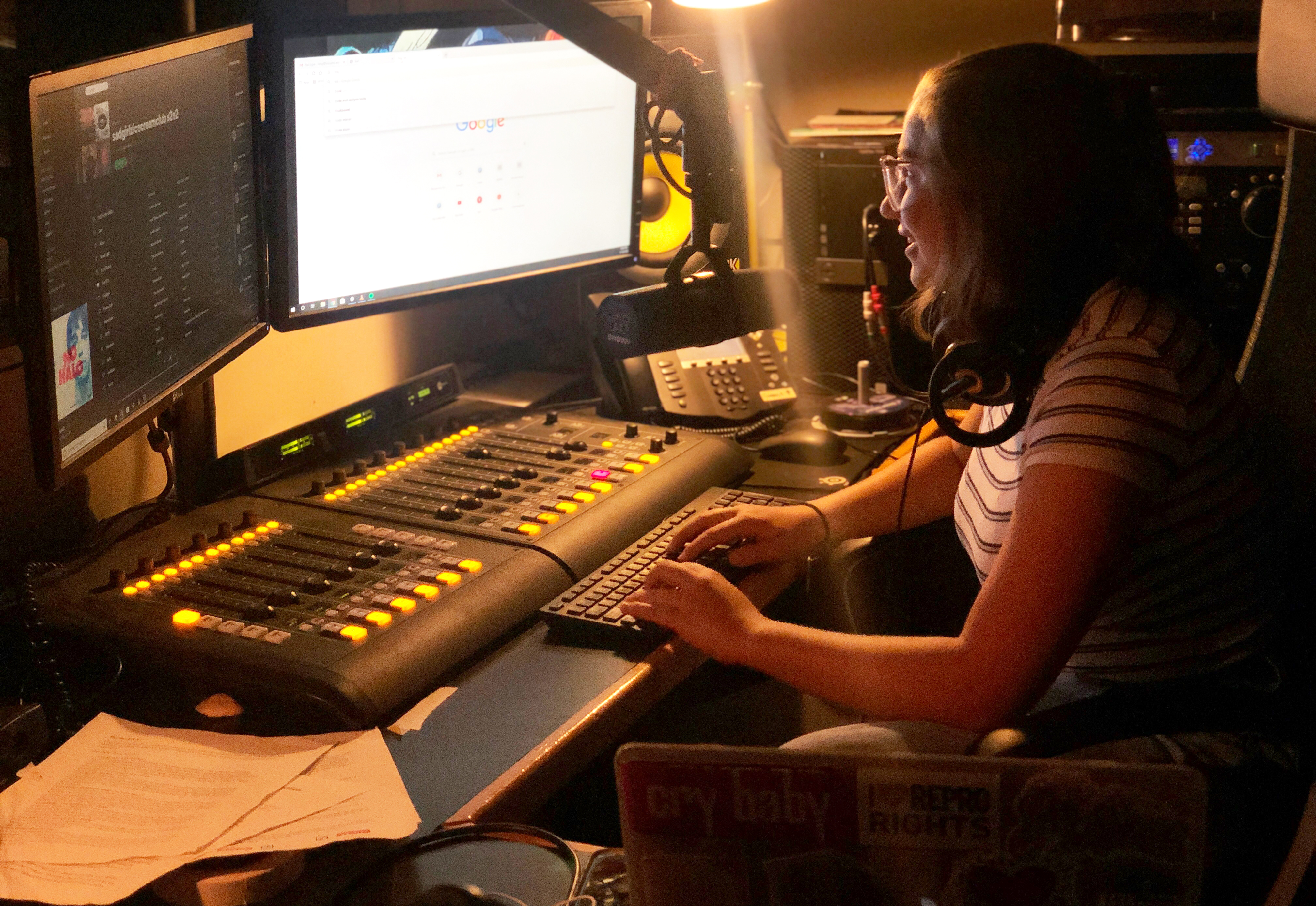 Alex Goler ’21 and Julia Lieto ’21 host their show ‘sadgirlzicecreamclub’ every Wednesday night from 9 p.m. to 10 p.m. (Photo by Mario Sanchez ’21)

For 73 years, the college’s student run radio station, WJRH, has been streaming live on the 104.9 FM radio station and as of 2011, on their website. Although students and Lehigh Valley residents are able to tune in at any time, for some of the DJs being part of WJRH becomes less about the amount of listeners and more about having a creative outlet.

“I do my show for me, not really [for] other people,” Matt Gerber ‘20 said, who is General Manager of WJRH and co-host of his show “The B-Side.”

“For me, it’s not really like a big deal if no one listens,” he added. “It’s more like…a creative outlet for me to…get new songs out there and make these playlists.”

Every DJ has an hour long slot in the radio station, where they play music of different genres from artists of their own choosing.

Francie Keeler ‘21, who has a show called “this is the vibe rn,” does not only do it to connect with strangers, friends and family through music, but also as a space for her to put energy into something she loves.

Even though her passion for music dates back to a young age when her father got her involved with music and playing the guitar, Keeler said she never thought of being a musician as a possible career. Instead, it is a hobby and something she does for fun.

“[Music] is like a natural thing for me,” she said. “From a young age, I’ve just been taught to appreciate the artistry that goes into making music…I don’t know what I would do without it to be honest.”

For some students like Calvin Sharp ‘21, the idea of having the opportunity to work with the radio station was part of their reasoning for choosing Lafayette in the first place. As a prospective student visiting campus, Sharp said WJRH was the first thing he gravitated towards because of his long-time passion for music. Back in his hometown, he is part of a band and hopes to keep writing and recording his own music, however, he does not plan on broadcasting his own work any time soon.

Before his recent position as Treasurer, Sharp already had a show that he co-hosted with his friend Paul Johnson ‘21 since freshman year called “Guess What It’s Time for The Show Again,” and plans on continuing to do so.

“Music is kind of like the biggest thing of my life,” Sharp said.

Ethan Semendinger ‘21, who runs a show called “Mid-Day Bach” with a focus on classical artists, said that although there might be a group of people who listen to his show, he also mostly uses his slot as a creative outlet.

“I enjoy classical music, it’s very relaxing,” he said. “It breaks up the monotony of just being in class and studying and then going back [to] writing flashcards and doing worksheets.”

“Mid-Day Bach” gives Semendinger the chance to look into the history of classical songs and artists with the likes of Johann Sebastian Bach and Carl Philipp Emanuel.

The station was originally called “Radio Lafayette” in 1946 when it was established on the third floor of Hogg Hall, according to the WJRH website. In May of 1947, it was renamed WJRH in honor of James Renwick Hogg, who donated Hogg Hall. The first broadcast show “Songs of Seven” wasn’t officially aired until Oct. 1, 1947 when they broadcasted various popular songs from seven to 11 p.m.

In the following years the station broadcasted collegiate sports, which led to a regularly scheduled sports broadcast starting in the Fall of 1948. Afterwards, they populated their schedule with quiz shows and talk radio. Subsequently, WJRH has diversified its programming by adding a “full recording studio, support to broadcasting, and a community of people who love everything about sound.”

WJRH board members and DJs often times station a booth on the quad during events, or sometimes just on sunny days. In recent years, they have brought multiple artists on campus such as George Clanton and Negative Gemini.

As of today, the board consists of eleven members with various titles in order to assure that the station runs smoothly. Every year, the board runs elections in which students hold their respective titles for an entire year. Since all the board members are seniors, Sharp said that the station is looking for more people to join WJRH.

Additionally, Sharp and a group of people are currently working on expanding the music scene at the college by creating a club called Lafayette Interdisciplinary Musical Society (LIMS). The new club would serve as a branch for WJRH where students would be provided with a support system and the opportunity to further immerse themselves in music on campus.

“The idea is to use that to essentially create our own…little community,” he said. “Just something else that people can do…[when they] come to Lafayette and just want to be around music.”

This is reminiscent of Peter Torrente ’20’s experience as Vice General Manager for WJRH and DJ for his show “What’s A Genre,” where he plays a variety of songs.

Throughout his time at the station, Torrente said he had become friends with a lot of the current and past board members due to their shared interests and experience. On Fridays, the team gets wings together, and they hang out outside of the board meetings.

During the Block Party this past Saturday, the team had to get up at 10:30 a.m. and set up, but Gerber said that although no one wanted to be up early, it “never feels like work.”

On the WJRH website, the show schedule and open slots are currently listened. The listed shows vary from podcasts, Indie, Alternative and Rock.

Correction 09/26/2019: This article originally referred to artist George Clanton as George Clinton. It has been updated to reflect the changes.