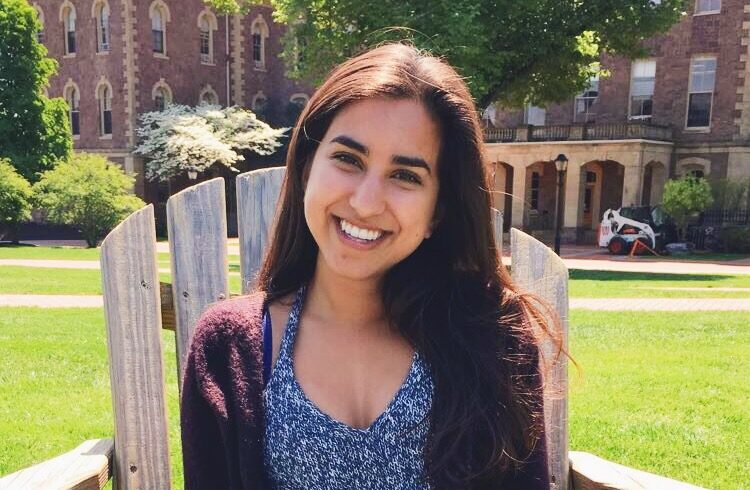 Ghai stepped into her role as student government president following the organization’s first meeting of the year. (Photo courtesy of Alisha Ghai ’20)

Alisha Ghai ’20 will be serving the campus community for the 2019-2020 academic year in response to a recent leadership shift in the Lafayette College Student Government.

Ghai is filling in the shoes of Fray Familia ’20, who announced that she was stepping down from the presidency at the first student government meeting on September 5th. Prior to her election, Familia was the director of the Equity and Inclusion committee, and much of her campaign was focused on peer advocacy and inclusion on campus.

During her time as director of the equity and inclusion committee, Familia organized a push to increase the minimum wage on campus for students and was involved in a number of other projects related to inclusion. She won the spring election last year with 62% of the vote.

Familia was unavailable for comment at the time of writing, but Executive Secretary of student government Jordan Avery ‘21 said that Familia’s reasons for resignation were primarily personal.

Ghai said she would miss Familia’s “sense of humor, and her unique leadership style,” but that she understood her decision to step down.

“I fully respect her decision to…prioritize herself,” Ghai wrote in an email. “[It’s] a reminder to all of us that we should all be putting our own well-being and academics first, before any extracurricular/leadership activities.”

As president, Ghai will be responsible for running the weekly student government meetings. She will also serve as the Student Associate on the Board of Trustees and meet every other week with President Alison Byerly to “discuss issues of development, student life, and more.”

“So far, these meetings have been the most exciting part of this new role,” Ghai wrote in an email. “I’ve already been able to receive updates from President Byerly on some StuGov projects from last year, and she’s been extremely helpful in helping us brainstorm how to best support student [organizations] and other aspects of student life financially in the coming year.”

Victoria Puglia ’21 will be taking Ghai’s role as Vice President, stepping out of her old position as director of student organizations. She said that she has been assisting Riley Alvaro ‘20 in filling her old position.

“I’m…just making sure the branding initiative runs smoothly as a continuation of what was started last year,” Puglia said. “[We’re also] in the process of accepting new clubs…so I’m still going to be helping out a little bit with that.”

In addition to helping transition out of her former role, Puglia said she will be running the elections when the next election cycle comes around and assisting Ghai in her transition to the presidency.

“I’m [working] a little bit everywhere at the moment, just kind of helping out where I can help out and just taking a little bit of pressure off [Ghai],” she said.

Over the last several years, student government has undergone significant changes to its structure. In fall 2017, the organization formed an ad hoc committee to reform its internal structure, which led to numerous changes including increasing the number of members from 15 to 45 and transitioning from using calendar year terms to academic year terms for elected positions. Of the 45 positions now available, only 12 are elected, including the eight committee heads.

In addition to these recent structural changes, student government will also be transitioning to a new advisory staff following the departure of Kristin Cothran, former Director of Student Involvement, last semester. According to Ghai, Cothran will be replaced by Pamela Brewer, who held the advisor position for 30 years before Cothran. Brewer will be assisted by Student Life Fellow Riley Godshall ‘19.

Puglia said she is excited about the direction that student government is taking under the new structure.

“Last year was…a transition period,” she said. “I think now…everything is starting to really fall into place. [The committee’s] specific roles are really beginning to solidify, and everyone is very energized.”

As the members of student government begin to settle into their new roles, Ghai said she hopes the student body will feel confident coming to student government and utilizing their relationships in the administration to bring forward issues that students find important.

“I want to emphasize how excited I am for the StuGov body this year,” Ghai wrote. “I’m really grateful that the whole StuGov body has been so supportive of me as I’ve taken on this new role in the past few weeks.”