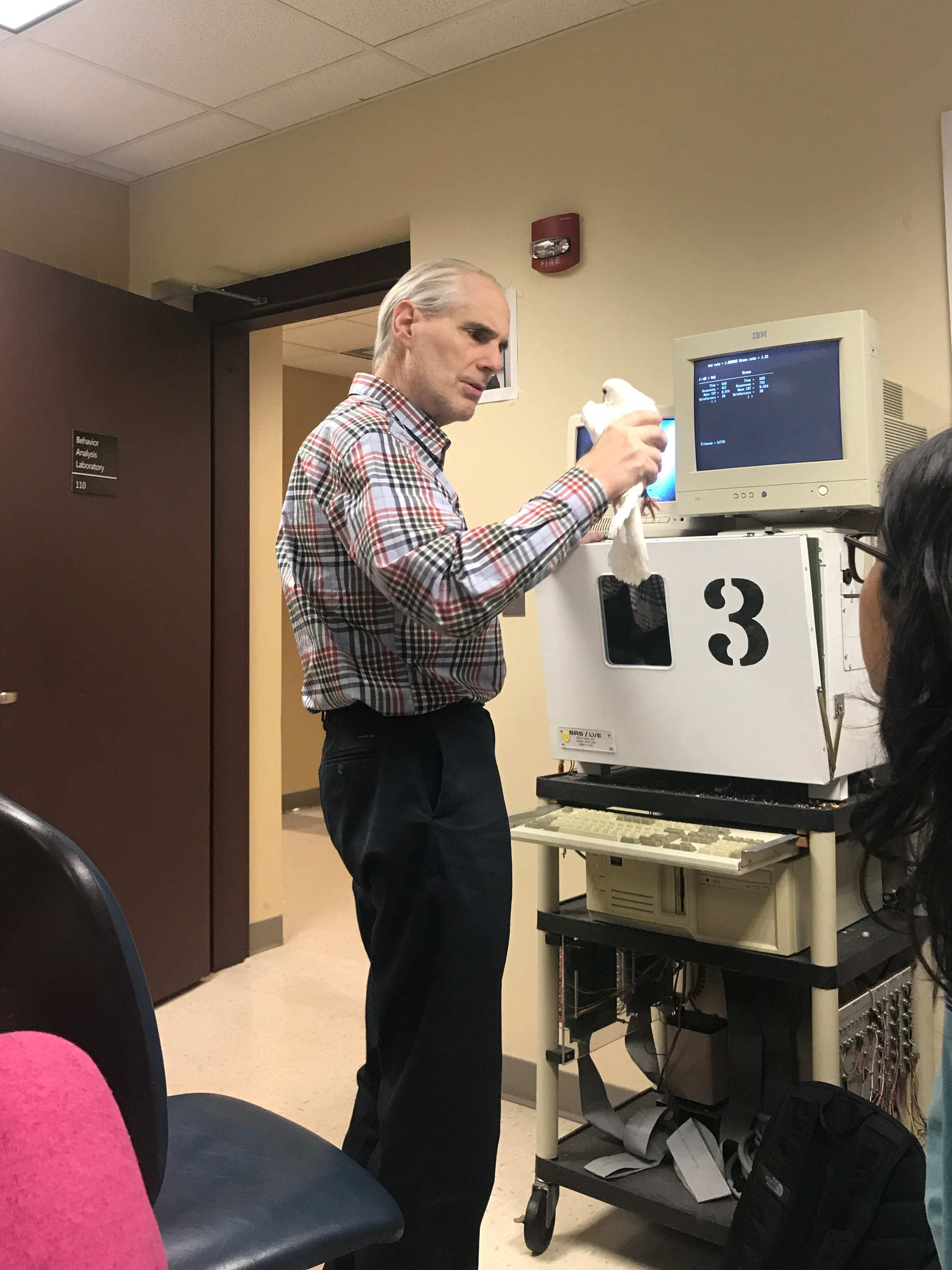 Taking care of animals can be a demanding task, something Dr. Robert Allan knows far too well. Several days of the week, Allan wakes up early in the morning to drive to the college from New York City in order to take care of the pigeons he believes are the key to understanding human behavior.

In his Psychology 321 course “Learning,” students get to learn about the psychology of behavior through working with pigeons.

Allan, who works in the psychology department, has been at Lafayette since 1992, and he has been working with pigeons since 1998. Even his 210 page dissertation was full of data collected from monitoring the behavior of pigeons.

“I love working with pigeons. They’re very trainable, very smart animals. They have beautiful eye sight. They have over ten million cones in each eye, humans only have eight million,” Allan said.

In his pigeon lab, Allan puts pigeons in a chamber where they can tap on response keys. A tray of food then comes up in the chambers for the pigeons to eat. Through this experiment, Allan and his students change different factors for the pigeons such as the rate that the food is delivered and the color of the keys, observing how behavior is flexible based on certain changes.

“It’s a demonstration of exactly what behaviorism suggests, which is that our behavior is a product of our behavior interacting with the environment,” Allan said.

Annekka Chao ’20 and Caroline Mannix ’20, students in Allan’s class, enjoy being able to put their learning into practice.

“We are actually able to visualize what we learned in the classroom and apply it to the lab setting which I think is a really cool opportunity,” Chao said.

“It’s a very useful class to be in, because you can see now this conditioning, and reflexes, and reinforcement, in real life. So I find it’s actually more applicable to the outside world, than just pigeons in a cage,” Mannix said.

While the pigeons provide an opportunity to understand how behavior works, they also are a source of joy for Allan, who greets his pigeons in French because they are a French species — the White Carneau.

“I’ve had pigeons escape sometimes and fly around, and some of them will fly right into the chamber. They’re ready to eat, and ready to respond, get the food — they’re amazing,” Allan said.

Allan is passionate about working with his pigeons, which his students seem to appreciate.

“Dr. Allan is dedicated to having his students actually learn the material rather than just teaching the material. Because of this, he goes above and beyond during class to respond to questions or talk anything through because he is genuinely there to help,” Chao said.

“To watch the pigeons, you put a pigeon in a chamber who’s never been in a chamber before, and by the end of the day you have him pecking a key. To see learning happen like that, and to know the conditions which brought about the pecking behavior, and to watch the behavior change throughout the semester, it’s the most beautiful thing you’ve ever seen, just amazing,” Allan said.

Allan, however, did not always plan to work in the field of psychology.

“I was a physics major as an undergrad,” Allan said. “One night, my brother and I were arguing about the role of science in government. We’d been arguing for quite some time, maybe an hour or two. My brother looked at me and said, ‘Bob, if you really believe what you’re saying, you should read a book by B. F. Skinner called ‘Walden Two,'” Allan said.

Skinner was the founder of the field of psychology that Allan studies. He was the first to build the pigeon chamber that now is such a large part of Allan’s career.