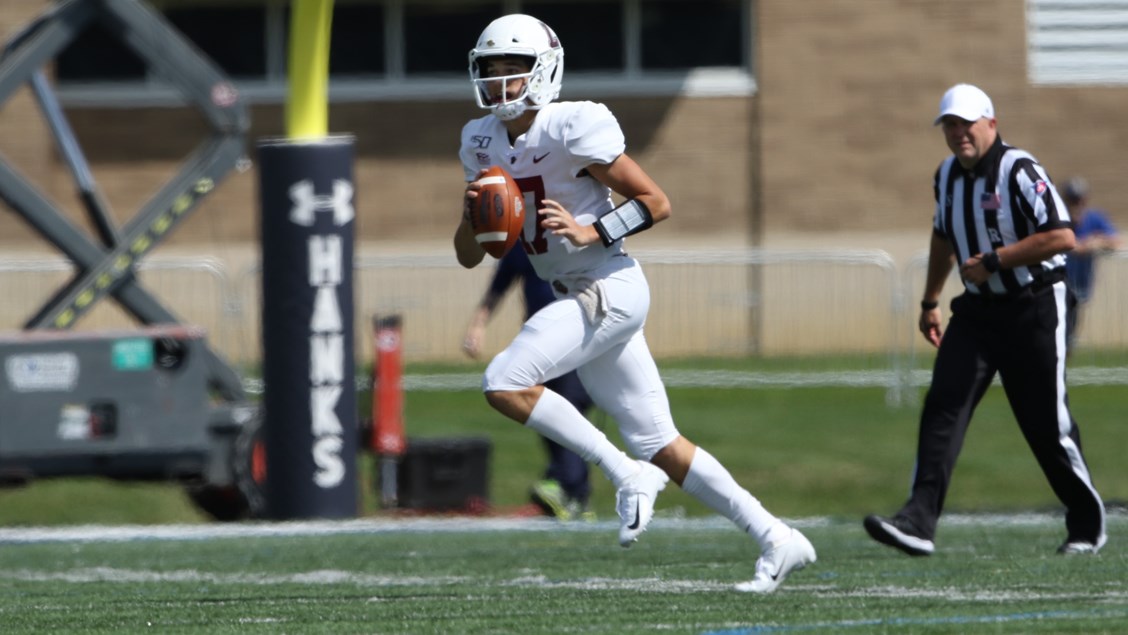 Freshman quarterback Keegan Shoemaker was named the Patriot League Rookie of the Year in 2019. (Photo courtesy of athletic communications)

The Leopards football team is off to an 0-2 start for the third consecutive year. The team lost to Monmouth University 24-21 last Saturday in a game where the Leopards found themselves down 21-7 at the half, before narrowing the deficit in the second half. The team struggled to move the ball down the field in the first half, and only completed 11 first downs compared to Monmouth’s 22.

The run game was also nonexistent for the Leopards as they totaled -12 yards in the contest. Freshman quarterback Keegan Shoemaker got his first collegiate start in the contest and threw two touchdowns to go along with 256 yards.

“It means a lot that my teammates and coaches are able to trust me with that [starting] role as a freshman,” Shoemaker said. “My teammates have really helped me step into that role along the way.”

The Leopards came to life in the last five minutes with a punt block by senior tight end/fullback Ryan Monteyne. The play put the Leopards within striking distance at the nine-yard line and the Leopards were able to capitalize a few plays later. Shoemaker connected with senior wide receiver Julian Spigner for a 13-yard touchdown and moved the Leopards to within three points with 4:38 remaining. Monmouth ended the game by running out the final four minutes, stunting the Leopards’ comeback bid.

Head coach John Garrett emphasized the experience the team is getting week-to-week and the importance of the team learning from each game.

Another developing situation for the Leopards is who will start at quarterback every week. Although Shoemaker got the last start, junior Sean O’Malley has been the go-to guy for Garrett in the past two seasons. Shoemaker’s three touchdowns in two games are one shy of O’Malley’s total from last season. Junior Cole Northrup was the starting signal-caller in the team’s first game this season, sharing snaps with Shoemaker.

“We are really pleased with Keegan and how he’s played,” Garrett said. “He has made some explosive plays…and executed the gameplay confidently and in the right way. He gives us the best chance to win.”

The Leopards’ next game is their home opener against Sacred Heart University tomorrow at 12:30 p.m.