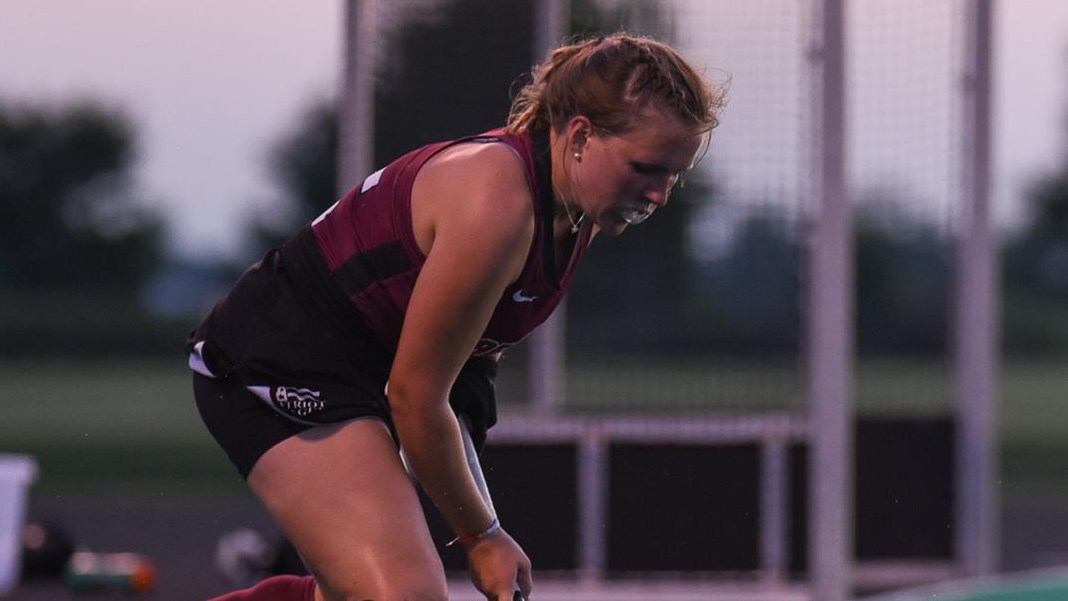 Freshman forward Felicitas Hannes lifted the team to a victory in their home opener with a goal and an assist. (Photo courtesy of Athletic Communications)

In her first week of collegiate field hockey, freshman forward Felicitas Hannes earned the Patriot League Rookie of the Week honors. The award comes after a two-point performance in the season opener against Virginia Commonwealth University (VCU), including an assist and the game-winning goal in a 2-1 victory.

“I was overwhelmed,” Hannes said. “It couldn’t have been better, scoring and having an assist and winning the game with the team. I don’t know how to describe it, it was just awesome.”

With a pair of goals and an assist on the season, Hannes is the points leader for the Leopards, as well as their only non-starter to record points so far. This season marks the first time that Hannes has experienced playing for a school.

“In Germany you don’t have school and hockey connected,” Hannes said. “The hockey part is taken more seriously in America. It’s a big part of your life. You come here as a student and a hockey player. You can do both at a high level.”

The Leopards have played close contests in three of their four games, losing twice by one goal last week. Although they haven’t come away with wins in their most recent matches, they remain 1-0 at Rappolt field in Easton, where Hannes played a key role in showing the home crowd a victory.

“The atmosphere on the pitch here at Lafayette is great,” she said. “If you do something good, people will be very positive about it and give you feedback. If you make a mistake, they are still very supportive. The bench support is great. If we have a good goal scoring opportunity, they are so hyped and if the team scores, they go crazy.”

Hannes was two years old when her older sister started playing at age five. At three years old, Hannes picked up a stick herself.

“I can’t remember a time when I didn’t have hockey,” she said. “I think when I was five or six, I was sitting in a hockey pitch and I said to my friend ‘We have to keep training to get better and better.’ I think that’s the moment I knew I wanted to get really good at hockey.”

As she continued to play, Hannes earned spots on special selection teams and got the chance to try out for the national under-16 team. Although she wasn’t added to the team, she continued to compete, reaching 10 club championships with different teams corresponding with her age group. Most recently, her under-18 indoor team, Rot-Weiss Köln, won their championship against teams all across Germany.

After playing field hockey throughout high school, Hannes hoped to attend an American college for both the high level hockey competition and academics, as she plans to major in economics. Lafayette’s small size drew her in, as well as her rapport with head coach Jennifer Stone ‘04.

“I really wanted to come here,” Hannes said. “Jennifer [Stone] made contact with me, and it went on for six months. [Junior midfielder] Anna [Steps], the other German on the team, FaceTimed with me. I visited in February, and I enjoyed this place so much, the people are very nice.”

Along with her other criteria for college, Hannes said she wanted it to feel like a second home. The field hockey team is certainly doing their part.

“Before the first game, the sophomores gave the freshmen a stuffed animal baby leopard, which was very sweet,” Hannes said. “Every teammate got an individual bracelet from the seniors with a message on it. We got a card that said something about our personal play.”

Hannes’ letter from the team’s seniors reads “Your love for the game infects and encourages your teammates. Never stop playing with HEART!”

Hannes is part of a freshman class joining a team that made the Patriot League Tournament last season, and could be poised to improve upon that performance this year. The team has faced two top-25 nationally ranked teams so far during their non-conference schedule, and will play twice more before Patriot League competition begins next weekend.

“I think the season is going to be very successful,” she said. “I think this team could make the Patriot League final, and my goal is to win the final. I think the team has great chances to win.”

The Leopards will look to stay unbeaten at home tonight at 7 p.m. when they host the Providence College Friars.