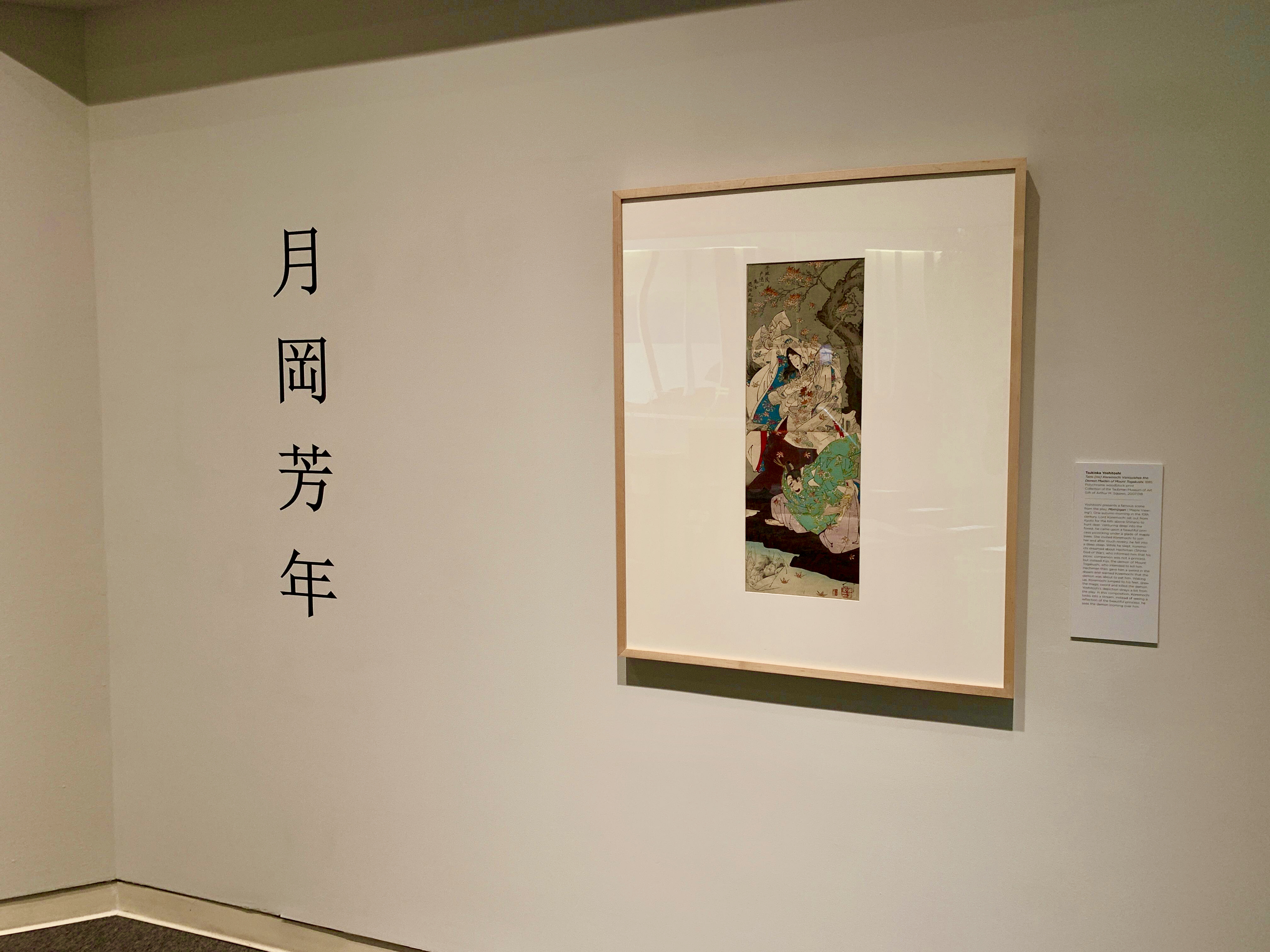 Each of Tsukioka Yoshitoshi’s wood carvings carry their own stories based on East Asian folklore that varies from marriage to war. (Photo by Abi Olofin) ’22

While considering visual art, one may first imagine a traditional drawing or a paitning. Tsukioka Yoshitoshi, however, challenged that perception by making his visual art through cutting and designing wood.

Yoshitoshi, a Japanese artist who lived from 1839-1892, based his works off of both regional and self-created stories. Twenty-four pieces of Yoshitoshi’s art are currently on display in the Williams Center for the Arts.

The introductory description of Yoshitoshi in the Williams Center for the Arts states that he got his inspiration from “East Asian folklore” as well as his own personal imagination, and each piece tells theses stories through depictions of selected scenes. Excerpts of these stories can be found alongside the pieces in the gallery.

One of Yoshitoshi’s pieces in the exhibition, “Heron Maiden,” depicts a woman holding a large bird in one hand, and a fan in the other hand, with the fan spread out behind her and the bird. The description beside it tells the story of an old Japanese folk tale, in which a man rescues an injured bird and then eventually marries a woman who weaves silk for him to sell.

The woman tells her husband not to watch her work, but his curiosity gets the best of him, and when he walks in on her weaving the silk, he finds out that she is actually the bird he rescued. She then ends the marriage because he is not allowed to be married to her and knows now that she can take on the form of the bird.

Understanding the folklore such as the one behind “Heron Maiden” adds a new layer to Yoshitoshi’s art because viewers can associate specific aspects of the stories to features of the artwork.

Another piece, “The Adolescent Yoshitsune Fights Benkei on Gojo Bridge,” depicts two people in battle with one another, each holding spears and looking to be mid-fight. The scene was created with three pieces of wood put together.

The blurb beside it states that the piece tells a story similar to that of David and Goliath, where an ordinary man named Yoshitsune defeats the evil warrior Benkei.

An article for “The Art of Japan” explains that the wood carvings made by Yoshitoshi are part of an art form called “Ukiyo-e”. The article then calls Yoshitoshi “one of the form’s greatest inventors.”

The Yoshitoshi exhibit is an experience that depicts not only intricate art, but also provides elaborate stories for each piece. Yoshitoshi’s artwork will be exhibited at the Williams Center for the Arts until Dec. 15.