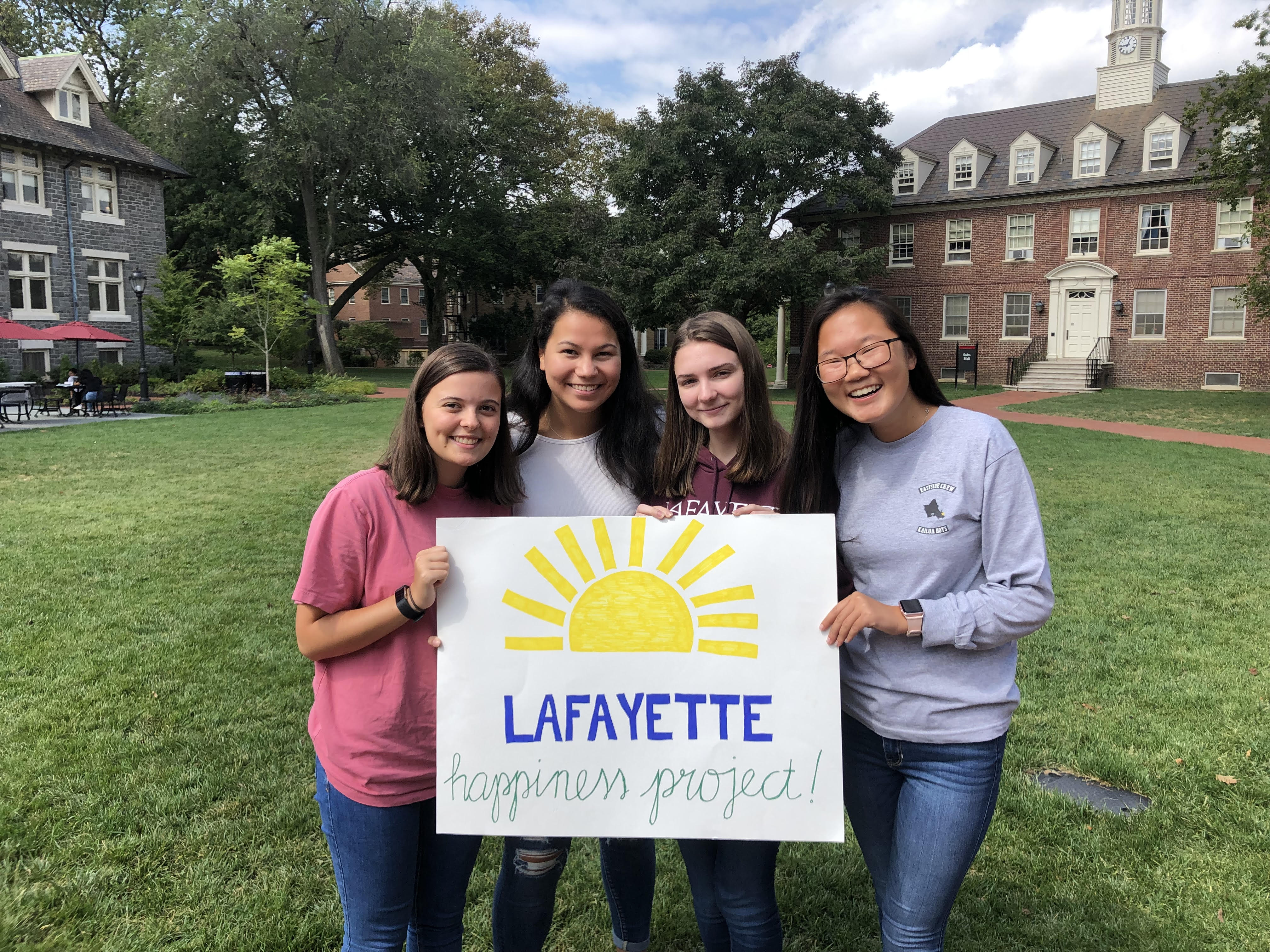 The Lafayette Happiness Project, the new student-led club, hopes to lighten students’ mood through therapy dogs and other events on campus. (Photo courtesy of Taylor Stone ’22)

While walking through the activity fair last week, students may have noticed a new club being promoted by four friendly, smiling students.

The Lafayette Happiness Project is committed to lowering stress and increasing happiness among students. By organizing various events such as bringing therapy dogs to campus over midterms and finals week, the executive board hopes to improve students’ overall well-being, especially during weeks that are particularly busy on campus.

This past spring, the founders of the club said that they wanted to help students cope with stress throughout the semester. After several meetings with student government representatives, the club was officially approved last May.

The club had a successful turnout at the activity fair, with over 100 people signing up.

“I think we were all thinking, ‘what is lacking on this campus?’, as freshmen, ‘what did we miss from home?’” said club President Taylor Stone ‘22.

Stone has a therapy dog back home, so she was familiar with that process.

“I saw [my dog] going to schools and how excited and happy that made kids. So that kind of reminded me of what I miss from home and how we can bring this onto campus and incorporate it in a way that will make other people happy as well,” Stone said.

The group hopes to organize events with service dogs twice a semester, during the weeks of both midterms and finals. The dogs will come from Lehigh Valley Therapy Dogs, which is a group of volunteers who have trained their dogs to be registered as therapy dogs, according to their website.

While bringing therapy dogs to campus is an exciting highlight for the club, the executive board has several ideas for how to bring happiness to campus throughout the whole semester.

According to Sophia Hilger ‘22, program chair and vice president, the club intends to carry out random acts of kindness by putting sticky notes with uplifting quotes on them throughout campus, writing positive messages on whiteboards and organizing de-stress events in Farinon.

“Our overall goal is just to bring happiness and put smiles on peoples’ faces throughout the school year,” said Presley Anderson ‘22, secretary of the club.

The executive board said they hope to collaborate with the Mental Health Coalition and LiveWell on some events since they have similar values.

“I think that it’s pretty easy to be negative about schoolwork and life in general, so I think the main goal [of the club] is to bring a lighter atmosphere on campus and make things happier and generally a better place,” said Abby Esposito ‘22, treasurer of the club.

Anderson noted that another goal of the club is to bring the community together.