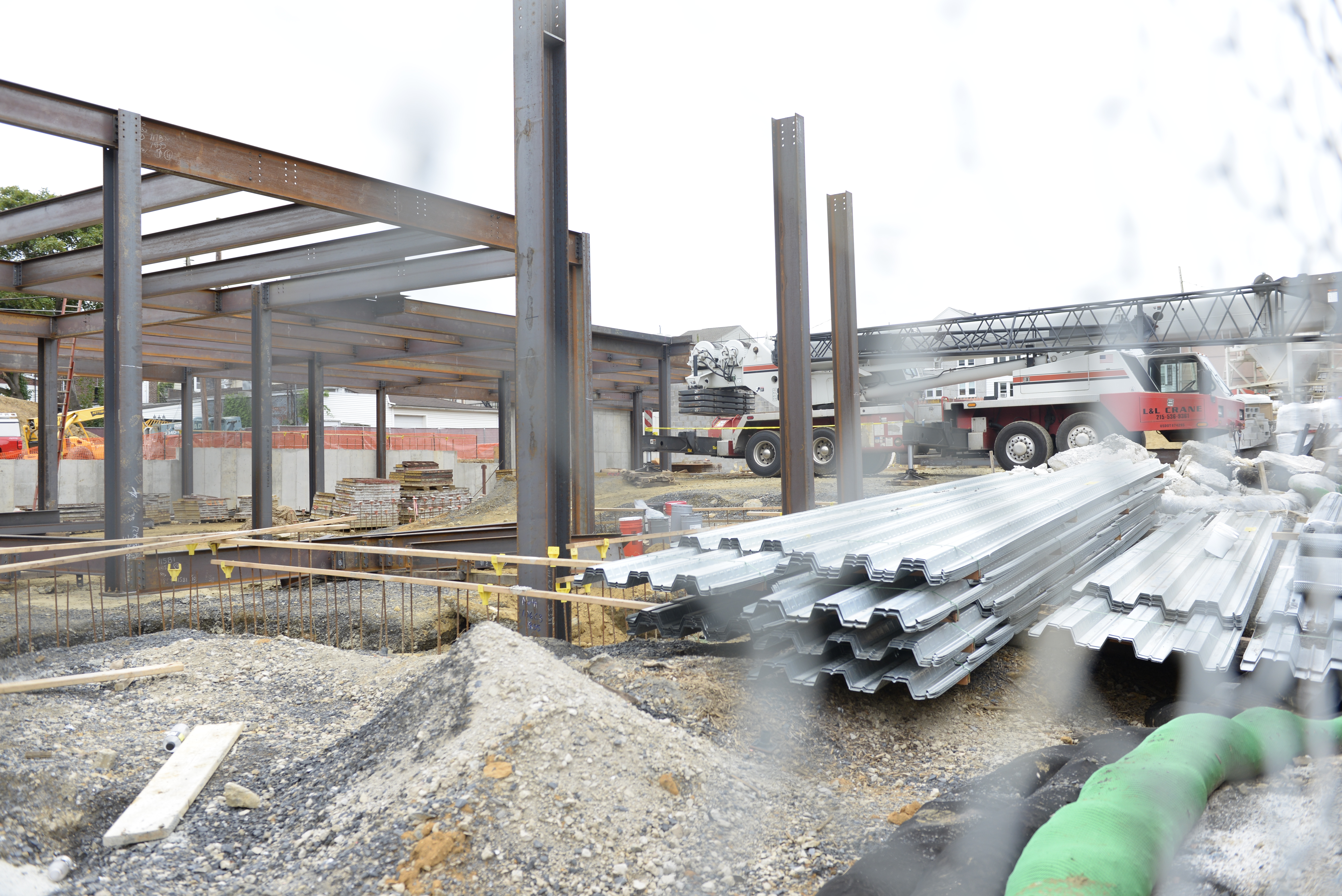 Construction on the McCartney Street dorms began this summer, and is expected to finish by 2020. (Photo by Brandon Marin ’22)

The Board of Trustees voted to fund the McCartney Street dorm project via a student housing development firm last May, meaning students will be leasing dorms from an outside company rather than the college, according to Vice President of Finance Roger Demareski.

In a public-private partnership (P3) deal, the college will continue to own the land, but the building itself will be owned and maintained by the Radnor Property Group. The college will also be utilizing an investment management firm called Harrison Street to help fund the project.

For students, there will be little difference between the new McCartney Street dorms and existing on-campus residence halls, according to Demareski. The only difference, he said, would be that students would sign their lease with Radnor rather than with the college, similar to how campus fraternities currently operate.

“The lease itself is very much parallel to our housing agreement,” he said. “Everything else is the same as a campus residence hall.”

“The main thing I always want students to understand is that they are entering a legally binding agreement with an entity other than the College,” Vice President of Student Life Annette Diorio wrote in an email.

Demareski said that most of the responsibilities of the Office of Residence Life, including room and Resident Advisor (RA) assignments, would continue to be handled by the college.

“The RAs in the building will be selected, trained and evaluated by the Residence Life Office, so effectively, there is no difference between RAs in any residence hall,” Diorio wrote. “Roommate conflicts may be resolved by the RAs and, if the situation escalates, may involve some of the staff who will work for the developer, that piece is not 100 percent clear yet.”

Although the new dorms will be designed by the college, and rooming logistics will be handled by the Office of Residence Life, additional building upkeep will be handled by the housing developer. Demareski said that Radnor will provide the custodial staff for the building, and will also be responsible for any necessary maintenance. The college is also in the process of outsourcing custodial work for non-residential dorms, President Alison Byerly added.

For RAs, Demareski said that living in a building not owned by the college will make little difference. Work orders will still be entered the same way and will be routed internally to the correct location.

Previously, Demareski said that the motivation for funding the project through a P3 deal rather than using the school’s capital budget is to avoid incurring additional debt. By going through a student housing development firm like Radnor, he said, the school will be able to finance other projects that do not produce revenue, such as additional academic buildings and updating ADA compliance on existing buildings.

The McCartney Street dorms will only be available to upperclassmen, and will be tier five, the most expensive housing option offered by the college. Currently, only the 512 March Street apartments, which were also developed through a P3 deal, are tier five and cost $11,284 per student for the 2019-2020 academic year compared to the $10,056 per student rate of tier one housing this year.

The rooms in the new dorm will be suite style, with individual rooms attached to a larger common space. According to Diorio, this type of living situation is better suited to upperclassmen and fit the “types of physical environments that students seem to prefer” based on lottery choices in the past.

“We knew the housing would not be available for first-year students and, in terms of establishing a sense of community, traditional buildings are best for first-year students,” she wrote. “Once we describe the ideal living environments, architects and builders estimate the cost to build and we end up with something that meets most of the needs we outlined.”

Plans for the new housing project include a diner on the ground floor, which will be operated by Bon Appetit, the college’s current dining services provider, but will have a different staff, menu, and chef than existing campus dining halls. Demareski said the diner will be more of a sit-down restaurant with servers to take students’ orders, in addition to a “quick-grab” menu. Meals from the diner will still be on the meal plan, he added.

The building will also be home to the new campus bookstore, which will be moved from the basement of Farinon and replaced by a common study area for students.

“We are anxious to see how the construction comes along and eager to learn from our experience next year,” Diorio wrote.

The expected opening date for the dorms is Fall 2020.