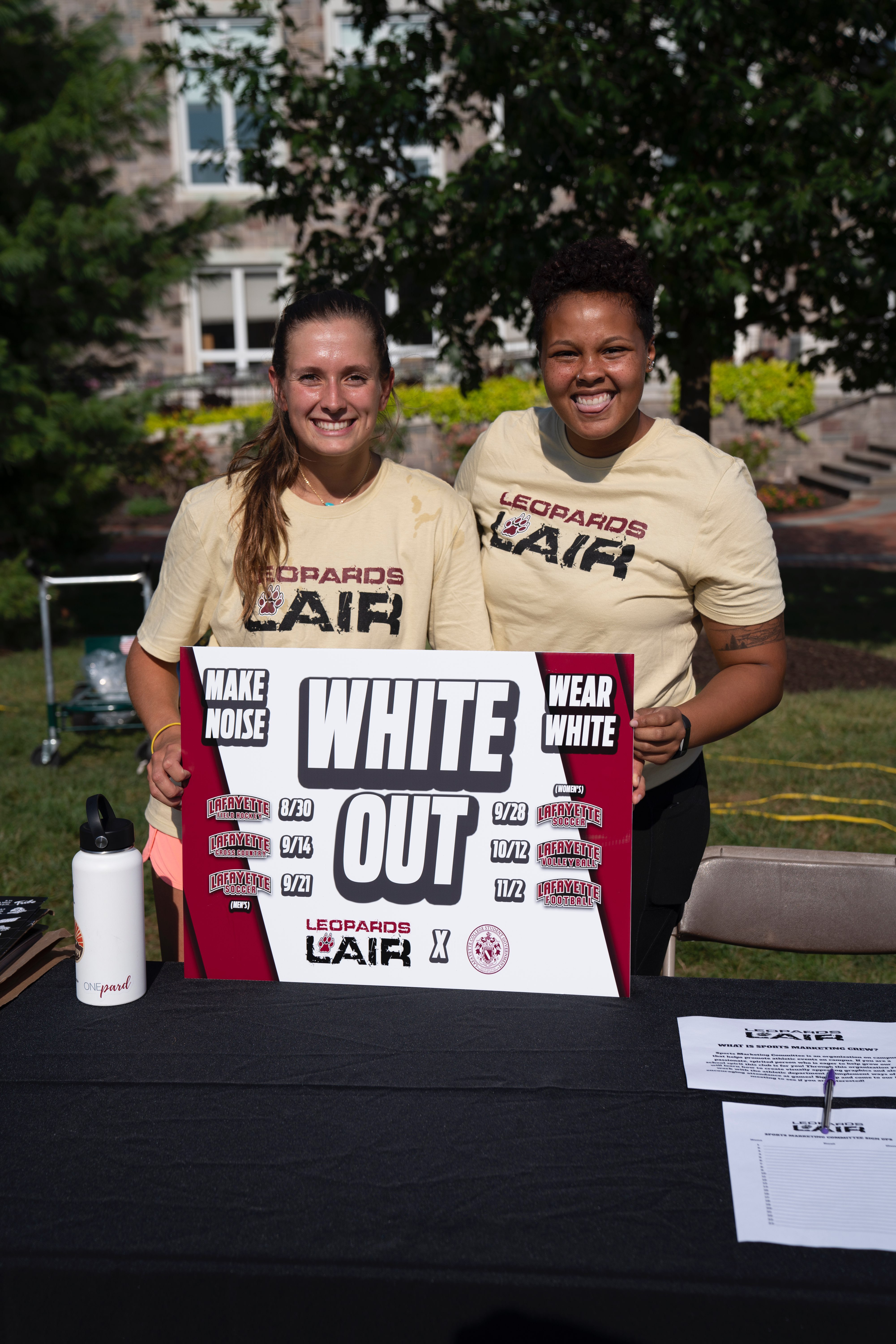 The Leopards Lair, which serves as the student section at Lafayette sporting events, hosted the first ever “white out kickoff event“ on the quad last Friday.

The organization gave out free shirts and non-alcoholic margaritas to encourage students to attend the home openers for the field hockey and men’s soccer teams, who both played and won, on Friday evening. There were also games and giveaways, a mechanical bull, and the free shuttle ride to the Metzgar Fields Complex where the field hockey and soccer teams play.

“Last year was our baseline, and now we’re starting to build,” Sydney Sabino ’20, who helped re-establish the organization, said. “Last Friday was a really good example, we’ve been working so hard for that. It was awesome.”

“With that event being so successful, we had two home games, we had two wins and a lot of times that doesn’t happen without the crowds,” said Brian Ludrof, Director of Creative Media who directly oversees the work of the Leopards Lair. “You hear from everybody how great it is when the fan section is packed. It can absolutely change the outcome of a game.”

The group was created by Stephen Bezer ’15, who initially started the Lair for men’s basketball games, according to Sabino. After only having about 15 people on the “hype crew” last year, the event on Friday drew around 55 signups which Ludrof said was “encouraging.”

“The kickoff event on Friday was the culmination of a lot of work over the last couple months,” Ludrof said. “We thought it was very important to have a successful event really early in the year to get not only freshmen, but athletes and non-athletes integrating with each other.”

Sabino also serves as the Athletic Affairs Director with student government, and is a part of the strategic planning committee for the five-year athletic strategic plan, “Climb the Hill.” Sabino specifically is tasked with strategic goal #4, which is to “build more community and spirit for Lafayette Athletics.”

“[Sabino] has met with [Athletic Director] Sherryta [Freeman] about school spirit, and was tasked with reviving the Leopards Lair,” Ludrof said. “Sydney and Olivia Barney [’21] have been the most active and led the group, Sydney especially. They built this from the ground up.”

Ludrof said that Freeman made it a priority to reinvigorate the Leopards Lair in order to increase school spirit at sporting events.

In addition to maintaining a social media presence, the Lair is now branching out to include a sports marketing crew in addition to the hype crew.

“[The hype crew’s job] is to basically start chants and get everyone hype in the student section,” Sabino said. “And then the marketing crews are the people who make the graphics for the games, post it on Leopards Lair, post it on Twitter, and then they also pick the theme for the games.”

Sabino and Keon Modeste ’21 have also worked closely with Ludrof to improve the Lafayette fan club app, which is available for download. Ludrof said that Modeste has “taken the lead on the app and how [to] best promote and use it.”

“The app is a big thing, we’re very much a work in progress,” Ludrof said. “I feel like we’re in a good place. It’s one of the few things we can do that promotes every sport.”

“As we get things ironed out, we have plans to get more businesses giving items or discounts as prizes for attending events,” he added. “We already have interested businesses.”

Sabino said they hope to eventually add push notifications to the app to remind students when and where sports games are being played throughout the school year.

“Basically just increasing attendance to games is number one,” Sabino said. “We just want to keep a consistent fan base and have people excited to go to the games.”

“If more people come to the games, then hopefully we have a better chance of winning so [the] energy is raised and you can see that because that happened on Friday,” she added.