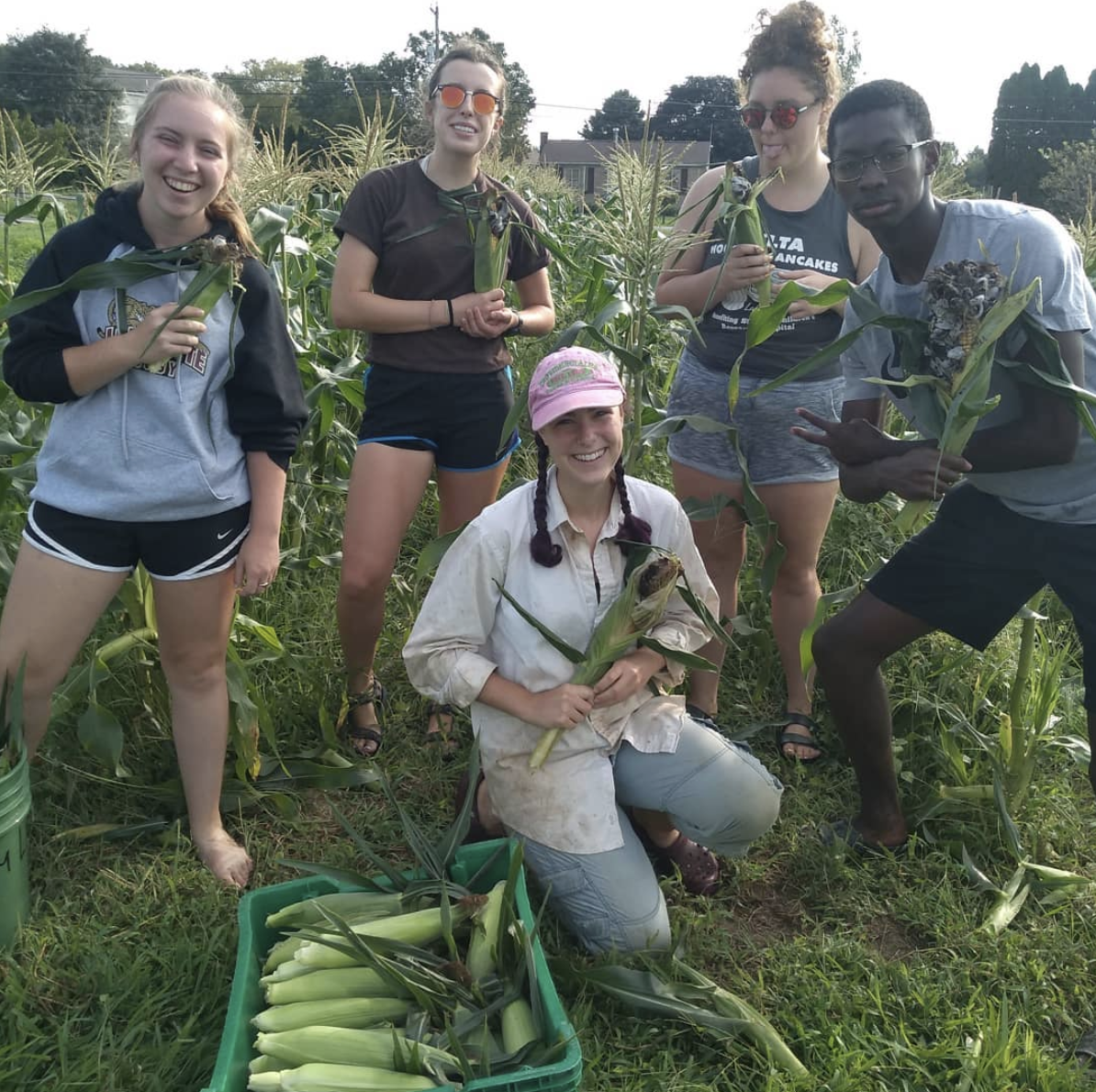 Students worked at LaFarm throughout the summer. (Photo courtesy of @lafayettecollegefarm)

Although there are fewer students on campus, summer is LaFarm’s time to bloom.

LaFarm, located at the Metzger Athletic Field complex, grows produce for both the Lafayette and Easton communities and is an essential part of the college’s efforts towards sustainability, according to their website.

The farm grows a wide assortment of produce. This year the biggest crops were tomatoes, peppers, beets, watermelons, cantaloupe, winter squash, sweet potatoes, potatoes and flowers, according to Assistant Director of Food and Farm Lisa Miskelly, although the farm grows about twenty other crops as well.

Miskelly explained that the college’s dining services, generally a large market for LaFarm produce, has much smaller orders in the summers. However, dining services had previously expressed to LaFarm that they had a need for more fall food.

“We’re focusing on crops that can grow during the summer months and then give to dining during the fall months when students are here,” Miskelly said.

For instance, the farm harvested a large order of winter squash this year, as well as sweet potatoes, which the dining halls are unable to get locally from another farm, according to Miskelly.

“It’s definitely a goal and something that…I am thinking about with a lot of the student leaders who are involved in the farm, is how else we want to market our vegetables in the summer. In particular, right now, we really don’t have an outlet for the month of June, so we donate,” Miskelly said.

Extra food grown in the month of June is often donated to the Easton Urban Farm, to be given away at their food pantry.

“It would be nice and a lot easier for planning purposes if we had places for the food to go for the whole of summer that wasn’t us trying to connect the dots…we are working on developing a better plan for next summer of figuring that out,” Miskelly said.

While more food is donated during the summer, the farm intentionally grows produce to be donated on a regular basis.

“We grow specifically for donation. A lot of times, farmers think of donating as for the extra food that you can’t sell, but that is a primary market for us,” Miskelly said.

A new feature this semester was the creation of the LaFarm sandwich sold at the new ECO Cafe.

The sandwich features produce from the farm that changes based on what is available in that season. For instance, while the sandwich featured zucchini in the cafe’s first week of opening, it now has butternut squash.

This summer, six students worked directly for LaFarm, and four EXCEL scholars worked on the farm as part of their research.

Along with working at the farm, the EXCEL scholars also worked at the Vegetables in the Community program, a vegetable stand set up in the Easton community on Thursday evenings in the summers. The stand runs on a donation-based model, so that community members can have access to produce without worrying about the cost.

Nicole Ducret ‘21 participated in this program. She explained that she enjoyed getting to meet people within the Easton community and educate them on the produce she had helped to grow throughout the summer.

Ducret also enjoyed her time doing research at LaFarm and the Easton Urban Farm on the South Side of Easton.

“It was an amazing experience because you get to wake up and go farm. It’s very social if you want it to be, so I had a lot of fun with [Miskelly] and my research partners…It can also be a quiet time to reflect, it’s kind of like meditation, when you’re doing something, you’re working with the Earth. It’s very rewarding,” Ducret said.

Addie King ‘21 also worked as an EXCEL scholar this past summer. King, an EcoRep on campus as well, said she has specific sustainability interests in food and farming, and that one of her goals in the next year or two is to have a better understanding of how a farm functions year-round.

“I enjoy having more of a management understanding of it…I also like being outside and doing the physical work as well,” King said about her work at the farm this summer.

EXCEL scholar Isaiah Moore ‘22 had very little farming experience before this summer, but that he found the work of the farmers he observed “inspiring.”

“The dedication that [the farmers] had, just being out in the fields every day, doing the dirty work, they don’t have these big machines, they’re the ones out with their hands, picking individual weeds. So seeing that dedication that it takes and the passion was eye-opening,” Moore said.

Elise Hummel ‘22 worked directly for LaFarm this summer from late May into August, and had the opportunity to see the seeds she put in the ground grow and then be sold at the market.

“I think it’s really cool being able to walk into the new cafe…and being able to see the sandwiches with only LaFarm vegetables, and it’s like ‘oh, I did that,’” Hummel said. “You feel good knowing that the food that we have at Lafayette is one, supporting local farmers, and two, helping the environment because it’s all real, whole food.”

Miskelly said her goal for students who work at LaFarm is for them to feel connected and engaged with the work that they are doing.

“I feel like I make [the work] what it is, which is a difficult job that is extremely meaningful and that is such an important way that we can all be connected to the place that we live,” Miskelly said.

“[Miskelly] brings such a positive energy to everything that we do,” Hummel added.

“The farm is the students’ farm, it’s not my farm. I manage it, and I help to direct what happens there, but I really think the farm is and should be a place that all students, faculty and staff can be a part of,” Miskelly said.