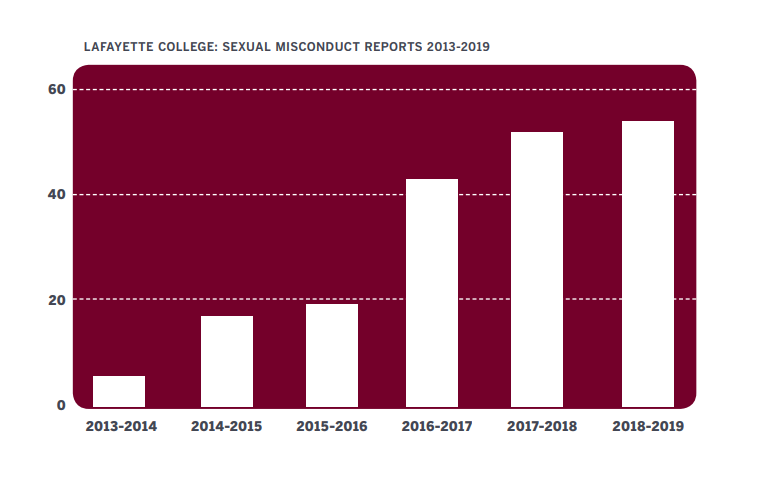 The number of reports of sexual misconduct have increased significantly since 2014, which may be due to increased means of reporting. (Graphic Courtesy of the Office of Educational Equity)

The first ever annual report from the Office of Educational Equity, published with the effort of increasing transparency, revealed 52 instances of sexual misconduct reported to the college for the 2018-2019 school year, more than double the number reported in 2015.

The purpose of the document, according to Jessica Brown, Director of Educational Equity and Title IX coordinator and primary author of the report, is to “provide information to the college community on these issues, including the type and frequency of reports to the Educational Equity office.”

“I receive many inquiries about the number and types of reports my office receives,” Brown wrote in an email. “The goal of releasing this information is to answer some of those questions and provide the community with information about what happens with sexual misconduct reports the college receives.”

The report also notes that there is not evidence “to indicate that the number of incidents on campus have increased in the last three academic years.”

Vice President of Student Life Annette Diorio said that, based on national statistics on sexual misconduct, that incidents are still under-reported on campus.

“I think it is good if more people are getting connections to resources, and understanding their options,” she said. “I imagine eventually…[the number of reports] would level out, although…what I’m hoping is eventually we have an environment that is…completely free of discrimination.”

President Alison Byerly said that the document was produced largely in response to requests for information about the types of reports, and was part of a continued effort of transparency from the college.

“I think it’s always the case…that people often have questions about processes that are, by their nature, confidential,” she said. “And so people may not have a sense of…what is the scope of [a problem] on campus? Or…what are likely outcomes or what sorts of things happen?”

Another factor that motivated the creation of the report, according to Diorio, was feedback from both the Presidential Oversight Committee on Sexual Misconduct (POCSM), as well as students who voiced interest in such a report last May. Members POCSM have been meeting during the summer, and plan to collect feedback from the community on policy and procedural changes to the reporting process.

When reports come in to Brown’s office, the reporting party has the option of pursuing a formal resolution, which results in an investigation. If the results of an investigation deem a formal conduct hearing to be necessary, a hearing panel is assembled to determine whether school policy was violated, which could result in sanctions.

Because so few cases go through the entire student conduct process each year, the document included only aggregate data on sanctions, starting from 2014. Of the panel hearings since 2014, 76 percent resulted in a responsible finding, meaning the panel determined a violation of school policy had occurred and issued sanctions.

Brown said that the information included in the report was determined primarily by inquiries her office had already received.

“I included data based on the types of questions I’ve received in the past (e.g. number of reports, type of reports, location, etc.), while trying to ensure that no individually identifying data was released,” she wrote.

Diorio also noted that the school previously posted a report in the library listing conduct sanctions and other information on sexual misconduct, but decided to discontinue the program because the structure of the report gave away too much information.

The report was released together with the start of the new SMART advisor program, which will phase out the old SASH Advocates program and allow students access to trained faculty and staff for confidential reporting.