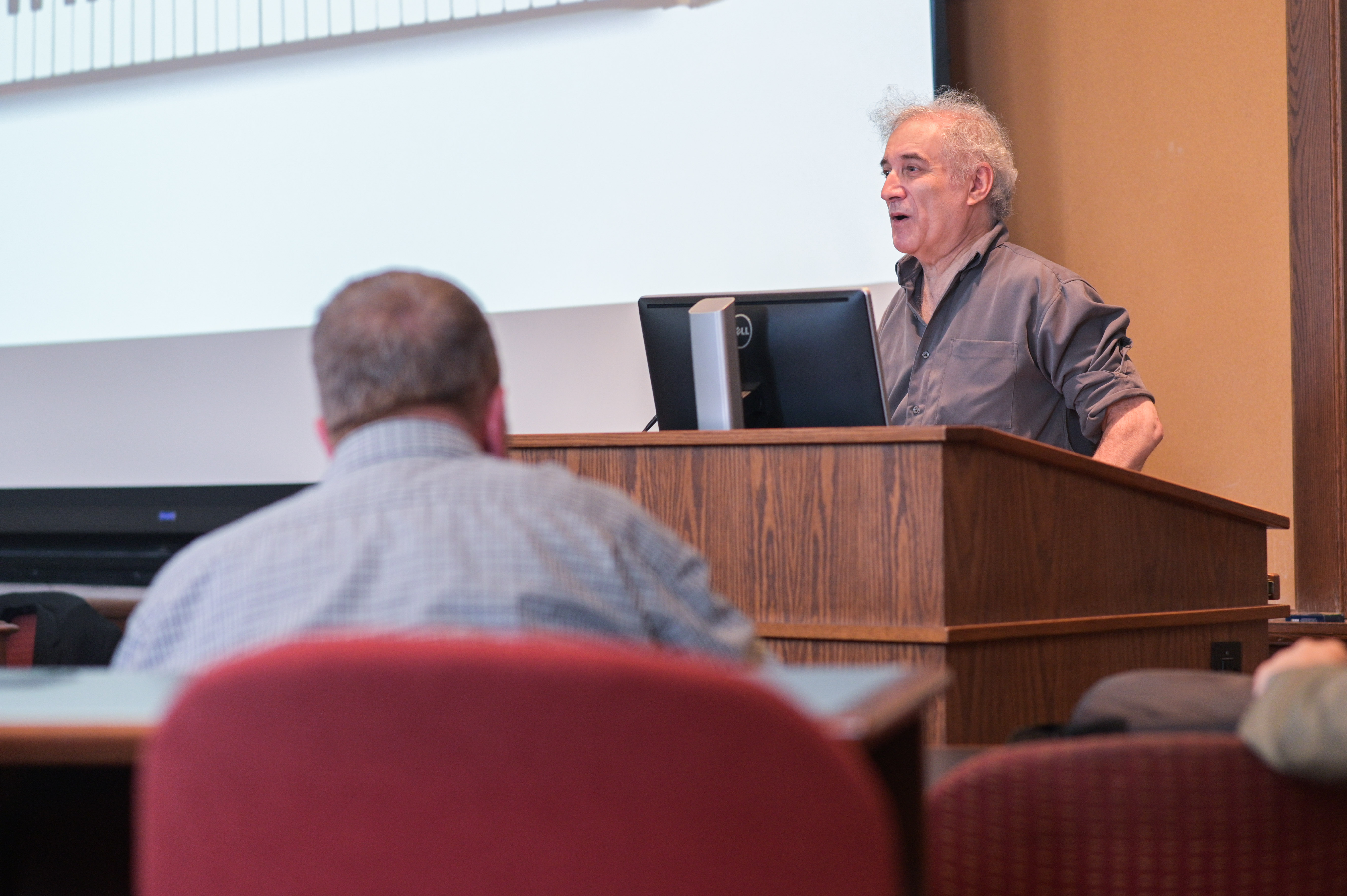 Larry Fast ’73 discusses the history of technology in music. (Photo by Brandon Marin ’22)

Throughout his experience in the music industry, Larry Fast ’73 has witnessed the effects of technology on the evolution of music and the careers of those involved in the industry, including himself.

Fast, who spoke on Wednesday at the college, is a historian, technologist and musician who has recorded many albums and CDs since spring of 1975. In addition, he has contributed to the music of Peter Gabriel, Bonnie Tyler and Foreigner.

He also has an established career in history. Currently, Fast is associated with the Thomas A. Edison Papers project at Rutgers University.

During his time as a student at Lafayette, Fast majored in history, as well as being involved with the WJRH radio station.

In his talk, Fast walked the audience through the world of technology, from the analog age to the digital. He clarified that the shift was not as straightforward as one may think.

Drawing on his history background, Fast described the development of electrical experiments from their earliest beginnings in the nineteenth century. He reflected on the contributions that the telegraph, the telephone and the phonograph brought to society.

Afterwards, Fast focused his talk on the new musical instruments that were invented during this time. He discussed the Telharmonium keyboard invented in 1896, as well as the theremin, the Mixtur-Trautonium, the Ondioline and the Novachord.

Eventually, Fast said, the music world began to make the switch from analog to digital. The change was gradual. For instance, when Fast was working with Peter Gabriel, he used both analog and digital programs.

By 1982, most of electronic music was done digitally, however, Fast said.

One audience member asked where Fast stood on the sound of the early synthesizers, which he described as having a “cheesy” sound.

Fast described the music technologies available as tools and said that he is a “digital proponent, when it’s done right.”

Another audience member asked what happened around the year 1980 to escalate digital music advancement. Fast explained that the capabilities of chips improved by then, while also crediting the era as a period where engineering became “really creative.”

Music professor and composer Kirk O’Riordan thought it was “nice to see somebody” with the experiences Fast has had.

“He’s had fascinating experiences. He’s going through the business at a time when things were changing very quickly, and he’s had an opportunity to get in with all the front-end gear and all the really high-end stuff,” O’Riordan said.

O’Riordan said that whilePeter Gabriel was among the first to use a Fairlight synthesizer, eventually the sound was on “virtually every 80’s pop album.”

“To be able to be on the front edge, [to] be one of the pioneers who learned how to use it and apply it is a very cool thing,” O’Riordan said.

Stefano Mancini ‘22 said he enjoyed the talk as well.

“I found Larry Fast’s narrative about how the road from analog to digital technologies is not as linear as many think it to be really compelling, plus I appreciated that he has done so much powerful work not only with artists, but with organizations in favor of historic preservation,” Mancini said.