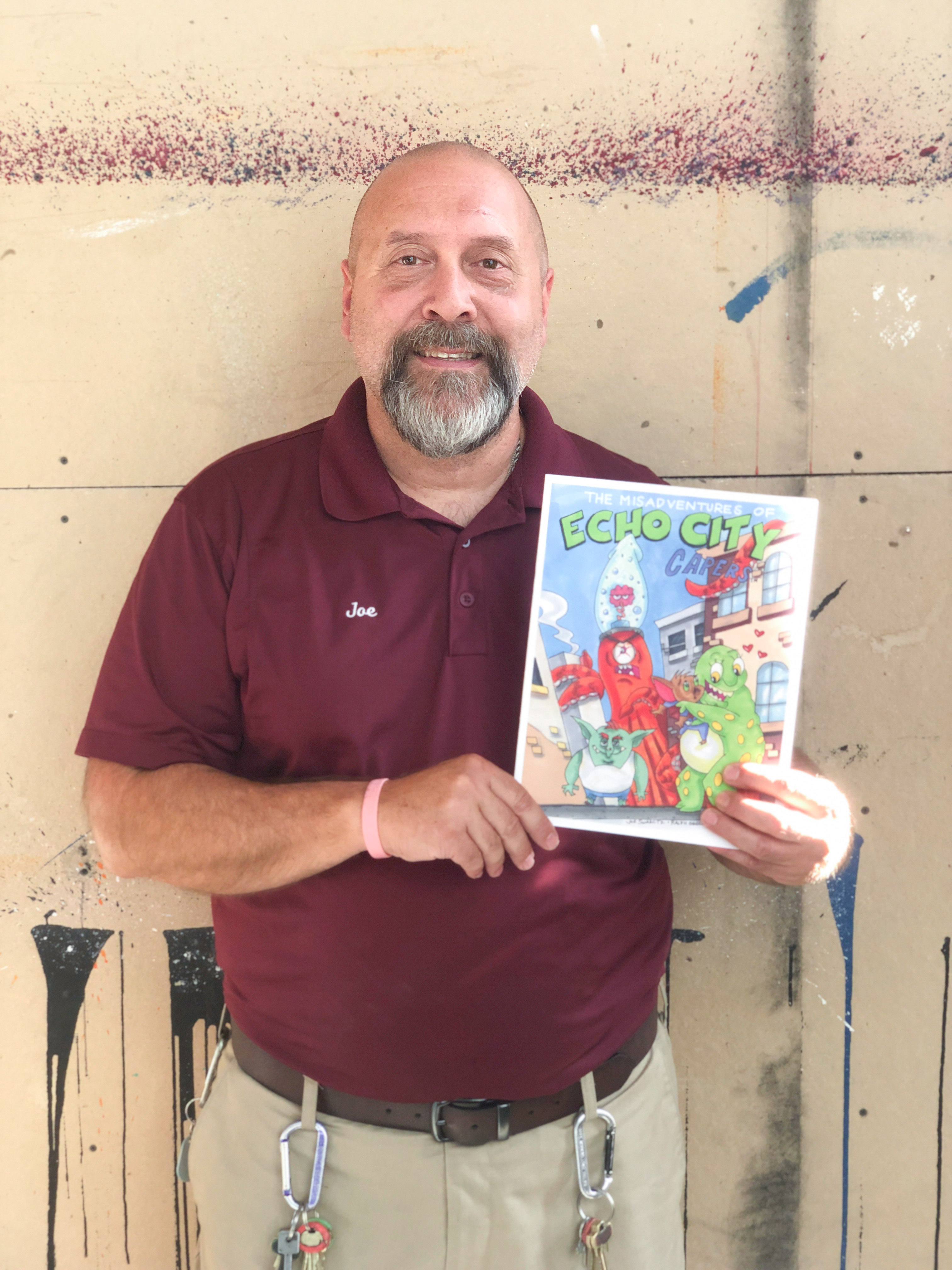 Joe Swarctz said ‘The Misadventures of Echo City Capers’ series has been in the works for 20 to 30 years with different incarnations. (Photo by Mario Sanchez ’21)

What happens when three friendly, clumsy and lovable monsters just want to go out trick-or-treating and enjoy Halloween night as much as humans do? That is the question that Joe Swarctz and Ralph Greco Jr. post on the third issue of their children’s book series “The Misadventures of Echo City Capers.”

The main characters in the third issue, called “Follow Boo, Follow Me,” are the three friends: a dinosaur, a squid and a troll. Together, they decide to come out and join the fun of Halloween. However, that quickly backfires as citizens of Echo City run away from them while yelling in hysteria.

Soon, citizens rally to get rid of the monsters as Mayor Jones runs for re-election. After the monsters realize that they are being talked about by the media, the dinosaur says to her two friends, “Why? All we wanted to do is trick-or-treat too!”

The story further follows the protagonists as they create unintentional chaos in Echo City. “So you know…without getting too political [the message is that] everybody’s equal,” Swarctz said, adding that the goal of these books aren’t to be political, but to be “lighthearted and fun.”

“That’s why we’re kind of doing it for…kids…between the ages of seven and 12,” he said. “There’s no violence in it, there’s no bad language, there’s not even any fighting in it. Just kind of silly, slap-sticky type of humor like ‘Bugs Bunny,’…and ‘Wile E. Coyote and the Road Runner.’”

Swarctz and Greco have known each other for 40 years, but lost touch for 25 years. After reconnecting, the old friends simply wanted to get food in Easton when one day Swarctz showed his illustrations to Greco and the idea to work together sparked. While Swarctz illustrates the comic books, Greco writes the scripts. Together they collaborate and come up with a fully fleshed storyline.

“Having a friendship back is…the biggest blessing,” Greco said.

It isn’t a typical career decision as a college custodian, however, for Swarctz, it was a matter of talent and timing.

They decided to call the series “The Misadventures of Echo City Capers” because they wanted to captures the different stories of Echo City residents rather than one sole character.

“Each book is a different story, it features a new villain [and they] are the main antagonist of the stories,” Swarctz added. “But the villains are kind of funny and goofy and bumbly, they almost make themselves get captured. The hero of the story always usually shows up at the end.”

Although each book takes about two months to create from idea to final product, his work expands to more than two months despite his full time as a custodian at the college.

After graduating high school, Swarctz attended school for cartooning and ended up doing some work in some New York City studios. He said that illustrating comics is his passion.

He said that his current focus on illustrating children’s comic books is because children “have the ambition and the hunger to learn and read. And like I said, our books are very positive.”

In the decade that Swarctz has done custodial work for the college, mainly on the arts campus, he has had the opportunity to connect with students from their first year to senior year, as well as faculty and staff. Once, Swarctz said, a group of juniors and seniors even took him out to dinner.

“That’s why I like working down here at the arts campus, because [art is] most of the students’ goals,” he said. “They want to do what they love…. So I’ve been doing this since probably the same age as you guys. So it’s just just been a love of mine.”

Swarctz added that Jenn Burkhart ‘19 helped with coming up with the idea of the squid character, and Swarctz’s daughter, who is now 20-years-old, came up with the dinosaur.

In the series, there are currently four books finalized, which include Issue 1 “Magic Carpet Ride,” Issue 2 “Color My Curls,” Issue 3 “Follow Boo, Follow Me” and Issue 4 “Age of Aquariums.” Although the series is being self-published and expenses are coming out of Swarctz and Greco’s own pockets, they are on their way to finalizing a sixth book and want to reach out to publishers as well as attend publishing conventions in hopes of the series getting picked up.

“Our ultimate goal is hopefully, is to find a publisher, or independent publisher. So then they could distribute it better,” he said.

“Right now, we’re just looking to get as much attention as we can and get through the six books,” Greco said. “Eventually we hope to find an agent or…[a] publisher to take the books as they are…or get put them together and make a full book out of it.”

Swarctz and Greco have a couple of shows coming up in Easton including one in the SmARTivities Showcase where Greco will read the books while Swarctz will show the illustrations, as well as teach children how to draw some of the characters.

Other venues include the Crayola Experience in October and The Great Allentown Comic Con in November. Additionally, the books are currently available in book stores such as Book & Puppet Co., SmARTivities Showcase, JAF Comics, and other venues in New Jersey. They are also available on their website www.echocitycapers.com.

Correction 09/10/2019: Originally, this article stated that Joe Swarctz and Ralph Greco Jr. will showcase their work at the Boston Book Festival in October. The article has been modified to reflect changes.