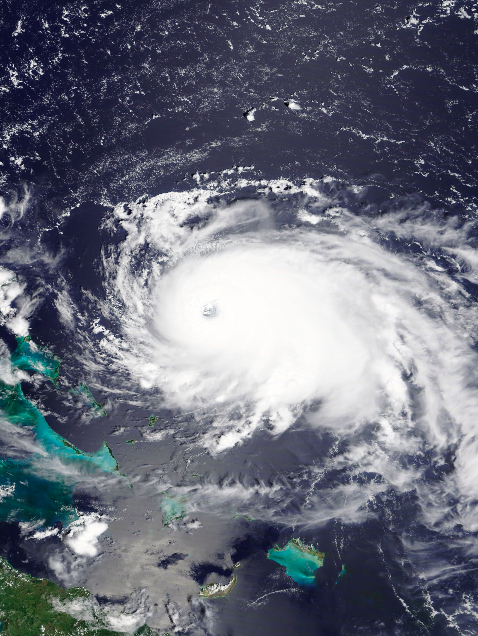 Hurricane Dorian is the first major hurricane of the 2019 Atlantic Hurricane season with winds topping out at 183 miles per hour. (Photo courtesy of Wikimedia Commons)

Over the past week Hurricane Dorian has devastated the Bahamas and swept up the southeast coast of the United States. With an increasing frequency of the likelihood of storms in recent years, there is more focus on how climate change is affecting these weather events.

Environmental humanities professor Sarah Dimick said that, from a humanitarian perspective, there are few weather events that are not influenced by climate change.

“It’s fairly possible at this point to say that there really isn’t such a thing anymore as a natural disaster, no disaster is natural,” Dimick said. “At this point, most of our weather events are tinged by carbon emissions.”

Andrea Armstrong, Assistant Professor of Environmental Science and Studies, further explained that through scientific reports such as the National Climate Assessment, there are trends showing that storms are intensifying.

“We know that with these hurricanes, they are releasing more rainfall,” said Armstrong. “Something that I love to point out in my classes is that the National Weather Service had to change the color bar scale that they use to depict levels of precipitation.”

This increase of rainfall leads to a lot of secondary effects–such as inland flooding–causing large amounts of damage. In addition to increasing flooding, the east coast has a lot of aging infrastructure that is not designed to handle these weather events, Armstrong explained.

“Our storm water infrastructure is really based to remove water from the landscape as fast as it can and when storms land with increasing moisture, then the systems cause our water natural waterways to flood really quickly,” Armstrong said.

Dimick explained that once infrastructure is damaged and people are hurt and misplaced there is often a disconnect with recovery and rescue services in certain areas, especially outside of the United States.

“Regions like the Caribbean, where we see less attention paid, I think often are regions of the world that have been deprived of political power through colonialism,” Dimick said. “Oftentimes, the infrastructure that should be there in terms of relief efforts, is not.”

The aftermath of Dorian in the Bahamas was devastating, with the death toll reaching 20 as of Wednesday night and several people still recorded missing, according to the New York Times. Many Bahamians are also without hospitals, or even a place to live, and around 70,000 in need of lifesaving aid.

Dimick further explained that mortality rates go up in areas where relief efforts are not focused.

“If it takes five months to get electricity, that will see a lot more deaths, then if it takes 24 hours. So that’s something I think to consider as we think about where a hurricane hits,” Dimick said.

This can be seen in the aftermath of Hurricane Maria in 2017, which made landfall in the U.S. Virgin Islands, Puerto Rico, and Dominica, Dimick said. The preliminary death toll from Hurricane Maria was small, but Puerto Rico continued to calculate deaths that occurred over the course of the following month.

“Then it just ballooned into like this pretty devastating mortality count. I think when we think about hurricanes, they often get a lot of attention, right when they hit,” Dimick said. “But the aftermath of hurricanes is really where we see some of that devastation play out and those death counts really accumulate. But by that point, the news sometimes isn’t there as much.”

With an increasing likelihood of more frequent weather disasters there are two main lines of action that must be taken, Armstrong said.

“…One is adaptation. To adapt our infrastructure, adapt and move away from coastal and floodplain development…but the big one is climate mitigation,” Armstrong said.

Armstrong explained that it is essential to reduce emissions and remove greenhouse gases from the atmosphere. However, both methods of action must be taken.

“It’s a two-pronged approach. One without the other doesn’t make sense at this point in time,” Armstrong said.