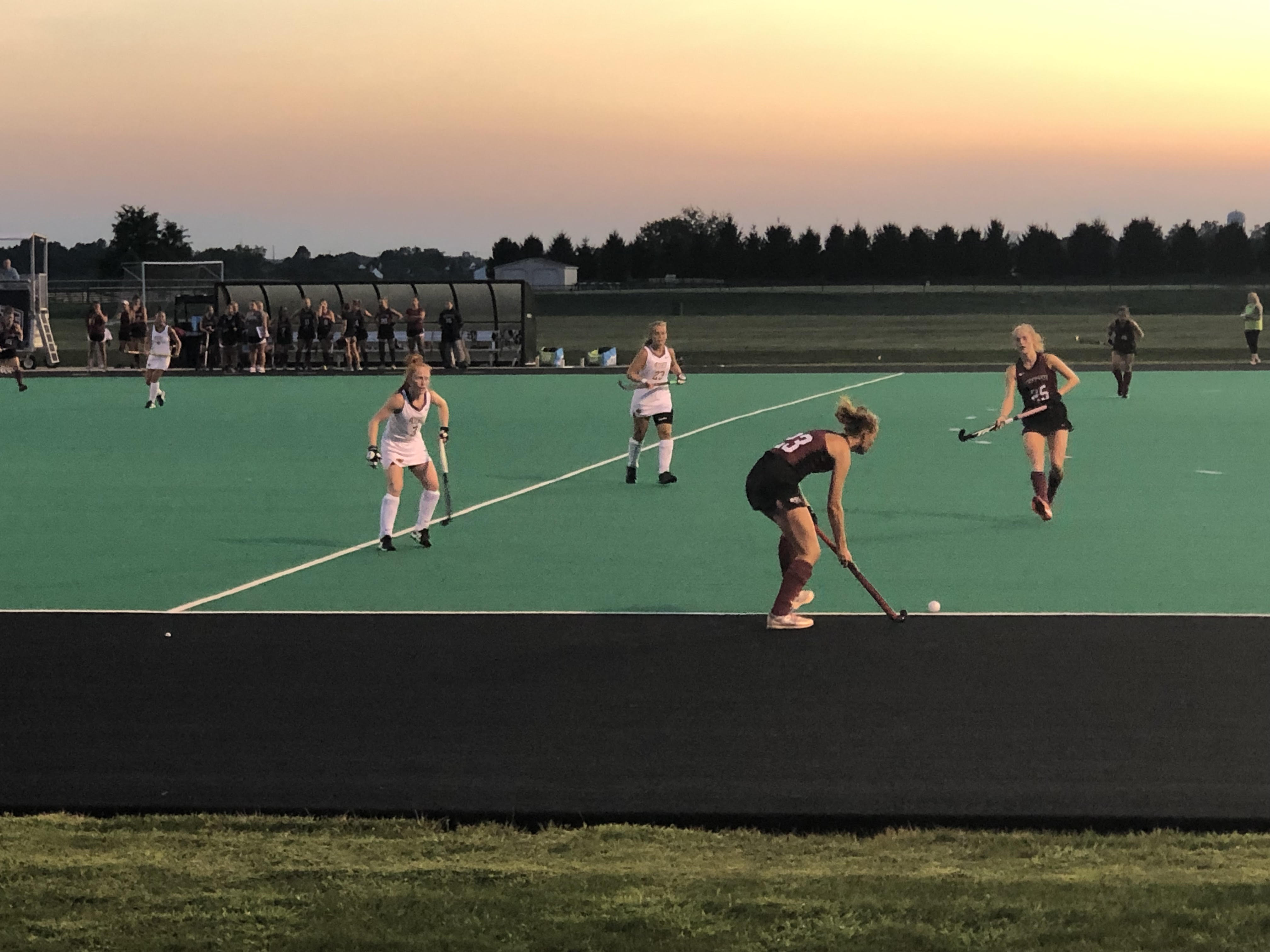 The Leopards won their home opener, staving off a late comeback attempt by VCU. (Photo by AJ Traub ’20)

The Lafayette field hockey team is off to a 1-1 start after splitting a pair of non-conference games. Last Friday they won their season opener at home against Virginia Commonwealth University 2-1, before losing a close game at 18th nationally ranked Syracuse after two overtimes on Monday.

The home game was a “White Out” game, and quite a few fans had t-shirts given out by the Leopards Lair ahead of the game.

“I think the fact that there were so many people watching, especially student athletes, gave the game a very special atmosphere,” senior defender Lisa van der Geest said. “Even though not everyone in the stands knows the exact rules of field hockey, they know when it gets exciting. They know when our team on the field needed an extra push.”

The home fans got the first big cheer in the third quarter when senior forward Sam Di Maio got the Leopards on the board off a pass from freshman forward Felicitas Hannes.

“We definitely have power and skill in our attackers, but in the way we score we have a lot of depth,” senior midfielder Caroline Turnbull said.

“For us to be super confident and score on our first opportunity will make us dangerous for the rest of the season,” she added.

The Leopards were denied a second goal shortly after as it was waved off by the officials, though the refs told the team after the game that the goal should have counted, according to three of the players. After a penalty corner, a goal can be waved off if it was the first shot after the play, but the refs didn’t realize right away that it was the second. Since there was no video replay in the first game, the call could not be overturned.

Hannes tacked on the official second goal of the day for Lafayette in the fourth quarter, unassisted.

A flurry of offense from VCU put them on the board, but the Leopards’ defense held on at the end. Senior goalkeeper Sarah Park made three saves in the quarter on six shots in the game (four on goal) by the Rams.

“The freshman class has already made a huge impact on the team, especially in the backfield we have two freshmen [defenders Simone Hefting and Sydney Woolston] starting who have played two very solid games for us so far,” van der Geest said.

“Last year we would oftentimes pull one of our midfielders back to fill a spot in the backfield, but [the] two pure defenders have immediately been able to get on the field and make a positive impact,” she added.

Against Syracuse, the Leopards got on the board in the first four minutes with Hefting and van der Geest assisting Turnbull for a goal after a penalty corner.

“Going into [the game], [our head coach Jennifer Stone ‘04] was telling us ‘I think we can beat Syracuse,’” Turnbull added. “It’s nice to hear the confidence. Around campus, people were excited for us, no one thought we were going to get blown out. We could keep up with them.”

Lafayette struck again in the first quarter, with a goal by junior midfielder Audrey Sawers.

“I was very shocked because I didn’t try to shoot on goal,” Sawers said. “I was trying to cross it to one of my teammates, and a defender got a clip on it and it went flying past the goalie’s shoulder and into the goal. I was surprised when it went in, but super excited to be up 2-0.”

According to Turnbull, Stone told the players at halftime that no one should be surprised they were leading 2-0. She said their lead wasn’t luck and it was due to how well they were playing.

Syracuse came storming back to tie the game, before eventually breaking the stalemate in the second overtime to overcome Lafayette’s early lead.

“Something we need to focus on very much with this team is being consistent for 60 minutes, because we can’t afford to have a dip in the middle of the game that lets our opponents get back in the game,” van der Geest said.

Sawers says the goal for the team is always to win the Patriot League Tournament, but they are taking the season game-by-game since the team still has improvements to make ahead of conference play.

“The work rate from the forwards is crucial because they’re hungry for the ball,” she said. “They want to get in the circle and score. It’s important for the midfield to work together and work with the forwards to attack as a unit.”

Sawers says the offense is benefitting from defenders stepping up and playing well.

“It gives us the opportunity to play higher up on the field and take more risks attack-wise, and to get more results,” she said.

The team will face Appalachian State tonight at 7 p.m. before facing 20th nationally ranked Liberty on Sunday with both games in Lynchburg, Va.

“It’s definitely going to be a huge advantage for us having already played Syracuse, knowing the tempo we played against Syracuse will be probably similar against Liberty,” van der Geest. said. “Having had the taste of winning but not the actual win is only going to make us more eager to beat a top-20 team next time.”