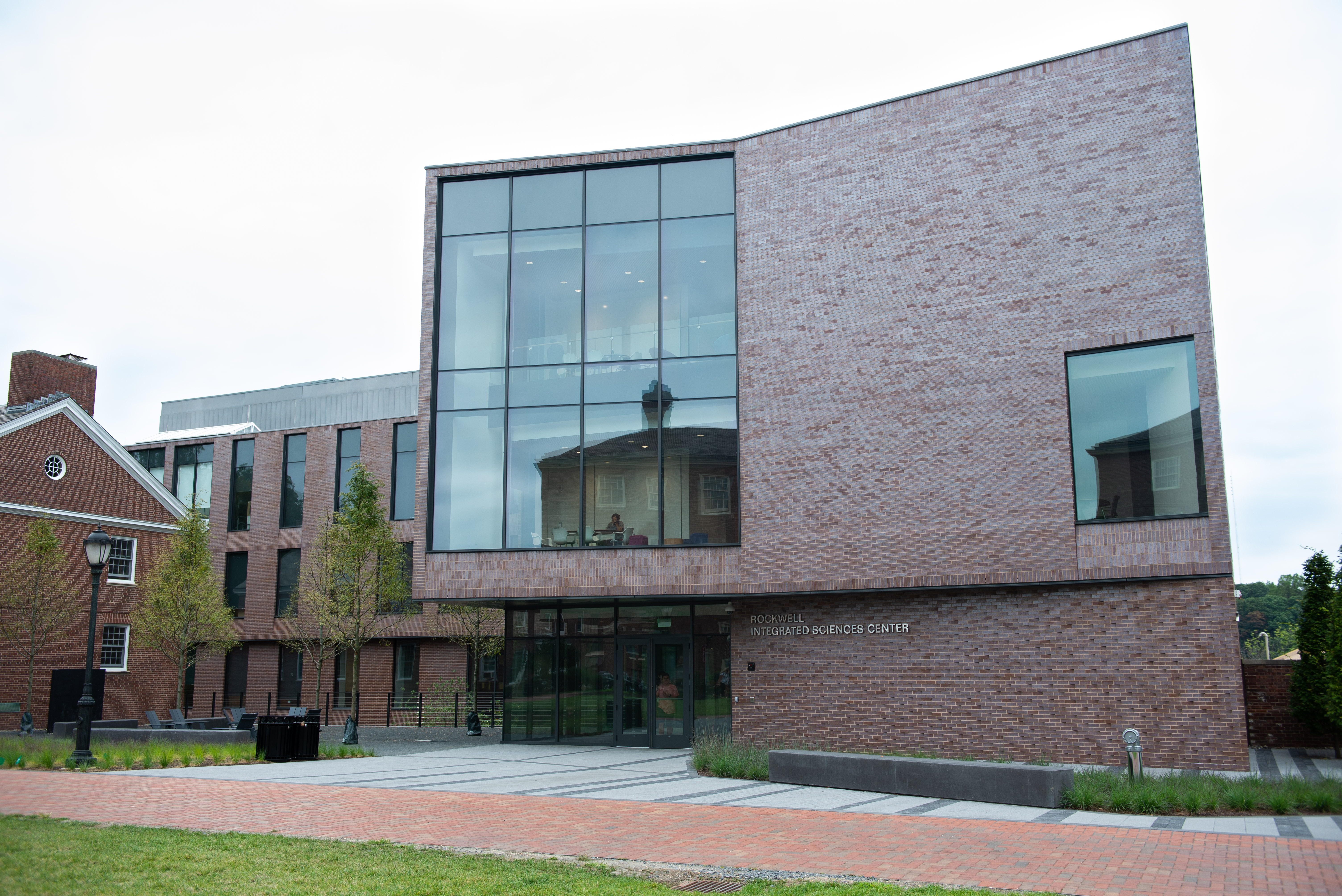 The 100,000 square foot building will house many of the college’s STEM programs. (Photo by Brandon Marin ’22)

The Rockwell Integrated Sciences Center opened its doors for classes for the first time on Monday, as students and faculty alike took in the largest capital project in the history of the college.

“It’s a beautiful building,” Donna Heagele said, academic coordinator for environmental studies, computer science and STEM. “Everybody seems to be settling in well and enjoying it here.”

Heagele, who had just moved into her new office, was impressed with how environmentally friendly the building is.

“I think it’s definitely one of the things I’ve noticed is its energy efficient,” she said. “They have set the thermostat for a particular temperature and we can’t change it.”

The building is also constructed with expansive windows to allow sunlight to illuminate the atrium, and natural ventilation to cool the classrooms and study spaces.

The Dyer Center for innovation and entrepreneurship is located on the ground floor and is joined by the Daniel and Heidi Hanson ’91 Center for Inclusive STEM Education, which enables more women and underrepresented minorities to join STEM fields.

“[Computer science] is growing, we’re at 100 students now, odds are we’re going to grow past it,” said Jeffrey Pfaffmann, associate professor of computer science. “The teaching spaces are bigger. We wanted to create them so they would be very adaptable and be able to adjust them in different ways.”

Pfaffmann said that there were “a lot of hiccups” in the process of moving from Acopian to RISC, but noted that it went as well as could be expected with such a large project.

In the physical building space, there have still been lingering issues with some of the technology in the classrooms and study spaces.

Heagele said that the teachers’ key fobs, which are programmed to open specific rooms in the building, have not been working for some professors.

Michael Baylor ’21 said that there are some “glitches” and “technical issues” that need to be resolved, such as a power cable hanging in front of the projector screen in one of his classes.

“There’s always growing pains, but those are to be expected,” said Roger Demareski, vice president for finance and administration. “But I think overall, it couldn’t have been done smoother.”

For the college’s administration, the RISC is a culmination of many years’ work in the proposal, design and construction of the building.

“We just feel, you know, really excited to have a project that has been many years in the making finally realized,” President Alison Byerly said. “It’s…very exciting to actually see it come to life.”

Students are able to relax on comfortable chairs on the new outdoor patio or enjoy a smoothie at the brand new ECO Café on the second floor. The nooks and small desk spaces throughout the building also provide an alternate study location to Skillman Library.

“The extra study space is really nice because the library gets pretty crowded,” Baylor said. “It’s usable space especially because they are already close to my classes. It makes it convenient.”

Byerly said that creating lounges and cooperative spaces was a priority for the design team of the building.

“That kind of open space in the [atrium] is meant to make it easy to see people you know, to draw people into conversation,” she added. “It’s got a lot of central space that’s meant to draw people together.”

“I think they did a good job of making it a building that you want to be in,” Katherine Smith ’20 said. “It’s cool that I get to see what my tuition money is going to, it’s nice.”