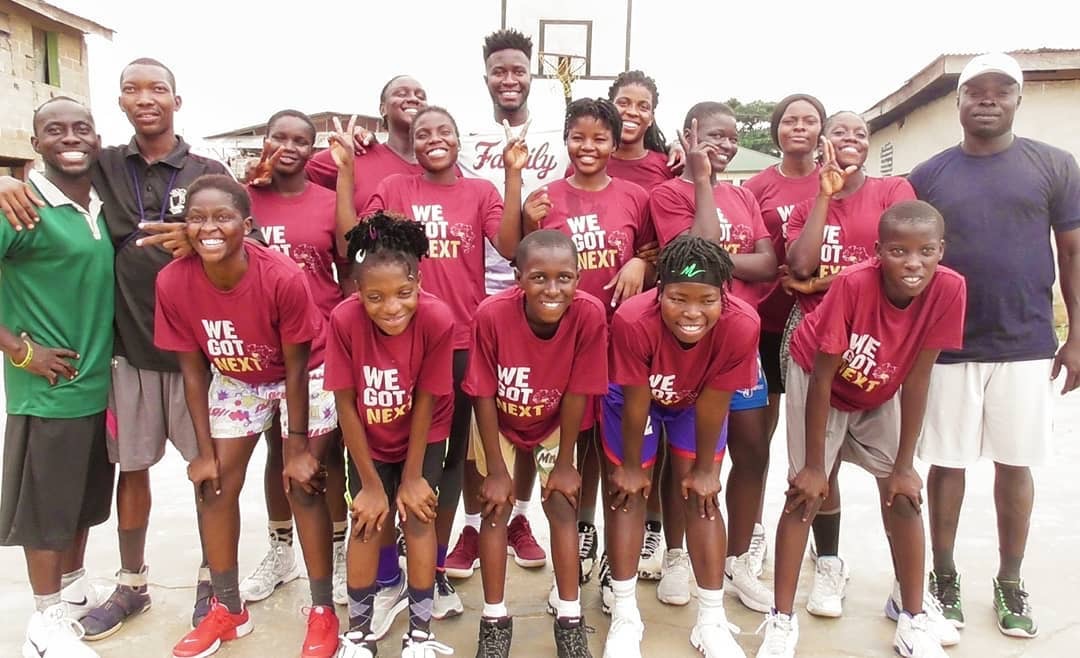 After growing up in Nigeria with few opportunities, Mike Anekwe ’22 knew he “wanted to give back to an underprivileged community.” In March 2019, the Lafayette basketball player, 19, put his thoughts into a plan for action by starting the Anekwe Foundation, with the goal of growing “the game of basketball, not just in Nigeria but in Africa.”

Anekwe’s plan started with asking basketball players he knew if they had any basketball shoes they didn’t need anymore. Once he realized that the Student Athletes Advisory Committee (SAAC) runs a shoe drive each year, he formed a partnership with the organization with the help of then-SAAC president, Rachel Bird ‘19.

“When I got the shoes together it was about 200 pairs of shoes,” Anekwe said. “SAAC offered to help me ship them. They shipped the shoes back to Nigeria. When I got [to Nigeria], I printed t-shirts for the camp, got brand new basketballs for the camp, and got refreshments for the kids.”

Anekwe created a logo for the shirts that he distributed at his camp, and funded the t-shirts, basketballs and refreshments himself with his earnings from a summer internship in Allentown at City Center.

The camp was run by Anekwe himself with the help of additional coaches. According to Anekwe, over 150 kids participated to take part in learning about basketball through the very drills Anekwe does on the Lafayette team.

Next year, Anekwe said he wants to double the number of participants, which will also require increasing the resources he was able to provide.

“Not every kid that came to the camp this year got a t-shirt, but everyone got shoes,” Anekwe said. “We want to get more basketballs, more shoes.”

“I think because it was self-funded, there were limits to the things I could do,” he added. “This year I’ll try to do fundraising from different places.”

Anekwe said there are other basketball camps besides his in Nigeria, but they tend to be invitation-only for “elite” players. Having not played in one of those camps, Anekwe wanted to give more kids an opportunity to develop their skills.

“You have to be good to a certain level to get invited [to the elite camps],” Anekwe said. “Only a few get invited. They get the gear and the stuff. I wanted to reach a lot more kids who were maybe not as good as the elite-type kids.”

Anekwe said that since basketball is unpopular in Nigeria, there aren’t a lot of people around to teach fundamentals to the kids who are interested, so he chose to start by teaching the basics.

However, the game is growing in Nigeria, according to Anekwe, with African players on the rise in the NBA, including Nigeria’s own Al-Farouq Aminu of the Orlando Magic and Josh Okogie of the Minnesota Timberwolves, as well as other players like the Philadelphia 76ers’ Joel Embiid and NBA champion Toronto Raptor Pascal Siakam, who are both from Cameroon.

“There’s hundreds of Nigerian players across Division I [as well],” Anekwe said. “The game is growing, and we’re trying to take that knowledge back home and to grow the game back there also.”

While Anekwe had the opportunity to share this knowledge with over 150 kids, he grew especially close with a group of 12 who were going to the Mini Masters basketball tournament for kids under 12. These kids, Anekwe had learned, didn’t have the proper shoes for the competition, so he ensured that they got shoes first at the camp, and then later FaceTimed with the kids as they played in the tournament, where he said they earned third place.

“Being part of their journey is something I really cherish,” Anekwe said. “It was nice to know I did something of that magnitude. They won almost every game they played there.”

The impact of Anekwe’s efforts are clear through the reactions of his friends who have reached out about how to start their own camps as well as the reactions of those directly involved in the camp’s first successful run.

“The reactions that struck me the most were the reactions from the kids,” Anekwe said. “For some of the kids, it was their first pair of actual basketball shoes. The moment they got the shoes, you could see the reactions on their faces. It was priceless. You could tell they would stick to the game and grow their love for the game.”

“There were parents who came up to me and thanked me and told me their kids would be ecstatic,” he added. “It’s reactions like that that tell me I’m doing something that makes somebody’s life better.”

As someone who grew up in Nigeria before coming to the United States for basketball and education in California and then at Lafayette, Anekwe said he wants to expand his foundation to give others similar opportunities, athletically and educationally.

“The long-term goal is to get to a point where we can offer scholarships to exceptional kids from the camp,” he said. “As much as basketball is very important and the premise for the camp, we also stress the importance of education.”