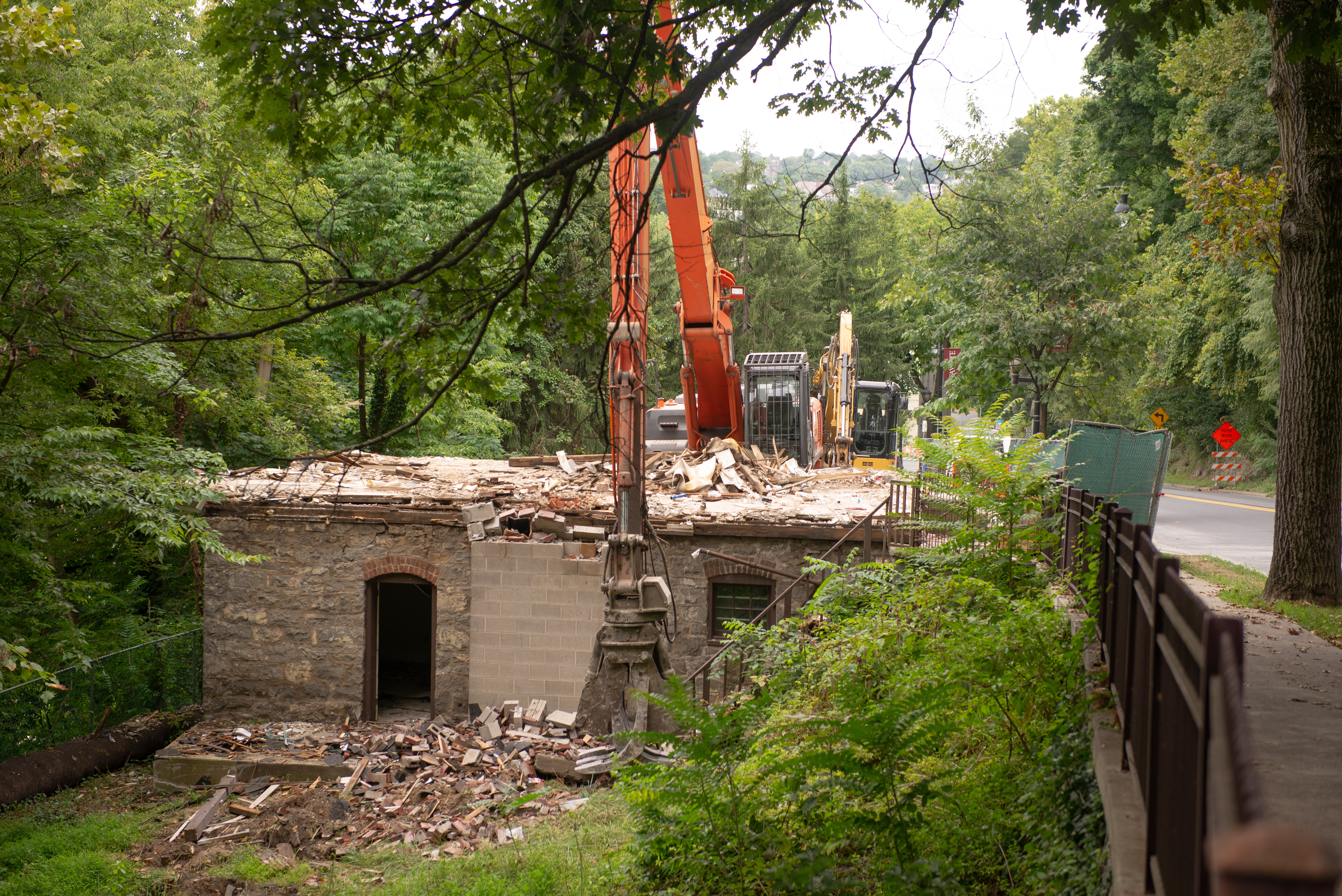 The school demolished four Victorian era houses on College Avenue due to structural concerns in the foundation and low usage in recent years. (Photo by Brandon Marin ’22)

Lafayette’s campus received a major makeover this summer while students were away, and more work is underway for the coming semester. The Rockwell Integrated Sciences Center (RISC) is now open for classes for the first time since construction began in 2017, and numerous other construction and renovation projects were also completed during the break.

Much of the construction has been related to the college’s strategic plan, a plan unveiled in 2016 with the goal of increasing affordability by increasing the student body population by 400 over the next 10 years. The McCartney street dorms, which will add 165 more beds to the college, is one of the main components of the strategic direction, in addition to RISC.

Besides the major construction tied to the strategic direction, the college has also launched several other construction and renovation projects over the summer.

The basement of the South College dorms received a significant renovation this summer, turning it from a storage space for the library into a common area for students.

“[The South Commons] is a way to expand the student space, the kind of social space in the building that we hope will be really helpful,” President Alison Byerly said.

According to Vice President of Finance Roger Demareski, the renovations are part of an ongoing project to create more common space for students to be able to “get out of their dorms” and interact with other students. This project also includes the upcoming renovations to the bookstore in the basement of Farinon, which the college plans to transform into another common space for students after moving the bookstore out of the building to the future McCartney Street dorms.

In addition to the renovations to the interior of South, Demareski said the college allocated part of the annual capital budget for repainting South’s facade and fixing any cracks in the stucco. Also underway is a courtyard at the front of South, funded by the Kirby Beautification Fund as well as a donation from English professor Pat Donahue and her husband. The renovation will include redoing the sidewalks and the creation of a larger courtyard area, as well as a stone with the Donahue’s name on it.

“It’s an extension of the community space [inside South College],” Demareski said.

The college took down four Victorian-era homes on College Avenue earlier this month, and plans on replacing the houses with a scenic overlook of downtown Easton. Despite being available to faculty members as part of the faculty housing program offered by the school, the houses have remained unoccupied for the last several years.

“So I gather that…20 years ago, those were lovely family homes that people enjoyed living in,” Byerly said. “But you know, as the traffic and truck traffic on that road has gotten…much more constant, we found that people didn’t really want a driveway that backs into that road.”

He also noted that lack of parking space and adjacency to College Avenue, which has become increasingly busy due to increased traffic from Forks Township, made the houses “extremely difficult to occupy.”

Byerly added that the sidewalks on College Avenue have been redone several times over the last few years as a result of the same erosion process affecting the foundations of the houses.

Following the demolition, the school will be removing some trees and adding a fence and some benches to create a scenic overlook. Demareski said it could provide “a little break” to students making the walk from the Williams Arts Campus back to the main campus.

Demareski said he expects the process to be done within the next eight weeks, and for the sidewalk to be re-opened in the next few weeks.

Last year, the college received a $1 million dollar grant from the state of Pennsylvania to improve pedestrian safety in the College Hill area. The school partnered with the city of Easton to apply for the grant in a so-called “town-gown” initiative to renovate the sidewalks around campus.

The initiative involved creating the College Hill Business District to allow the college and the city to apply for the grant together. Demareski said the project is largely being run by the city, and they are currently awaiting approval for many of the proposed improvements from the Pennsylvania Department of Transportation.

The primary area of focus for the improvements is the intersection of Cattell Street and High Street to allow students and community members easier access to the houses and other amenities east of Cattell Street. These improvements, which will include curb extensions and new boulevard lights, are currently planned for the spring.

The school has similar plans for other intersections in the College Hill area, including the intersection at March Street and Clinton Terrace as well as along McCartney Street. Demareski also noted the difficulty of crossing College Avenue at the intersection with McCartney street, stating that the school has proposed adding a sidewalk on the near side of the street to allow for easier pedestrian access to downtown Easton and the arts campus.

This was the second grant the college received from the state for sidewalk improvement, with the first $1.4 million grant being awarded to the school in 2016.

The Rinek Rope Factory, located on Bushkill Drive, will be receiving major renovations for use by the facilities staff, as well as for additional storage and use by the civil engineering department for larger industrial projects.

Included in the Rinek Rope Factory renovations will be additional parking spaces, as well as a substation for the Easton Emergency Squad, a partnership that was in part facilitated by the new Lafayette EMS club started last spring. Another one of the buildings will also be transformed into a so-called “maker space” for civil engineers to work on larger projects and do soil testing.

Demareski noted that many in the community expressed concerns that the college would tear down the factory buildings despite their extensive history in the area — Charles Rinek, the founder of the Rinek Rope Company, was responsible for the construction of one of the first airplanes — but Demareski said that the restoration will leave the existing structures intact.

Construction on the factory will begin “within the next month or two,” according to Demareski.