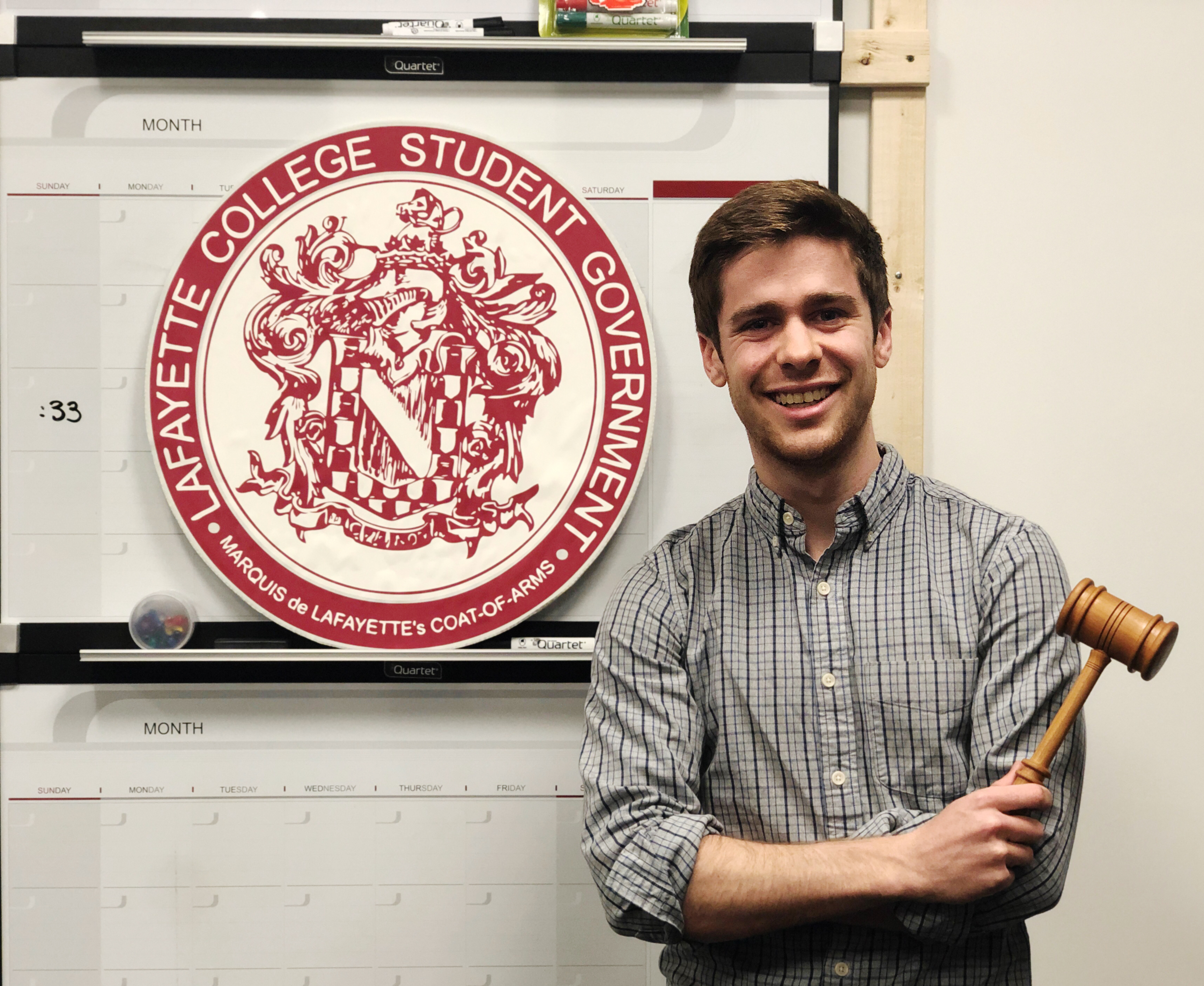 Connor Burwell was involved in student government all four years of his college career. (Photo by Elle Cox ’21)

Connor Burwell ‘19, like many other students, has seen the emergence of new structures and plans during his time on campus. Unlike others, however, Burwell has played a key role as a conduit from the students to the administration as the expansion plan, or the growth and affordability initiative, progresses.

Burwell served as the first student government president under its new structure, which tripled the number of members in the representative body.

During the first two years of Burwell’s time at the college, student government had only 15 members who ran as class representatives. Burwell was the class representative for his freshman class and served as executive secretary under then-president Bilal Akbar ’18. He also ran against Akbar, anticipating it would be his only opportunity, but lost the race.

“I think we changed in a really dramatic way,” he said. “In the previous model people, joined without a lot of intention. We basically functioned as just a purse for student organizations.”

“We were looking at peer institutions and figuring out what they were doing and we came up with some pretty radical changes,” he added. “This was all informed by my time on student government and also by the research done by the ad hoc committee.”

In addition to increasing the number of members from 15 to 45, the change also included transitioning from calendar year terms to academic year terms. This allowed Burwell to run for president for his senior year.

Of the 45 positions, only 12 are now elected, including the eight committee heads. Previously, students were elected and then assigned positions internally. Burwell said applying to specific committees was what “structurally empowered” students on student government.

“I think part of the structural change has affected the types of students that student government gets,” he said. “[Now people] join specifically to lead sustainability or athletic affairs. It draws students who are already are clued in to what they want to change.”

As a result of the new constituency and the structural changes, Burwell said the role of student government has been placing less emphasis on governance and more on peer advocacy.

“Now student government is almost a misnomer,” he said. “Governance is really only done on two committees. We govern on student organizations and we govern on budgets…but all the other ones are just advocacy.”

During his time as president, Burwell and the rest of student government have also acted as a conduit between the student body and the administration during the ongoing expansion. Overall, Burwell said he feels the college is “headed in the right direction.”

The goal of the strategic direction is for the college to be need-blind in ten years, and the expansion of the student body and the continuing construction on campus have been done in effort to increase the student body size in order to grow the financial aid budget.

“It sounds like in the peer marketplace that we exist in, the only way to serve the…Lafayette population is to go need-blind,” Burwell said. “I don’t think we can continue to serve our mission without being need-blind and growth is integral to that mission.”

Burwell also noted that student government has been working to maintain the student experience during the expansion efforts by identifying student concerns and working with the administration to alleviate any issues that arose.

“Students think about Lafayette as a four year experience, administrators and board members and faculty members think about this as an institution that exists in perpetuity,” he said. “If things are cramped for ten years, that’s your entire experience.”

Burwell also noted that passing on the gavel to president Fraynette Familia ‘20 was a “bittersweet” experience.

“It’s sweet knowing that she is not going to drop the ball. She is so motivated and passionate and such an exceptional leader that I feel very safe passing this on to her.”