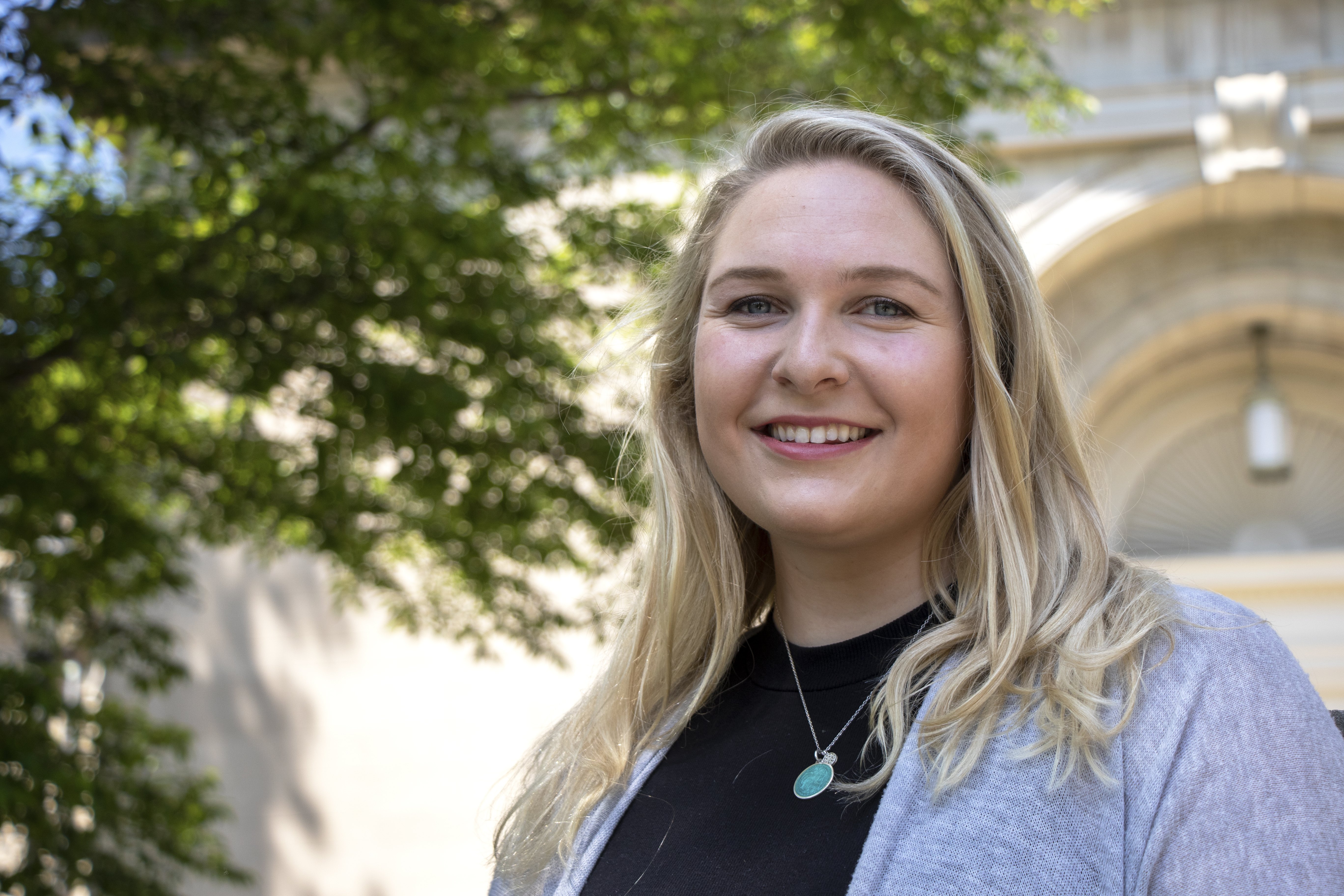 Reeve Lanigan ’19 spent much of her college career fighting for victims of gender violence. (Photo by Jess Futado ’19)

Reeve Lanigan ’19 grew up learning how to “be an advocate” for herself. Now, she will go on to graduate school to learn how to advocate for others. She has been inspired to take this career path through her involvement at Lafayette.

Lanigan is this year’s Pepper Prize winner, awarded annually to the senior who “most nearly represents the Lafayette ideal.”

During her time at Lafayette, Lanigan founded the peer education group Pards Against Sexual Assault (PASA), worked as a Writing Associate, did research as an Excel scholar and worked as a Pardner. She is also a member of the varsity swim team.

“I just tried to expand myself as much as I could,” she said. “If I hadn’t, I wouldn’t have been able to meet everybody I know. The people at Lafayette are really what has made it for me.”

Lanigan was raised by a single mother after her father died when she was 12. Because of this, and the financial trouble that accompanied her father’s death, Lanigan said that she started learning to speak up for herself very early on.

“It was…ingrained in me from a young age that I had to be an advocate for myself,” she said.

In high school, Lanigan said she was exposed to a lot of progressive ideas surrounding intersectionality, which gave her a “good head start” for college. She even started a club called Girls Learning and Making a Difference, which she said was “kind of like a feminism club.”

“I knew coming to college that Women’s and Gender studies was going to be the backbone of what I wanted to do,” she said. “That already put me on a path of wanting to be more involved.”

During her second semester at Lafayette, one of Lanigan’s friends was sexually assaulted.

“That really took a toll on me and my group of friends,” she said. “I…already knew I wanted to go into Women’s and Gender Studies, but I didn’t know how I wanted to apply it, but that made me start thinking about government and law and Title IX.”

Lanigan reached out to the Amy O’Neill, who was the Title IX coordinator at the time, in order to learn more about Title IX. At the time, Lanigan said she knew about the impact of the 1972 law on sports, but also “knew that there was more to it.”

“I met with her to get to know her, but we just immediately clicked,” Lanigan said.

Lanigan started interning in O’Neill’s office during her second semester, and continued into the summer. The following year, she became an official academic intern for the Title IX office.

During that time, Lanigan said she was exposed to many of the issues with the college’s policy, as well as to the resources that were available but were “tucked away and hidden” from students. She also said she began to develop a sense of how other institutions had more student involvement on issues of sexual misconduct.

“It felt weird to me that there were no student groups for that,” she said.

Soon after, Lanigan and one of her friends started PASA.

“It started with small informal events,” she said. “ We saw how many students cared about this, and we were shocked by how many survivors there were.”

During the summer of her junior year, Lanigan’s perspective on gender violence issues increased even further during her internship at a New Jersey non-profit that provided legal services to victims of domestic violence.

“It was startling to me because I had started to see my campus and I was very much in the bubble of Lafayette, seeing our policies, and I was like, ‘Okay, there’s this even bigger issue…that I want to learn more about and I want to address,” she said.

Lanigan was able to work at the firm through the Robert Beane ’58 Intern Scholar Program, which is awarded to students to help fund summer internships. While there, she worked doing intakes, collecting evidence and even going to police stations to get reports. This experience, she said, largely informed many of her later interests, including her senior thesis and her desire to improve the American justice system.

“I saw how arduous the legal system was for victims of domestic violence to literally just receive a restraining order,” she said.

The following summer, Lanigan returned to the law office as a part time paralegal. Lanigan was also working as an Excel scholar under government and law professor Bruce Murphy.

In addition to working as an Excel scholar and a paralegal, Lanigan was continuing a project which she had begun during the school year in an independent study called Social Justice Journalism, lead by English professor Kathleen Parrish. Here, she began to develop another of her interests: laws related to cyberbullying.

“I realized through reflections on the swim team and, also among my friends, how social media was the main form of communication and the source of a lot of drama…beyond drama turning into bullying on those platforms, that became so under-discussed,” Lanigan said.

For her research, Lanigan reached out to the family of Sarah Bramley ‘19, who committed suicide in 2016. Lanigan said that cyberbullying played a significant role in Bramley’s death.

“My first meeting with the Bramley’s I realized…you really get to know the person before anything can happen,” she said. “It ended up becoming…[that] I [needed] to get to know them as a family and hear their story.”

Lanigan also reached out to a local attorney who specializes in free speech issues to discuss the laws surrounding cyberbullying. This led to her working for him as well, continuing her research and also continuing to meet with the Bramley’s. Lanigan noted that she is in contact with the family to this day.

Much of her work over the summer and during the school year culminated in her senior thesis, entitled Domestic Firearm Violence and the Creation of Governmental Revictimization. She noted that this was a confluence of her studies in bullying, gender issues and the work she did with victims of domestic violence during her internship

“I saw how frequently firearms were used as a form of power and violence and control and manipulation [during my internship],” she said. “It wasn’t always directly physical injury, but it was used as a source of power over someone that you could use against them at any second. That was really jarring to me because I never expected that guns were so easily obtained and so easily abused.” She added that she asked herself “why no one was doing anything about it.”

“You would think a domestic abuser shouldn’t be allowed to have a gun, but they can in some states,” she added.

Next year, Lanigan will be doing a master’s program in criminal justice in Scotland through the St. Andrews Society scholarship program, which offers a one year fully paid post-graduate opportunity in a field of the recipient’s choosing.

“I’m excited to go abroad and learn more about how we can improve our own system, so that when I do go to law school I can take what I learned there,” she said.

“I aspire long-term to be a judge of some sorts,” she added. “That’s my long-term dream.”

Congratulations Reeve! It was a pleasure having you in my classes