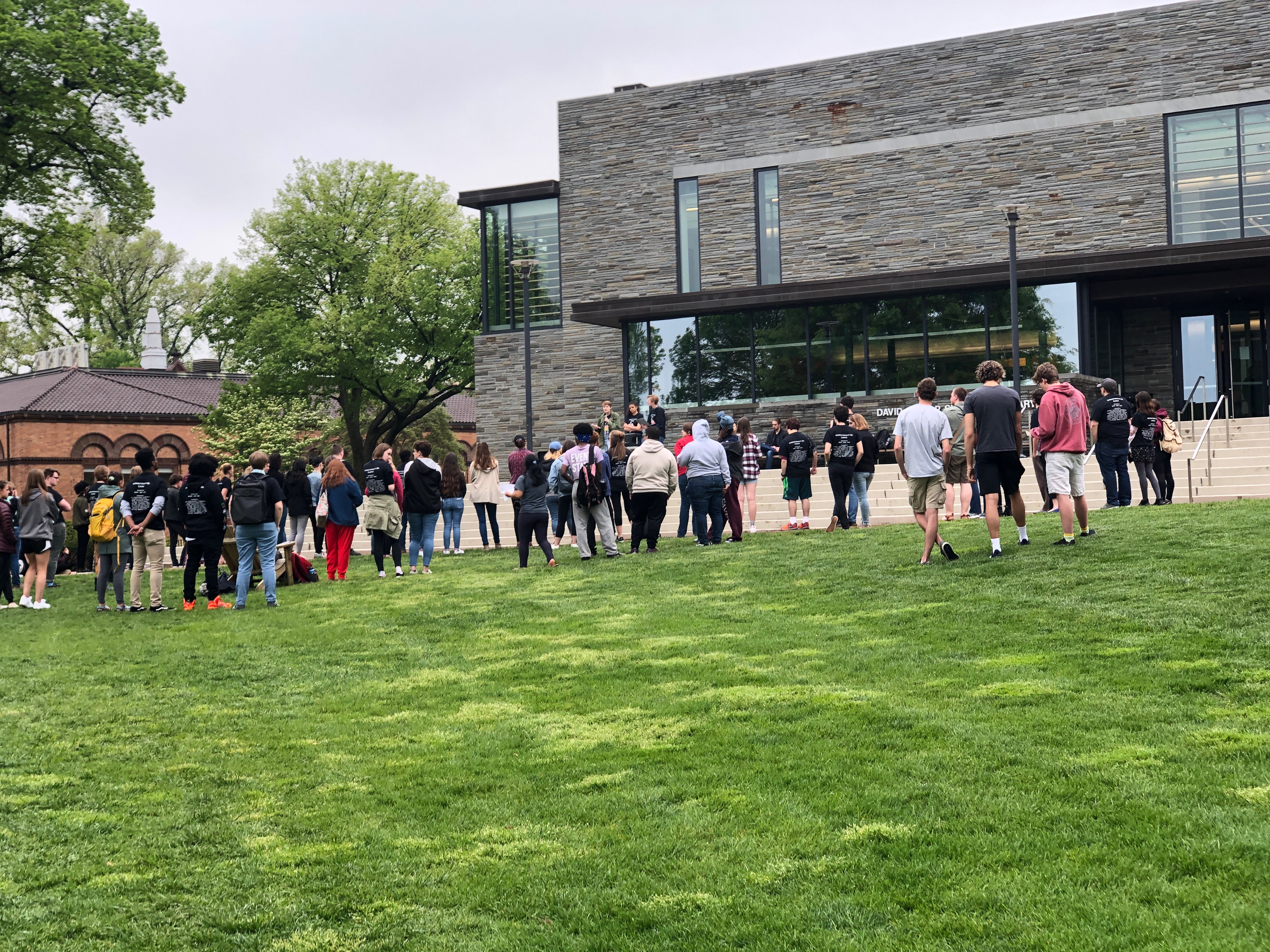 In connection to this year’s Equality Rally, activists from the LGBTQ+ community have written a letter voicing their concerns about the college to be delivered to the college’s administration.

“It is a time to celebrate the advancements of LGBTQ+ rights at Lafayette and the work of student and faculty activists, and simultaneously, a time to hold the administration accountable for the safety and comfort of marginalized students by demanding necessary change,” said president of Quest Emily Wright ’19.

The Equality Rally is an event that highlights the voices of LGBTQ+ students on campus, giving them a platform to speak and raise their concerns in the presence of one another, allies and the administration. This was the fourth biannual Equality Rally, and was held on the quad last Friday. Since the first rally in 2013, the event has been coupled with a letter written by members of LGBTQ+ groups on campus to the administration, voicing the concerns of LGBTQ+ students.

This year, for the first time, the rally and the letter was put together by three LGBTQ+ groups on campus: Pride Association for Leadership & Mentoring (PALM), Queer People of Color (QPOC) and Quest, Lafayette’s LGBTQIA+ and Ally education and social group.

Wright explained that the purpose of the equality rally was twofold. The letter that the groups have written to the administration explains that purpose and “outlines several concerns of queer students,” she said. The letter had not been finalized as of deadline for print Wednesday night.

Wright explained that through the rally and the letter and “by, building a platform…and amplifying queer voices, [LGBTQ+ groups] can spark necessary changes at Lafayette.”

While Wright acknowledged that Lafayette does attempt to attract and create a diverse student population, the school “often falls short on the follow-through.”

President Alison Byerly said she attended the rally, and that the event “always gives [her] insight into the experience of a lot of students.”

She said she makes an effort to the listen to the advice offered to the administration, and “one point two students made was that they…worry a bit that the college in communicating about our desire to be more diverse and inclusive works to hard at capturing what diversity there is on campus. A couple said specifically that they feel sometimes that photographers at campus events like to take pictures of students who are unconventional in some way as a way of representing diversity.”

She added that the students said they understood “the impulse behind” this kind of photography activity but “didn’t want to be seen as representing something.” She said she is going to pass on the message to Vice President of Public Relations Mark Eyerly and ask him to pass along to his staff that students enjoying an event “may or may not want to be typified in that way.”

The letter to the administration brings the notion of intersectionality to the forefront, emphasizing the fact that there are many people on campus who are marginalized and excluded in multiple ways.

“Our activism is meaningless if we do not address this,” Wright added. “It is important…to center the voices and concerns of people of color.”

The idea of intersectionality is highlighted by the fact that multiple activist groups on campus, each LGBTQ+ organizations with unique differences, worked on the rally and the letter together.

Wright and Rhonea Long ’20, the co-president of QPOC, both had positive comments on the groups’ dynamics and the effectiveness of the three organizations working together.

Long described working with PALM and Quest as “a breeze” and explained that she joined in on the letter-writing in the middle of the process, but that it was still an easy transition into the multiple group environment.

Wright echoed this sentiment, and said she was appreciative of the fact that collaborating with multiple groups “made the process of writing the letter more of a dialogue.”

Wright also expressed hopes that the joint effort will strengthen the letter and help it to address the needs of a broader range of LGBTQ+ people on campus.

While the successful Equality Rally and the collaboration on the letter reflect the strides that have been made in terms of LGBTQ+ acceptance at Lafayette, leaders of these organizations on campus emphasized that there is still a lot of work to be done.

Andrew Bachman ’21, a Quest board member, expressed a similar desire, stating that LGBTQ+ groups are gaining more traction on campus, as well as the importance of continuing to perpetuate “a sense of community on campus within marginalized groups.”

Wright noted this need for improvement as well. She said she hopes that this year’s letter will not be ignored and will serve as a tool for future activists at Lafayette to work towards the well-being of marginalized students on campus.

“Only feeble attempts have been made at implementing the changes…outlined [in the 2017 letter to the administration],” said Wright.

“We are calling for the administration to hear our concerns and demands and respond to them in meaningful, impactful ways, rather than just making empty gestures,” Wright added. “The Equality Rally isn’t just a celebration of LGBTQ+ rights on campus. It’s a time for [the administration] to listen to our concerns.”

Byerly noted that she heard the concern at the rally that the pace of change is slower than some students would like, and she said this serves as a reminder to the administration to move “as quickly as we can in the directions we’d like.”