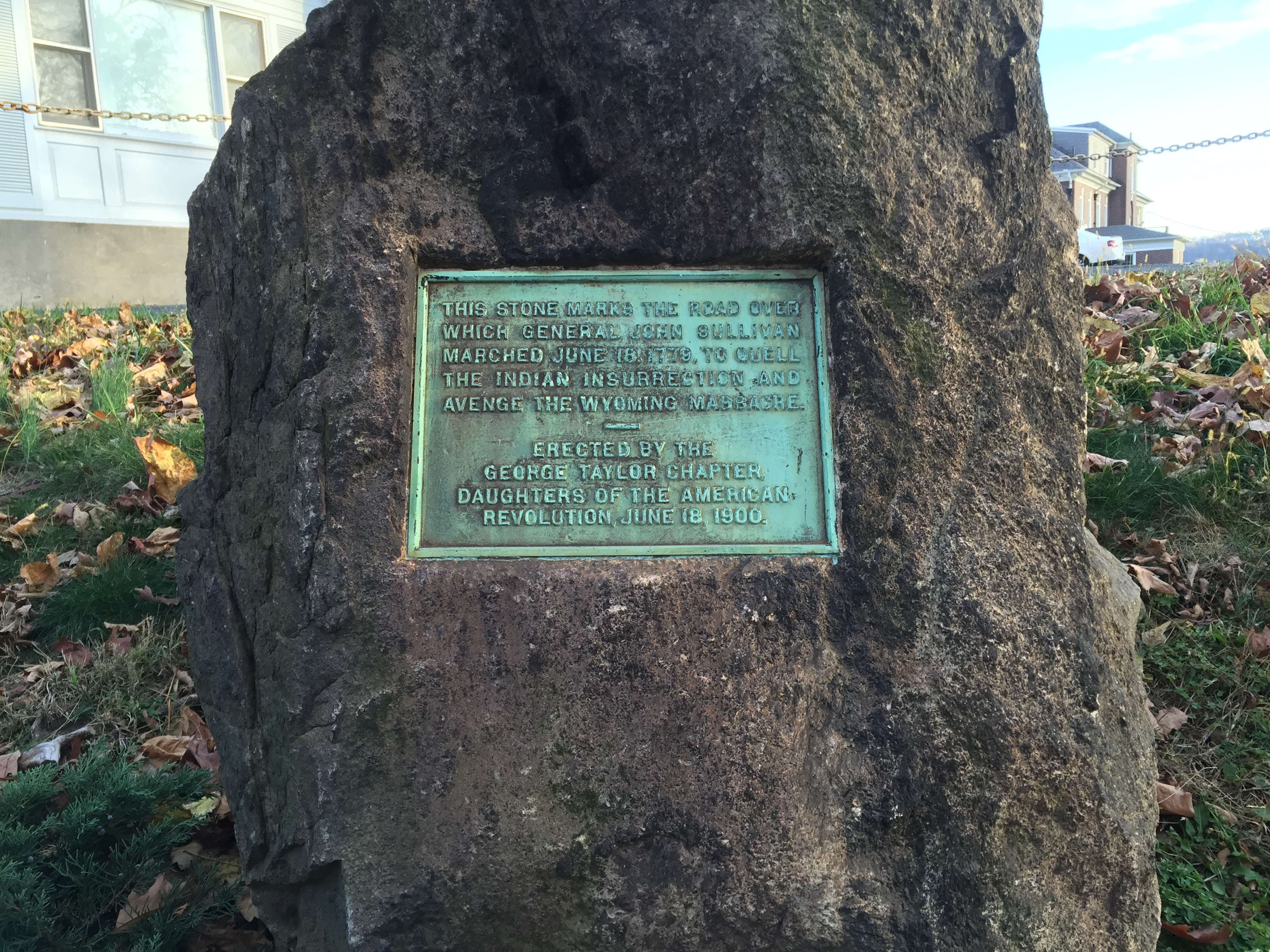 In a 1779 letter, George Washington tasked Major General John Sullivan with “the total destruction and devastation of [American Indian] settlements and the capture of as many prisoners of every age and sex as possible.” Two-hundred-and-forty years later, Lafayette’s campus is still home to a monument commemorating Sullivan’s bloody march, as well as a parking deck and a street that both bear his name.

This does not sit well with some students. About 20 from a class called Genocide and Reparations are planning on taking action after learning in class about the history of the monument, whose inscription reads, “This stone marks the road over which General John Sullivan marched June 18, 1779, to quell the Indian insurrection and avenge the Wyoming massacre.”

These students are planning to submit a letter to the administration urging them to address the monument in some way. The contents of it were undecided as of Wednesday night, and Sam Jeske ’21, a class member, said that they plan to submit it sometime next week. This planned letter comes after class discussions on how to best handle the problematic nature of the monument.

International affairs professor Angelika von Wahl, who teaches the course, wrote in an email that the class has been discussing a “number of different violations of human rights and their aftermath across the globe,” while dedicating some time to the monument.

After a visit to the monument with her students, she asked them to write alternative inscriptions and to consider possible ways to address the language in the existing one.

“We talked about the language that should be used, [such as] including the names of tribes, as kind of a memento to them instead of just saying ‘Indian,’ describing the act as genocidal and condemning it, maybe making some sort of apology and saying that it was wrong,” said Sam Jeske ‘21, a member of von Wahl’s class.

Jeske also noted that there was some debate as to what should be done with the monument, whether it should be taken down entirely, have the inscription replaced or preserve the current monument but add an additional sign nearby that condemns the actions of Sullivan on the trail.

After the students wrote their alternative inscriptions, von Wahl had the class vote on which inscription they felt to be the best replacement for, or supplement to, the existing plaque.

All three winners of the class vote emphasized in their inscriptions the need to remember the American Indian victims of the atrocities instead of painting them as an insurgent group that needed to be “quelled.” Some even listed the tribes involved, and spoke to the enduring residue of the injustices and the need to “challenge the oppression” still in existence.

Fayola Fair ‘19, one of the winners of the class vote, felt that the monument should be completely removed and replaced.

“My hope is that Lafayette would remove the current monument and install a new one to recognize the victims of this tragedy,” she wrote in an email. “Allowing the monument to continue to stand is disrespectful as it commemorates the destruction of indigenous communities, with no remorse whatsoever.”

Fair added that she felt the replacement should be nearer to the sidewalk on the Sullivan trail so that “members of our community can be aware of what has occurred.”

Dominique Cinicola ’20 was another winner of the vote for her alternative inscription. She advised that the school should “[keep] the original monument and then [create] an additional plaque that can comment on the original [so] we are able to address and apologize for the erasure of history, and bring the truth to light,” she wrote.

Jeske also made note of the difficulties involved in removing monuments that reflect on past historical narratives.

“Yes, it’s good that [if you get rid] of something that was commending…that act, but at the same time you’re erasing history…it’s important to know what people did badly,” he said. “If you destroy it…then everyone who sees [the new monument] from now on will think, ‘Oh, this is a good monument, there was never anything wrong with it.”

Overall, Jeske said there was a consensus in the class that something needed to be done about the monument as it stands currently. Members of the class are currently preparing a letter to the administration requesting that the school address the issue.

“I think that the school should recognize how problematic the plaque is and either remove it and replace it with something more accurate or make a sign to correct the existing inscription,” Meagan McGurl ‘19, another winner of the class vote, wrote in an email.

Jeske said the class hopes to get the letter to the administration by the middle of next week.

“At this point we don’t know very much about [the Sullivan monument], but I hope this will change in the future,” von Wahl wrote.