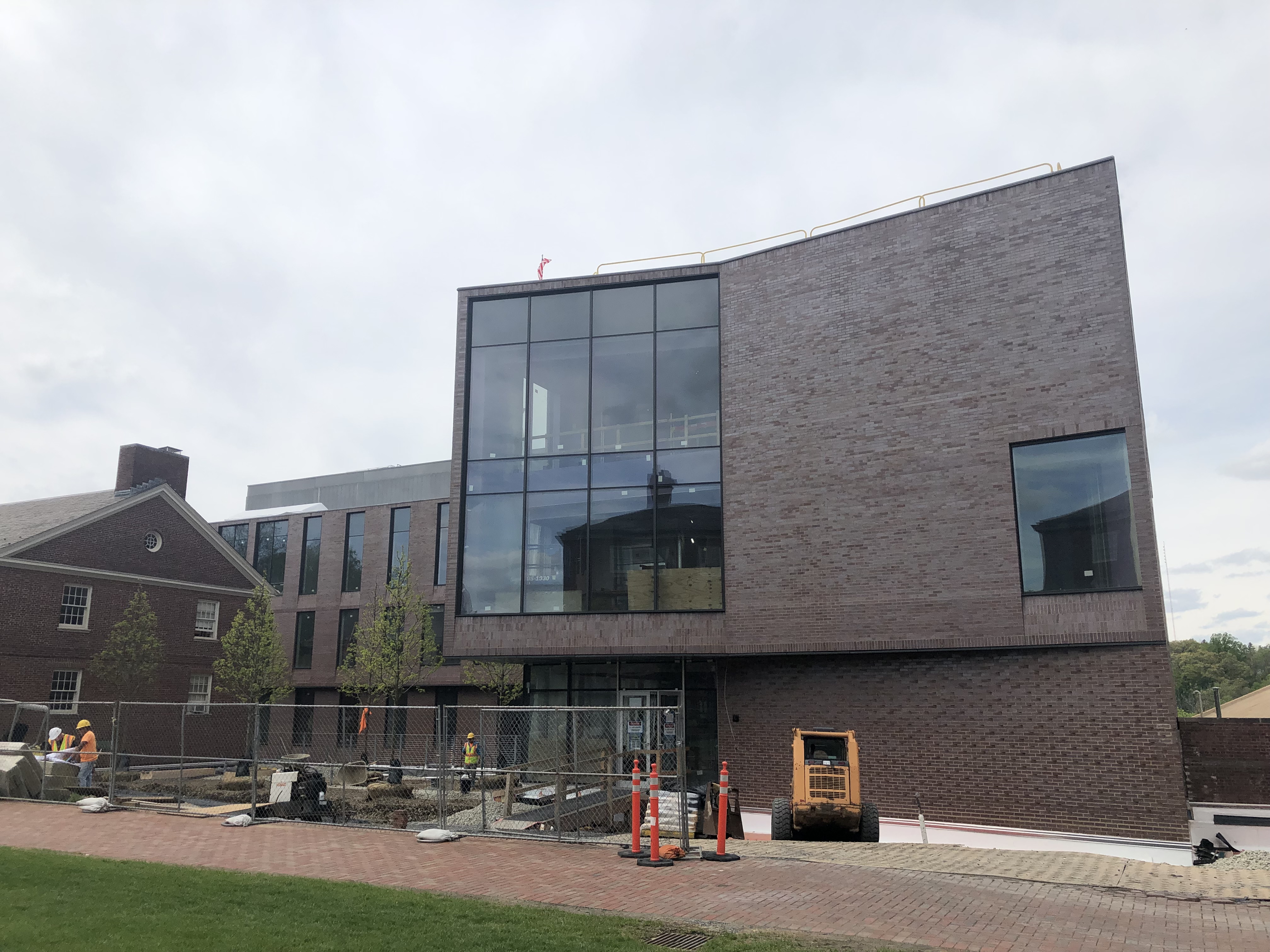 Faculty and students in academic departments like biology and computer science are looking forward to the move to Rockwell. (Photo by Morgan Sturm ’19)

The Rockwell Integrated Sciences Center, which is scheduled to open for the fall 2020 semester, will soon be the new home of some academic departments and centers. The construction on the sciences center is on schedule for the fall opening, according to Vice President of Finance and Administration Roger Demareski.

According to the center’s website, “[Rockwell] will house scholars teaching and conducting research in biology, computer science, environmental science, and neuroscience, as well as the Dyer Center for Innovation and Entrepreneurship, and the Daniel and Heidi Hanson ’91 Center for Inclusive STEM Education.”

With the fall opening approaching, faculty and students in these departments are preparing to have a new home base. Biology professor Michael Butler said his “hunch” is that Rockwell will be used by biology students “the way Acopian [Engineering Center] is used by engineering students.”

“I think it’ll be a lot easier for groups to get together, to meet here,” Butler said. “With the student population growing, additional space for meeting outside of class time will only be helpful.”

Butler said he is looking forward to improved lab spaces, teaching and office spaces, as well as the “natural light.”

“I currently have enough bench space for just one student to sit and work at a time, so being able to have all my independent study students have access to space to do work, that’s really appealing,” he said.

Aside from improved learning spaces, the biology department’s move to Rockwell also means new machinery and an animal care space that will allow students and faculty to better control things like light and temperature. The windows in Rockwell will also be “bird safe,” according to Butler.

Biology department head professor Laurie Caslake said the “big ticket items” for the department are a new Zeiss confocal microscope, which costs over $300,000, all new microscopes for the teaching labs, new environmental chambers and plant growth chambers, as well as some new refrigerators, freezers and smaller equipment.

Student Rachael Broder ’20 said she is looking forward to being in space that will have more windows and more study spaces.

“There are not many spaces in Kunkel [Hall] where you can sit down and study. We have the small sitting area near the lobby but the outlets don’t work there. I’m excited to see more communal study spaces in Rockwell that are technology friendly,” Broder said in an email.

Computer science is another academic department that will fully move into Rockwell once the building is completed. Although it is not directly related to engineering, the computer science department is currently located on the fifth floor of the Acopian Engineering Center.

Liew said he thinks the “biggest plus” is that Rockwell is designed to have spaces where students, faculty and others can meet or discuss with easy access to white boards and chairs.

“I think the whole thing is [about] fostering discussion and an easy exchange of ideas,” Liew said. He said another plus is that Rockwell is set up to teach “in a way that’s reflective of the modern way that teaching is being done.”

He said he hopes that the data visualization lab, which is planned but not yet acquired by the college, in the new computer science space will “drive” how faculty teach the new data science minor.

Liew also said he believes the new sciences center will strengthen the already existing collaboration between the computer science and biology departments. He said he has been working with biology professor Robert Kurt for “about four or five years.” Liew said the data visualization would help them in their work.

The Dyer Center for Innovation and Entrepreneurship and the Daniel and Heidi Hanson ’91 Center for Inclusive STEM Education will also be located in the Rockwell Integrated Sciences Center. According to an article from the Lafayette Magazine, “The Hanson Center will serve as a home for research and programming and address the national need to recruit more women and underrepresented minorities to the sciences.”

The Dyer Center, which is currently located on the first floor of Hogg Hall, will move into a bigger and more “open” space in Rockwell, according to Director of Innovation Entrepreneurship Yusuf Dahl.

“Occasionally we’ve done workshops [in Hogg Hall], but they have to be very small and within the conference room, so to have a space that’s going to enable our lectures, workshops and networking events, I think it will make students more aware of the center,” Dahl said.

Jolene Cardassi, Administrative Coordinator for the Dyer Center, said the space will consist of tables for four or eight people with whiteboards, cushion chairs and couches throughout. Dahl said that aside from the “state of the art” lab equipment and “maker space” the center will have, they are also looking into either a ping pong table, foosball table or basketball court for the center.

“We have students from across campus and across disciplines who have an interest in [the Dyer Center], so we want to be the space that they go to, even if that’s just if they’re checking their email or if they have a break between classes,” Dahl said.