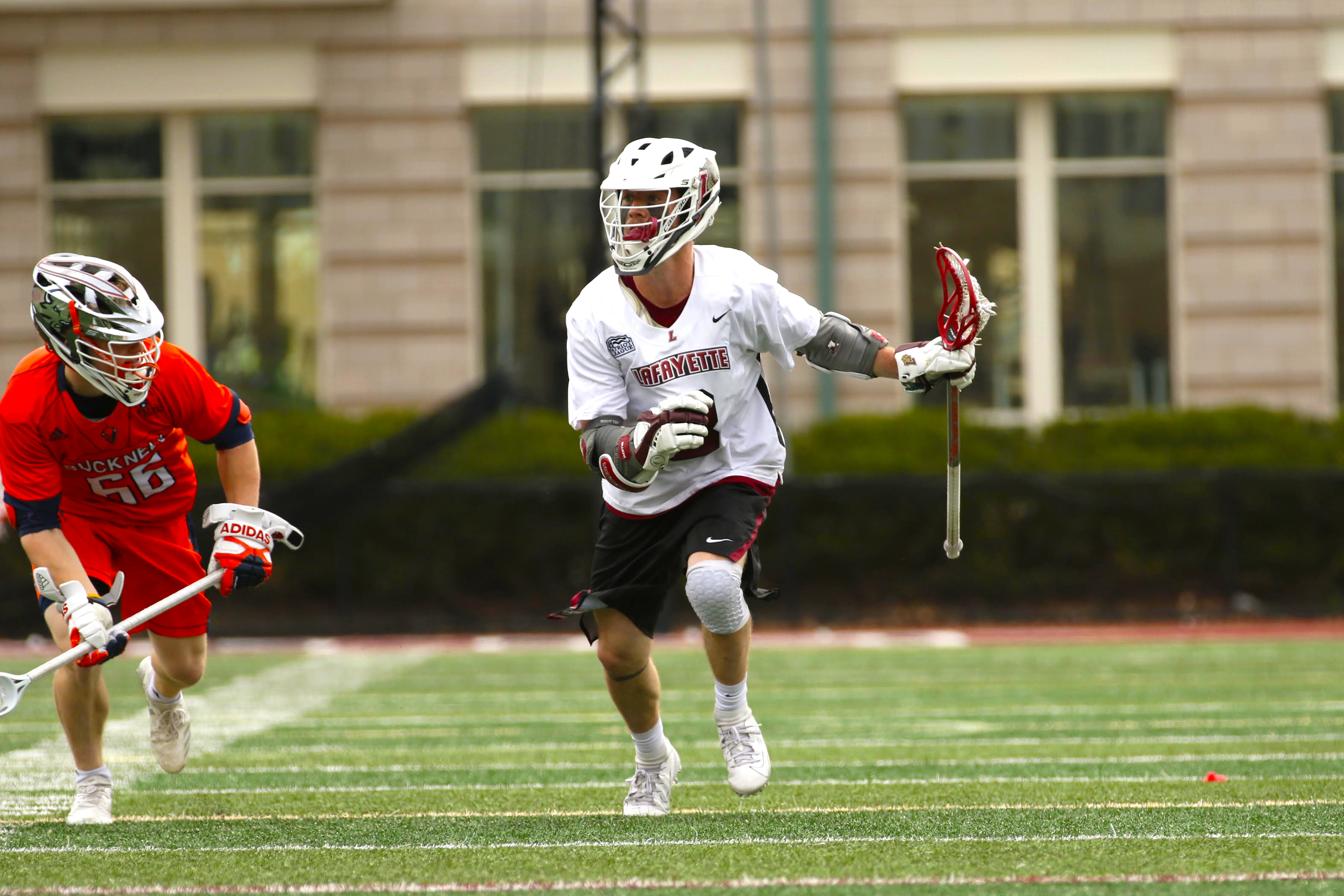 Men’s and women’s lacrosse records combined for one win this season in the highly-ranked Patriot League. (Photo courtesy of Athletic Communications)

The Lafayette women’s and men’s lacrosse teams closed out their seasons with losses to Colgate and nationally ranked Loyola, respectively, a week ago. The men’s team lost 15-4 despite holding the Tewaaraton finalist, for most outstanding lacrosse player, Patrick Spencer to zero goals and three assists. The women’s team lost their senior day game 13-12, despite a late comeback attempt.

For the men, midfielders senior Connar Dehnert and junior Robbie Garavente led the team with two goals each. Freshman midfielder Cole Dutton contributed two assists, and sophomore goalie Jake Floyd-Jones made his third start of the season. Defensively, the team was able to stifle a high-powered Greyhound attack in the first half, giving up only two goals in the first quarter, and four in the second.

After the break, the Leopards traded goals with Loyola before the Greyhounds took over with seven straight scores. The Leopards trailed 11-3 going into the fourth quarter, and were only able to score once more before the end of the game. With the loss to Loyola, another challenging men’s lacrosse season comes to a close in head coach Pat Meyers’ first season.

Despite going 4-11 this spring, Meyers’ first season represented positive first steps in rebuilding the program, including a one-win improvement over the 2018 season. The team will graduate 10 seniors, including two of the top three point scorers in Dehnert and senior attacker Conor Walters.

“We did not define success this season as how many wins we had. We had a ton of ‘little victories’ and we are very proud of that,” Dutton said.

“These little victories are what set the groundwork for the future of Lafayette lacrosse,” he added. “Paired with the hard work and dedication from our seniors this season, the future is very bright for the team.”

Dutton, who was tied for the lead in points among the team with 31, hopes to continue to develop his offensive game and overall skillset.

“One of the biggest improvements I am looking to make this season is my weak hand,” he said. “I was a very one-handed player last season and many teams caught on to that which made it harder for me to help the offense. I look forward to taking full advantage of this offseason and coming back in the fall ready for next season.”

Walters, who was also tied for the lead in points on the team, was named to his second straight Academic All-Patriot League Team on Wednesday.

The women’s team was led by sophomore attacker Colleen Bannon’s and senior midfielder Emma Novick’s three goals each. A closely contested game throughout the first half resulted in a tie going into the break, with both teams scoring six times.

Colgate and Lafayette continued to trade goals until about halfway through the second half, when Colgate went on a quick three-goal run in as many minutes. The Leopards scored back-to-back goals off of freshman midfielder Caroline Curnal’s won draw and quick shot, and Bannon’s third goal of the game, assisted by Curnal.

“It felt really awesome being able to help our team out as much as possible,” said Bannon. “My teammates really put me in the position to have those goals, especially the first and last, since they were off great feeds from [junior midfielder] Bella Alampi and Caroline Curnal.”

The women close their season with a 5-12 record, going 1-8 in the Patriot League. The team also loses eight seniors to graduation including both leading goal scorers, attacker Jane Kirby and Novick, who recorded 44 and 41 goals, respectively. The men end the season with a 4-11 record and an 0-8 mark in the conference.