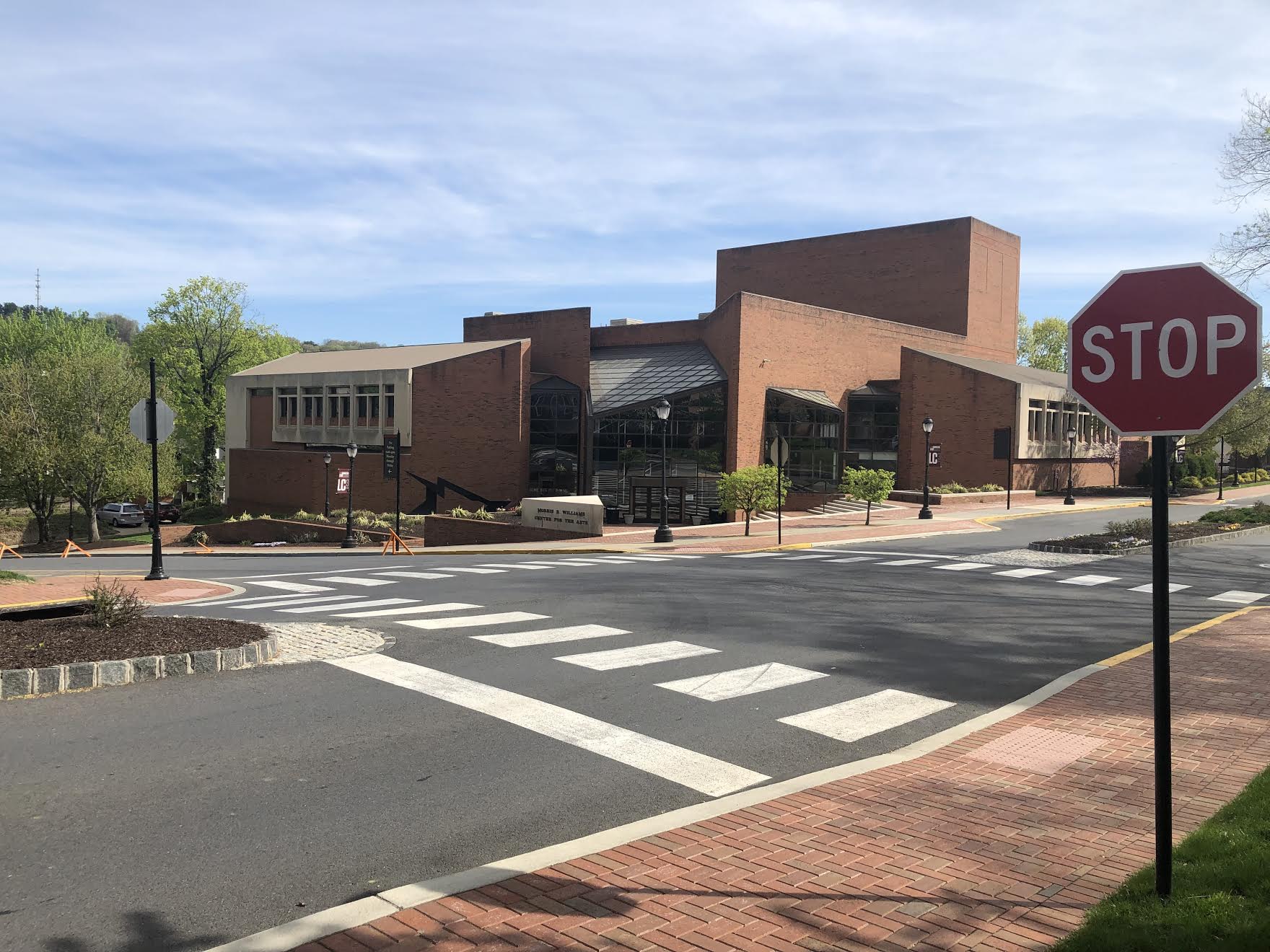 Nia Burrell ’19 had near miss with a car while walking across the street at this intersection of Hamilton and High. (Photo by Morgan Sturm ’19)

As Lafayette gains $1 million from a state grant to improve pedestrian safety on and around campus, some students say they have concerns about the safety of crossing multiple intersections on the hill. These students cite a lack of regard from speedy drivers for crossing pedestrians as one of the main issues that face those trying to cross the streets.

“As much as people joke about [getting hit by a car], there is a level of seriousness that this actually can happen, because it [almost] happened to me…three times,” said Julie Samuels ‘19.

Last Thursday, Samuels was crossing the intersection between McCartney Street and High Street when two drivers almost hit her. One driver was going straight through the intersection, while the other was turning. Neither was paying attention to Samuels or the posted stop signs, she said.

In another instance last week, Samuels was walking past the one-way driveway between Gates Hall and Bailey Health Center when a car in the driveway went in reverse and almost hit Samuels while backing out into the street, forcing her to jump out of the way.

“It all happened in the span of three days, and it was a lot,” Samuels said.

Nia Burrell ‘19 also described having a close call when crossing a street.

During the fall semester, she was crossing the intersection between Hamilton Street and High Street in front of Gilbert’s Cafe when a car neglected to stop at the three-way stop sign.

The car turned almost directly into Burrell, who said she was “terrified.”

Burrell contacted Public Safety, who opened an investigation into the incident. According to her, they were able to find the driver based on her description of the car and its passengers, as well as what she remembered from the license plate.

“It ended up being students [in the car]. I never got their names or actually met them directly. They gave me the option to, so that they could apologize to me, but I just didn’t think it was worth it,” Burrell said.

Kristen Ingraham ’19 has never had a near miss or close call when crossing the street, but always exercises extra caution on College Hill.

“I always look left and right like three times before I cross because I feel like College Hill has a lot of blind spots [at intersections] and people drive fast for a residential area,” Ingraham said.

There have been incidents when she hasn’t been sure whether or not a driver will stop for her when she’s crossing, she added.

“Students live off campus, they cross the street, and it’s just been such a hazard. And I’ve noticed it a lot more recently, that a lot of people are disregarding stop signs, speed limits and crosswalks,” Samuels said.

“I have noticed that people don’t stop for you like they should,” Burrell added.

In addition to these close calls for Burrell and Samuels, College Hill has seen at least two car accidents on the turn from College Avenue onto Cattell Street in the last six months, with one car flipping over in front of Feather House in December.

The college’s downtown campus has also seen some trouble arise with pedestrian safety. In March 2017, Noah Decker ’19 was hit while crossing the street by a truck turning onto Bushkill Drive from College Avenue.

While he sustained only minor injuries, the incident was investigated by the Easton Police Department at the time.

In regards to on-campus safety, Sam Jeske ’21 suggested that the college add a crosswalk on South College Drive.

Samuels suggested that the college add more signs, notably for driveways such as the one-way near Gates Hall and areas where there a lot of pedestrians such as intersections near Bailey Health Center and the Acopian Engineering Center.

“People ram right through [the intersections], and it’s terrifying. I drive on campus too, so I know that when I’m behind the wheel and I see people crossing, [I’m] like, ‘I’m not taking any chances’, but when I’m crossing, I just see people going 50 miles an hour and [I think], ‘Am I about to get hit?’” Samuels said.

Burrell recalled that the street in front of her house, the intersection of West Campus Lane and Sullivan Drive, doesn’t have a crosswalk, which can cause difficulty.

“I definitely think that the school could add a few more crosswalks in certain places,” Burrell said.

However, the main issue threatening pedestrian safety, according to some of these students, is the carelessness of drivers on campus.

“I watched somebody roll right through a stop sign last night,” Samuels said.