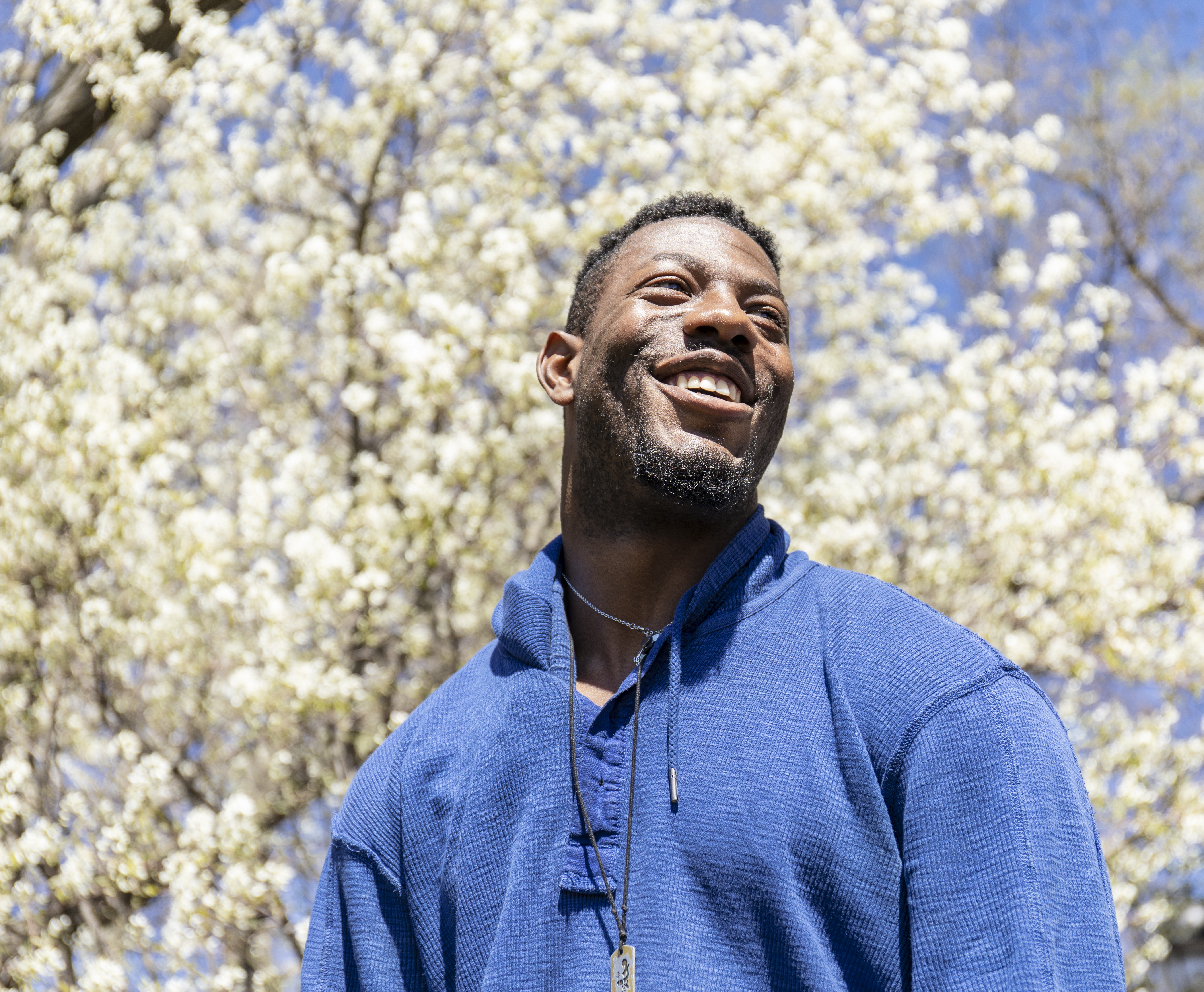 Kevin Hutchinson ’20, also known as Poetik Kindle, said that his family has influenced his musical journey. (Photo by Elle Cox ’21)

“Music is the medicine that replaces all other medicines,” said Kevin Hutchinson ’20, alias Poetik Kindle.

Sitting calmly and coolly in a laid-back chair, Hutchinson relayed his love for music and his connection to the world.

For Hutchinson, listening to music is much more than popping in ear buds and bobbing your head to the beat. Music is a form of creative therapy—it is a way to transform words and fulfill connections.

Raised in Saint Mary, Ga., Hutchinson grew up among changes and unfamiliar experiences. Life was seemingly unpredictable, as he moved from his family home to Saint Mary. He recalled the difficult choice moving was for his family, yet support and love within the family inspired him.

“My father is my best friend,” he said.

These experiences and the help of his father led him to craft the identity of Poetik Kindle, his musical alias. As a child, Hutchinson was fascinated by the emotional expression he had when playing football. As he grew older and entered college, his identity as Poetik grew stronger, driving him closer to music as he continued his football career at Lafayette.

The current musical atmosphere today does not align with his personal value, he said.

“Music is consuming more than producing.”

Hutchinson added he wants the rap genre to move away from “mumble rap,” and believes his connections with his friends during freestyle rap is when he takes a glimpse into the future.

His friends, father and teammates are always with him and on his mind, he explained, which encourages him to continue to write poetry that he transforms into rap.

As he let words flow during an effortless freestyle, he preached the importance of his message going to “his people,” which he referred to as his “conscious” listeners—those who are not only self-aware but socially—and those he sends his heart out to on a daily basis.

If given the opportunity, he said he would fill a room of his “conscious” listeners and ask them to create art as they wish, with no boundaries or expectations.

Hutchinson’s message is that he refuses to become something he did not intend to be, and focuses on living his life humbly and artistically. He mentioned that he has begun to wear nicer clothing, which he did not have the luxury to before—despite this new appearance, he expressed that no matter what he is still Poetik and he is still Kevin.

As Hutchinson continues crafting his label “Red Planet,” he said he still loves football because of his Lafayette team. He never wants those “bonds to end early” as he will be graduating soon.

His father also remains his encouraging force. As he reflected on his life, Hutchinson free-styled in an interview with The Lafayette, dedicating the following verses to his family:

“It’s gonna be okay, know that you did pray/Last year I lost my way, but now I’m on this way.” He ended the rap-style song with two simple words: “It’s okay.”

As Hutchinson describes the relationship between Poetik Kindle and Kevin, he explained that they are one. Although he said that Poetik, the “positive” musician, is who he is becoming “mentally,” he still wants to be referred to as Kevin, because Kevin is still very much apart of who he is.

His life experiences crafted this identity that he has become, and continues to shape who he always has been, he said.

Poetik Kindle will be rapping tonight at 634 Parsons St., 7:30 p.m., along with the different featured artists included on his debut album.