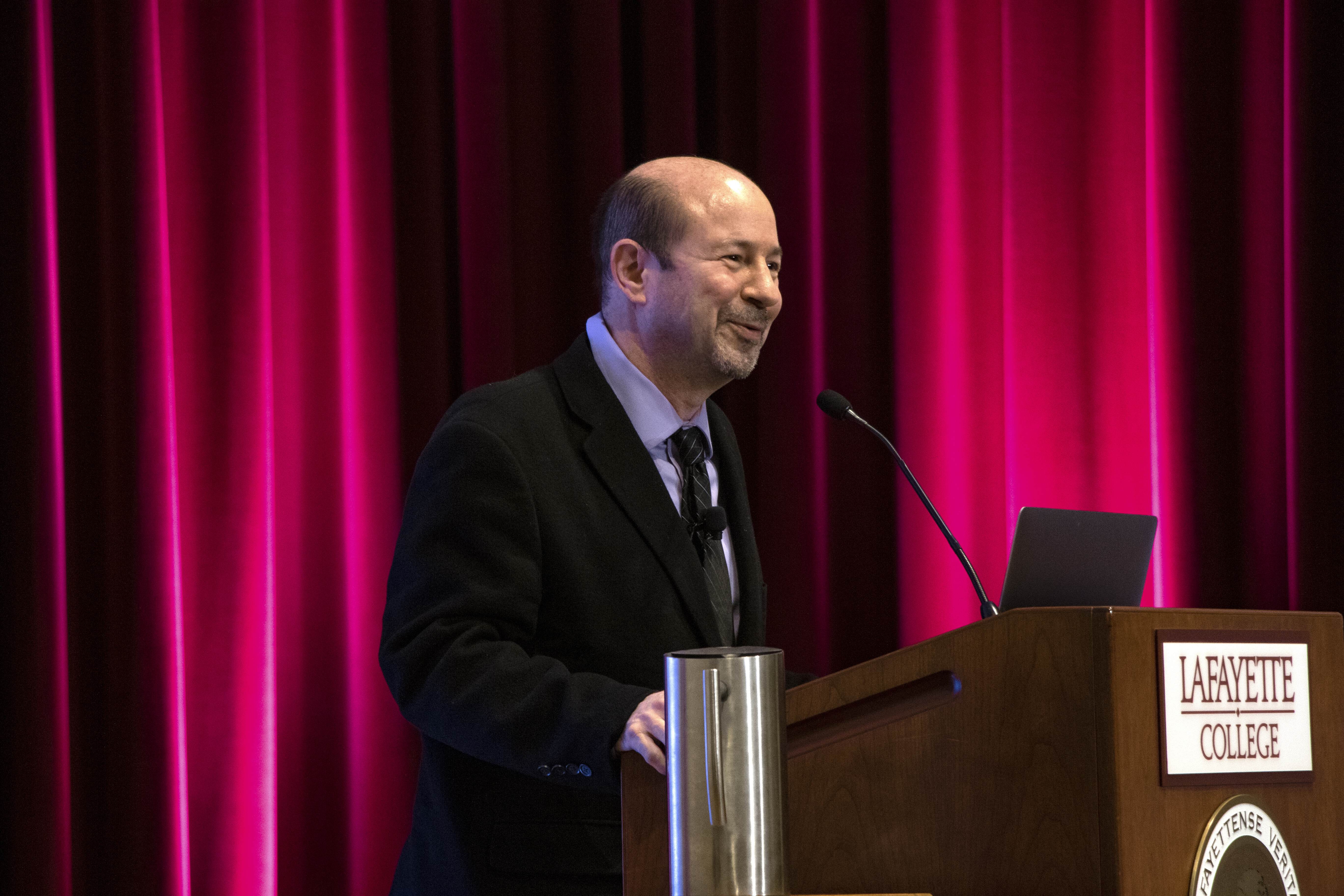 Michael Mann spoke Tuesday night about the importance of public engagement and action with the climate crisis. (Photo by Jess Furtado ’19)

“What is the greatest threat the military now tells us we face in the years ahead?” asked Dr. Michael Mann, professor of atmospheric science at Penn State University and director of the Penn State Earth System Science Center last Tuesday. “It’s climate change.”

Mann was invited to speak at the college as the Jones Lecturer. He spoke on the looming threat of climate change and the need for public engagement with climate action, especially at institutions of higher education.

“I think college campuses are going to have to play a vital role in the social movement that is ultimately required to really tackle this problem,” Mann said.

As for his own story, Mann discussed how he gained renown in the public sphere.

Mann said he was thrust into the spotlight after publishing the famous “hockey stick graph,” named for its resemblance of a hockey stick. This graph illustrates the global mean temperature and a sudden rapid warming in the 20th century.

“[The hockey stick graph] is 20 years old, but we have been debating this still for 20 years if climate change is real. I found myself at the center of that fractious debate because of this iconic graph,” said Mann.

Mann said that after the release of the graph, he found himself scrutinized by the editorial pages of the Wall Street Journal and by Fox News. Moreover, he was subject to congressional inquisitions, a hostile senate hearing, attempts at congressional subpoenas to demand personal emails, criminal theft of emails and efforts at intimidation, including threats against his life and thinly veiled threats against his family.

“They have tried every means of intimidation and threat and efforts to discredit me,” said Mann. “But really, to some extent, it’s simply emboldened in me if they’re trying that hard to get me to shut up there must be something important that I am saying.”

“Perhaps there is some irony in the fact that if they had left me alone, I probably would have stayed in the lab doing what I was doing, doing what I loved doing, which was science,” Mann said, adding that the scrutiny drew him out into the “public sphere.”

Mann said that, although he did not expect this career shift, he embraced the opportunity to inform the public of what he feels is the greatest challenge we face as a civilization.

He began his lecture by explaining the scientific case behind climate change, stating that it is a “rather straight forward issue.”

“You may have heard this recent report that we only have 12 years to limit climate change below dangerous levels…It’s essentially true,” Mann said. “If you do the math, it turns out we have to reduce our carbon emissions by about five percent a year for the next 12 years to keep warming below that level.”

Mann mentioned in an interview that he believes it is possible to achieve this.

“If I really thought we didn’t have a chance to curb this problem in time, it would be difficult for me to tell you otherwise. I have an optimism I think that comes from not out of…foolishness, but comes out of an awareness of what we have accomplished in the past,” he said.

In his lecture, Mann stressed the importance of taking action and the limited time left to do so. He explained that although individual actions are important to mitigating climate change, in order to see a decrease in global carbon emissions, political action is needed.

Mann explained that there is starting to be a shift away on the international level from fossil fuels and coal and towards renewable energy.

He explained that there is a political tipping point occurring, with more policy slowly being developed to fight climate change on a national level. He discussed the role college campuses can play in pushing for this kind of large-scale change.

Mann recounted a story form when he was a student at University of California Berkeley, discussing how the anti-apartheid movement began at his school.

“The students forced the university to divest of holdings in the South African government. That lead to a national divestment movement which ultimately forced the hand of the South African government and ended apartheid,” Mann said. “That started with college campuses. The free speech movement, the civil movement, all of these great social movements have really begun to a large extent at college campuses.”