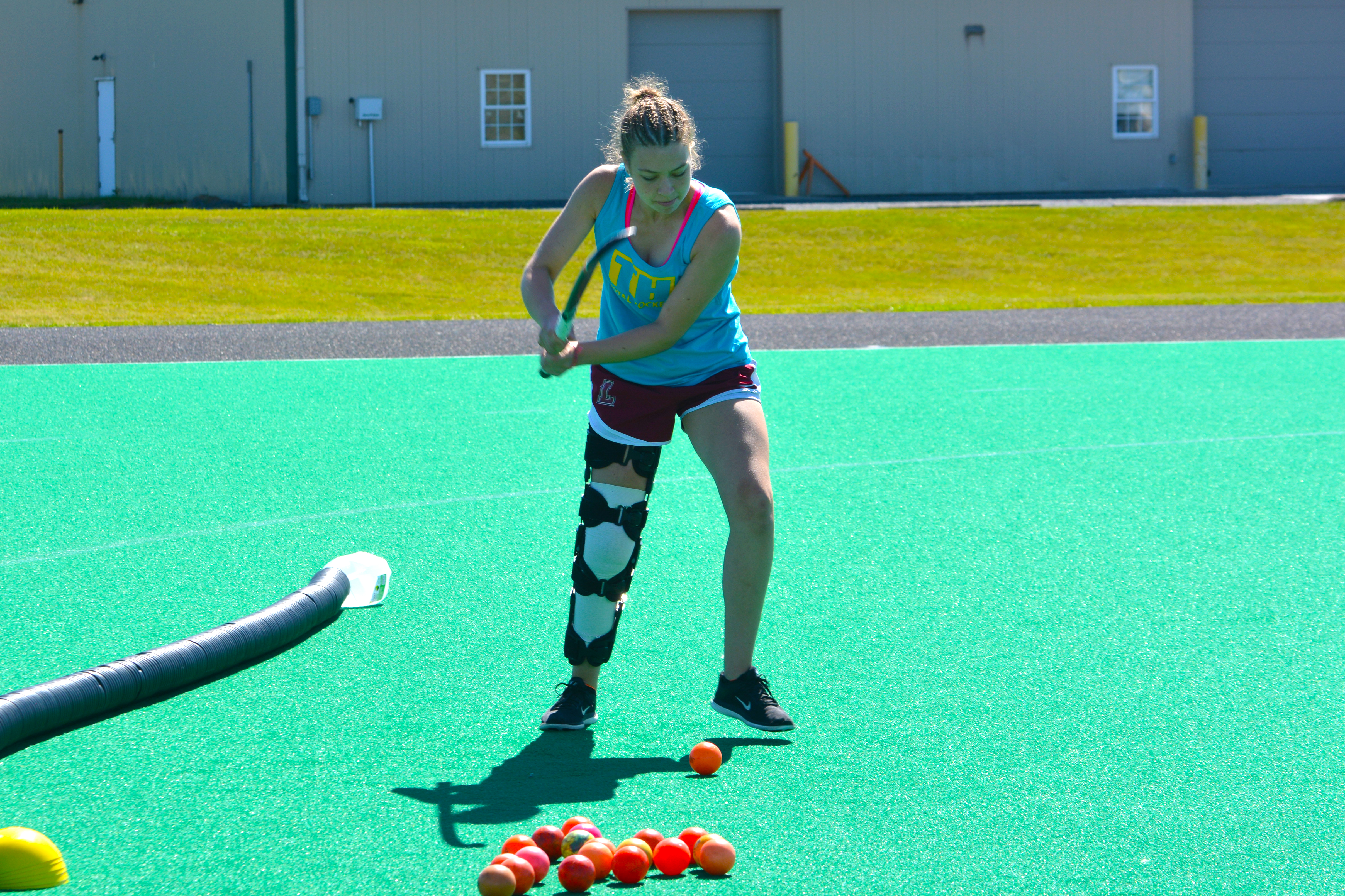 Sophomore Sophie Carr said that her ACL injury has allowed her to find a new leadership style and become a more ‘vocal’ leader. (Photo courtesy of Bill Rappolt)

Sophomore field hockey forward Sophie Carr suffered a setback last spring when she tore her ACL. A year later, not only has she nearly fully recovered from the serious injury, but the NCAA has recognized her as a leader in collegiate athletics.

Moreover, she is aiming to help others recovering from injuries at Lafayette with a support group, which she hopes to be up and running by the fall.

Carr applied and was selected to be the female representative from the Patriot League to attend the annual NCAA Leadership Forum in Orlando, Fla., which she attended last weekend. While in Florida, she met with fellow athletes, coaches, and athletic administrators, attended extensive leadership training, and participated in an open dialogue about the student-athlete experience across the country.

Carr highlighted the leadership training as a particularly meaningful takeaway from the forum, as it helped her understand her values and core strengths, two essential pieces to recovering from injury.

Recently returning from the forum, Carr said she hopes to instill the leadership skills she learned with the field hockey team to create a more inclusive and welcoming space for the players to speak freely about their experiences with one another.

In addition to leadership development, Carr noted the importance of an “open atmosphere” outside of team environments as a campus-wide matter. She mentioned the student athlete advisory committee (SAAC) as a key piece to getting athletes mobilized towards the common goal of improving their college experience.

“We’re really trying to get [SAAC] amped up a little bit more, because that’s where all the legislation comes for student-athletes,” she said.

Outside of the challenges of returning from a serious injury, Carr said that adapting a positive mindset was an essential part of recovery, and that the most important thing is the response in the face of adversity. She struggled initially to stay optimistic, she said, but her interactions with other athletes who’ve had serious injuries helped her adopt a better mindset.

“Going through the whole [recovery] process, I didn’t realize how much the mental piece played into it,” she said. “I’ve realized how important it is to deal with the mental and put in the time for your mental recovery as well as your physical recovery.”

Carr pointed out how the mental, physical, and social effects of serious injuries take a toll, leading to decreased mental health, loss of certain social settings and having your identity stripped from you.

“You’re taken away from something that you’ve always done and love to do,” she said. “That takes away your identity, you don’t feel confident, and it leads to different anxieties.”

This understanding of these challenges was one of the driving forces behind Carr trying to create a support group on campus for students and athletes alike. She hopes the group will be up and running in time by first-year orientation this fall, in order to best incorporate the program for the new students.

“We want to make sure that coming in for both student-athletes and non-athletes, making sure they know the resources available on campus,” she said. “A lot of people that have been through [serious injuries] really want to get involved in it, and are so passionate about it so that’s awesome to see.”

Carr said she has met with fellow athletes and students around campus who have recently suffered injuries and are adjusting to life during the recovery period.

“I’ve been meeting people that are just getting into their injuries now and they’re in the exact space that I remember being in a year ago,” she said. “You never really can hear it properly unless you’re hearing it from someone that’s really been through it before.”

Carr said that a “buddy-peer” system is in the works for the support group, wherein injured students could get help from another, whether it be through rides to the pharmacy, helping out in the dining halls or having someone around to spend weekend nights with.

“Especially as athletes you’re meant to be tough, so cracking is not expected,” Carr said. She added she hopes to remove this stigma from student-athletes and make people understand that injuries are not something “you just get over.”

Despite the circumstances, Carr has been able to find a silver lining from her injury: finding a different leadership style, being a more vocal leader on the field hockey team and “appreciating every single thing.”

“I fell in love with getting to coach a bit more on the sideline,” she said. “[Not playing] is hard to adjust to but once you do embrace it, it’s an incredible aspect of it.”

Carr gave a Tedx talk on campus in early April about “falling forward” and finding a positive from every situation. It is a mantra that she has continued to use as she gradually works her way back to full strength.

“Your outlook needs to be forward-looking, you can’t get stuck in the moment,” she said. “Understanding how things just change and being open to that. I’m excited for my next change.”