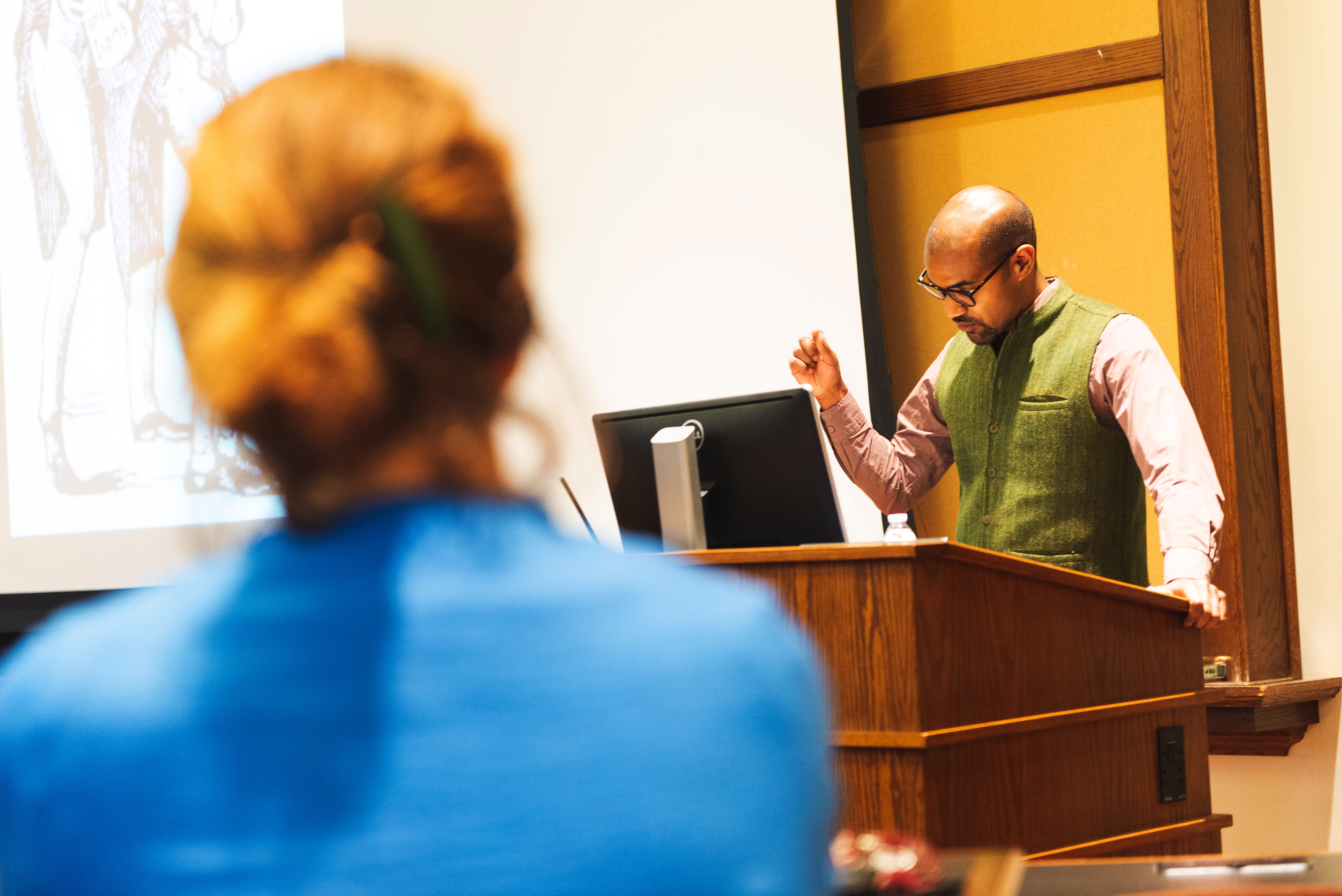 Kris Manjapra is the author of the book ‘Black Ghosts of Empire: the Long Death of Slavery,’ which will be published in 2021. (Photo by Brandon Marin ’22)

Tufts professor of history Kris Manjapra delivered his lecture “Black Ghosts of Empire” to a packed audience in Kirby Hall Monday night. The talk, which focused on the slave trade in the 1800s, was the Robert ‘69 and Margaret Pastor Lecture in International Affairs.

Manjapra received his doctorate from Harvard University in 2007. His work focuses on colonialism, diaspora and race. Monday’s lecture was a preview of his new work, “Colonialism and Global Perspective.”

Throughout the lecture, Manjapra used images to highlight aspects of his speech and help the audience understand the lecture. He showed the audience a tweet from the United Kingdom Government’s economic and finance ministry, which stated “millions of you helped end the slave trade through your taxes.”

He went on to explain how some parts of the world, such as Saint-Domingue, had an incredibly high slave population, while others had a very low percent, such as Continental Spanish America.

Manjapra also touched on what he considered to be some little-known facts about the slave trade.

“People still respond with shock and disbelief when they learn, for example, that slaves were held in New Jersey all the way up until the 1850s,” Manjapra explained. “Or that the last of the slave trading ships left the Boston ports in the 1850s.”

“[Manjapra] is a renowned scholar of transnational history and has published some well-known works that I knew,” von Wahl wrote in an email. “This year it was also part of the ongoing celebration of the 60th anniversary of the International Affairs program.”

Von Wahl noted that both faculty and students expressed excitement over the event.

“The presentation was an example of erudite and masterly research into slavery, an under-researched and thorny topic of transnational history,” von Wahl wrote. “We received enthusiastic responses from faculty and students, so that makes organizing the lecture definitely worthwhile.”

“Professor Manjapra’s talk about slavery reparations and Britain’s long history with these payments was very thought provoking,” she said. “I was most moved by the discussion on how contemporary this topic is, as many institutions today have deep ties to reparations such as financial institutions and the insurance industry.”

Kris Manjapra’s new work “Black Ghosts of Empire: the Long Death of Slavery,” published by Penguin and Scribner, will be available in 2021.

View all posts by Aidan Trevisan →