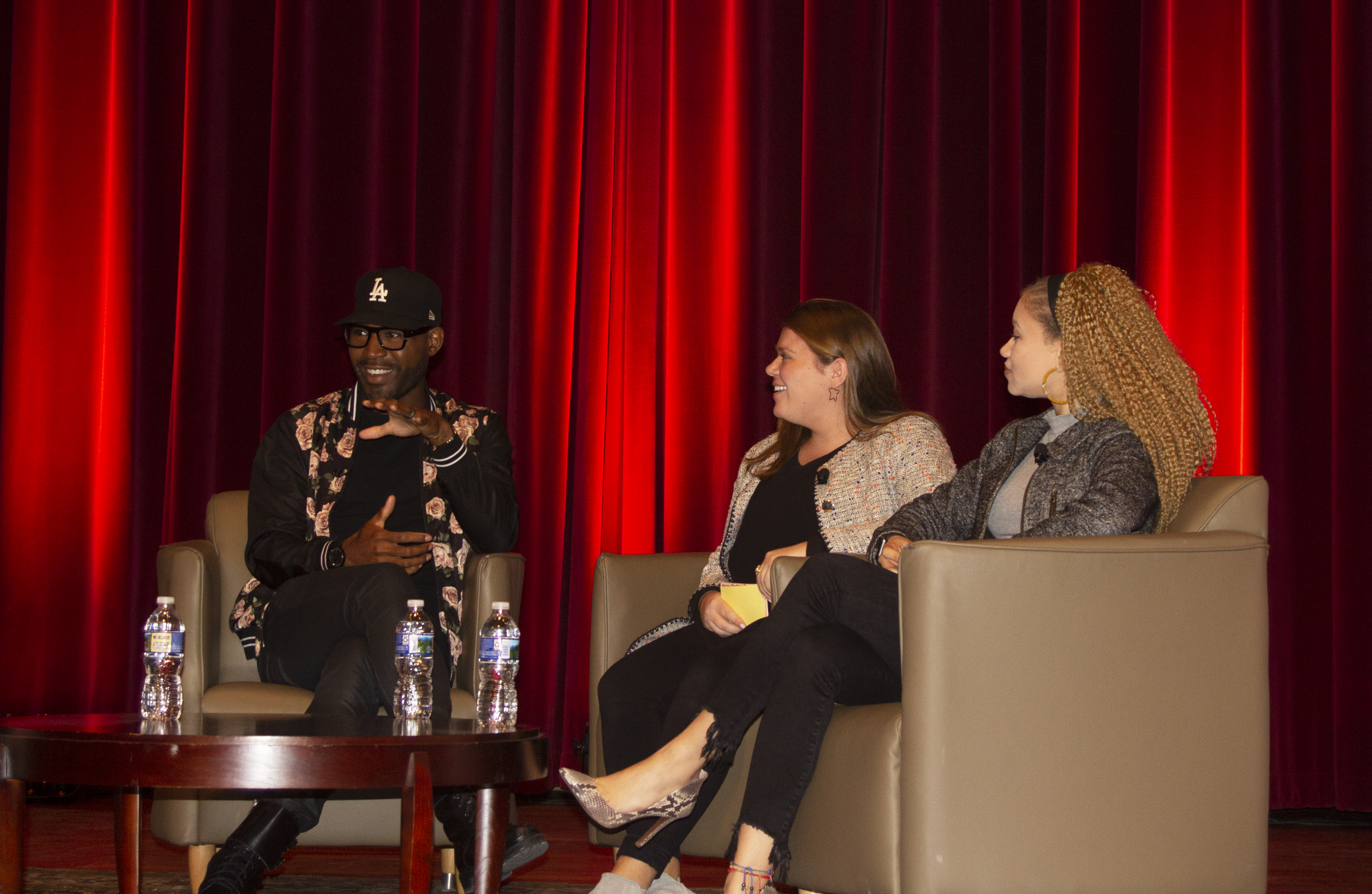 Karamo Brown of Netflix show ‘Queer Eye’ spoke on his experiences as a black, gay man. (Photo by Abi Olofin ’22)

“You are perfectly designed. Part of that design is respecting and loving every bit of you.”

This was Karamo Brown’s message to students as this year’s senior speaker. Brown shared details about his experiences with “Queer Eye,” growing up, relationship with his sons and gave advice to the packed audience in Colton Chapel on Wednesday.

Raised in a predominantly white neighborhood by Jamaican and Cuban parents, Brown did not always have a good relationship with his name because it made him stand out in a way he didn’t want to.

He wanted to be like everybody else, he said. However, Brown said that as he grew up, he began to embrace his name because it was part of his identity.

“Society tells us we need to hide certain parts of identity,” he said. He encouraged the audience to do the opposite.

He said he connected to a Queer African-American woman who, in an episode of the third season of “Queer Eye,” expressed that she didn’t feel a sense of acceptance from the LGBTQ+ community as well as the black community because there was a message that she wasn’t “black enough” or “queer enough.” He had had a similar experience in his community early in life, but later learned to embrace himself.

He said that upon deciding to become a certified social worker, he stopped letting other people’s fear determine the decisions he made.

Brown further advised the audience that “comparison is the thief of joy.” He cautioned them to make sure not to compare themselves to their peers when it comes to jobs or marriage after college because people’s experiences in life are “perfectly designed” for them.

When you start to compare yourself and your journey, you don’t respect it, he said.

One shouldn’t be afraid to hear or use the word “no,” according to brown. He shared how hearing “no” actually encourages him to keep working hard to achieve his goals.

“Every time I get a no, I think critically what is it I could do to be better,” he said.

Additionally, he said that one shouldn’t be afraid to say “no.” He added that we need to create boundaries to have what we deserve.

In making sure the audience had a clear understanding of this message, Brown made the audience turn to their neighbor and tell them to not be afraid to say no. The audience all did it in unison.

Although Brown is labeled as Queer Eye “Culture Expert,” he said he doesn’t like the title, because his work in the show doesn’t actually teach the “heroes” of each episode about culture.

The term culture was a throwback to the original cast, according to Brown, who exposed the “heroes” to art and ballet shows, but that he focuses more on internal changes.

Brown said that he is the one who spends most of the time with the “heroes” of the story, but that when the first season of the show came out that didn’t show. He acknowledged that because the show edited out a lot of the raw moments he spent with the heroes, people questioned his role in the show and asked “what does he even do?”

As a 22-year-old, Brown appeared in “Real World” (1992), where back then he was “full of angst,” Brown said. In the show, he said he wasn’t comfortable enough with himself to the point where he could show vulnerability.

One of the reasons why Brown didn’t show much emotion during his appearance in “Real World,” was due to the cultural expectations of what being a man means.

When he was a football player in high school, he remembers breaking a bone in his foot and his coach yelling at him to “walk it off.” Simultaneously, a girl on the track team missed one of the hurdles while running and drew a small amount of blood, causing all of the coaches to instantly come to her aid.

Brown said that this moment was emblematic of the different expectations on how much pain men are allowed to feel. He added that reality television helped him grow because he was watching himself back and didn’t enjoy what he was looking at.

Brown’s recent book “Karamo: My Story of Embracing Purpose, Healing, and Hope” was displayed for sale after the talk on Wednesday. The book touches on different aspects of his life such as being casted for the reboot of “Queer Eye,” overcoming “personal issues of colorism, physical and emotional abuse, alcohol and drug addiction, and public infamy,” according to Goodreads.