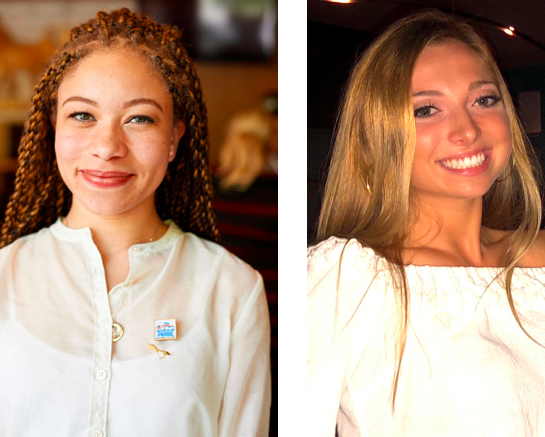 Fraynette Familia ’20 (left) and Mia Coutinho ’20 (right) are running to be student government president. (Courtesy of Familia and Coutinho, respectively)

Student government is going into its second year under its new structure, and both candidates are quite familiar with it. Mia Coutinho ’20 helped create it and served on it last semester as Vice President, before going abroad this spring. Fraynette Familia ’20 has served this year as Director of the new Equity and Inclusion committee.

One theme common to both of these candidates’ platforms is that the new structure, which doubled the size of student government and created several committees which represent different sects of campus, is certainly a positive, but there is still potential for growth.

One notable difference between the two, though, was the path that led them to being interested in student government.

Coutinho described how she was grateful to be a part of the Lafayette community in her first semester on campus and that she wanted to give back by serving.

Coming from a different angle, Familia noted that it was a desire for change that sparked her interest in joining the student representative body: she and people she knew experienced issues on campus which she felt like she could help solve through student government.

Starting a work study job her freshman year, she experienced firsthand that the wage, set at the federal minimum of $7.25 an hour, was too low, she said. As director, her committee submitted a proposal to raise the campus minimum wage which is currently under review by President Alison Byerly’s cabinet. She brought her concern directly to the administration to start the process off.

While Coutinho’s original motivations may not have been immediate change, she wrote in an email that one of her proudest accomplishments was rectifying concerns of “accessibility and women’s health services” at Bailey Health Center, which she first noted as a freshman.

“I voiced my concern with the short hours of operation Bailey’s had,” she wrote in an email. “I also met with [administration] and workers at Bailey’s and spearheaded a campaign to decrease and fix the cost of the Plan B pill,” and better advertise its availability.

“I joined up with the Gender & Sexuality Office to spark [this] initiative, and in one term, the mandatory pregnancy test [before purchasing the Plan B pill] become optional, the price [of that pill] was fixed and advertised at…$30 [which is cheaper] than available at stores in Easton,” she added.

Familia said that as Director of Equity and Inclusion, she has been called on by other committees to be a voice for her committee’s purpose. If she were elected, she said, she would work to ensure that the job of equity and inclusion wouldn’t solely fall to that one committee—as it has at times this year—but that each committee would have inclusion on their mind in everything they do.

Coutinho said that through her strong organizational skills, she would ensure that the committees of student government would be able to reach their full potential.

“I worked hours to build [new student government that is more transparent and more representative],” she said.

“However, we’re still learning to meet all the needs of different groups on campus, and I think one of the biggest challenges will be as always truly representing the students,” she added.

Over the last couple of years, student government has seen a sometimes tense relationship with marginalized students ebb and flow. From resignations at the start of last year to controversy surrounding the funding of kente stoles for Association of Black Collegians and Hispanic Society at Lafayette, there have been points of controversy.

“I think in general the relationship with…marginalized students…in the past hasn’t been so great. They didn’t feel represented,” Familia said, adding that she thinks that tensions have eased this year especially with the formation of the equity and inclusion committee. “We’ve worked a lot to mend our relationship with marginalized students especially in my role” and she’d continue this process as president if elected.

Coutinho, abroad in Spain, did not know details about the kente stole budget decision, but she said she would make it a priority to make students of marginalized identities feel more comfortable approaching student government.

“One of my goals was to…make it an absolute priority that historically, systematically marginalized groups would have a voice on this new student government,” she said. “I would make it absolutely a priority to specifically meet with concerned groups on campus as president.”

Clarification (4/5/2019): It was originally unclear who stated in this article the quote which begins “I think in general the relationship…” Fraynette Familia stated that quote. The article has been updated to reflect this.