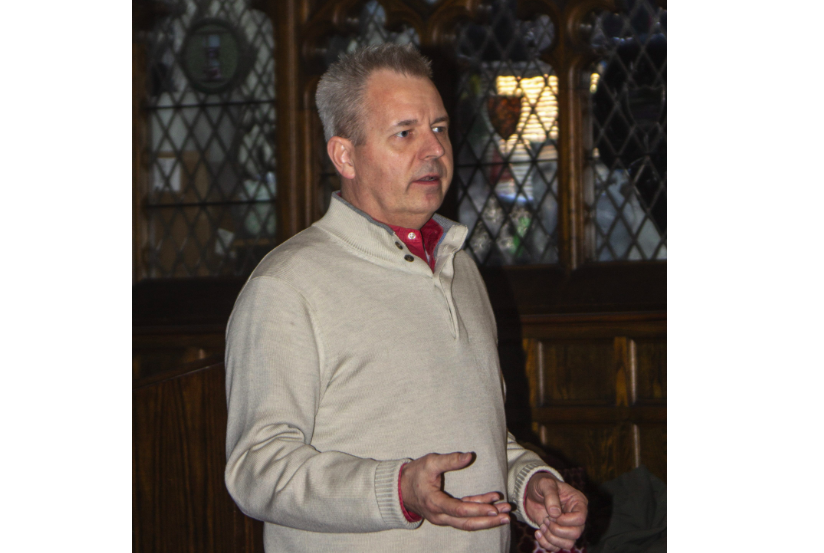 Tom Woods spoke about his experience with sexual assault on Wednesday. (Photo by Abi Olofin ’22)

Tom Woods wanted to make one message particularly clear during his talk: anyone who keeps their story of trauma a secret does themselves a disservice.

“We are as sick as our secrets,” he said. “And we’re not broken…we’re going to be a little different because our brains went through something.”

Woods is not the typical kind of speaker students might expect to see.

In fact, he didn’t even want to stand on the small stage in the front of Hogg Hall Interfaith Chapel. He stepped off the slightly raised platform at the start of his talk on Wednesday evening, standing on the same level as those in the audience.

His talk that ensued was deeply personal and passionate. Having experienced two instances of sexual violence, Woods depicted his life thus far in a way that made clear that the road has not been easy.

“I’m not looking for sympathy,” he said. “I’m just telling you what the fuck happens to a person when another person does things like this to them.”

He spoke as part of Pards Against Sexual Assault’s I Ask Campaign during Sexual Assault Awareness Month. He’s spoken about his experiences in front of students before, and estimated about 20,000 total have probably heard his story.

At about age eight, Woods was kidnapped, raped and assaulted by a group of three or four teenage boys while at camp. He escaped with his life, but returned home from camp a different boy, incapable of expressing to his father what had happened to him.

At age 10 or 11, he discovered alcohol—and found himself thanking God for the drug which could alleviate his trauma-induced anxiety and fear.

He is a recovering addict, he said, now having spent nearly a decade in therapy. The childhood trauma he suffered was not the direct cause of this, he added, but he does believe that there is a correlation between such trauma and substance use disorder, a term meaning addiction.

Woods is the founder of Workforce Recovery Solutions, working with human resources departments “primarily educating them on addiction prevention, but basically [it’s] like a triage center” to get people who have gone through trauma the help they need, he said. His non-profit organization works with middle school and high school students on addiction prevention.

Woods used alcohol “on and off” to help numb his pain during his preteen and early teen years, he said. At 15, he was once again attacked, this time by his summer boss. Woods was able to fend him off, but damage was still done. Old wounds opened up from his previous experience.

Ridicule from friends, after he told them what his boss had done, led him to laugh off the event in an attempt to stave off any further mockery.

He previously sought guidance through his religion, Catholicism, and even joined the priesthood for three years. The child molestation and cover-up scandal eventually led him to quit the priesthood. The disgraced Cardinal Theodore McCarrick, who ordained Woods, has since been defrocked by Pope Francis after being found guilty by the Vatican of sex crimes against children and adults.

On both occasions where he was assaulted, Woods said that like others do, he blamed himself, although he was clearly not at fault.

He added that he believes that the statistics reported on sexual assault probably undershoot the true numbers, since only those who admit what happened to them can be included in reported statistics.

Woods said that Gen Z and millennials give him great hope for the future. The young people of today are not simply all talk; they follow through, he said.

Other questions from the Q&A included why Woods decided not to tell his family about what happened to him—which he said was a result of not wanting to cause them unnecessary trauma, a decision he said he and his therapist came to. Another audience member asked how he incorporated his trauma into stand-up comedy, which he did for a few years—he said that making people laugh made him feel better about himself, temporarily.

After the talk, in an interview with The Lafayette, Woods said that typically during these kinds of Q&A sessions, someone will decide to speak up about an instance of sexual misconduct or violence that happened to them.

“I was hoping for more, ‘I’m going to take a chance, and in my question, it’s going to be very clear that it happened to me, as well,'” Woods said.

Katie Weimann ’20 asked Woods during the Q&A how rhetoric could be better adjusted surrounding sexual violence.

Woods discussed his distaste for the word “survivor,” suggesting that perhaps a term without negative preconceived notions and a more positive connotation attached to it could be substituted.