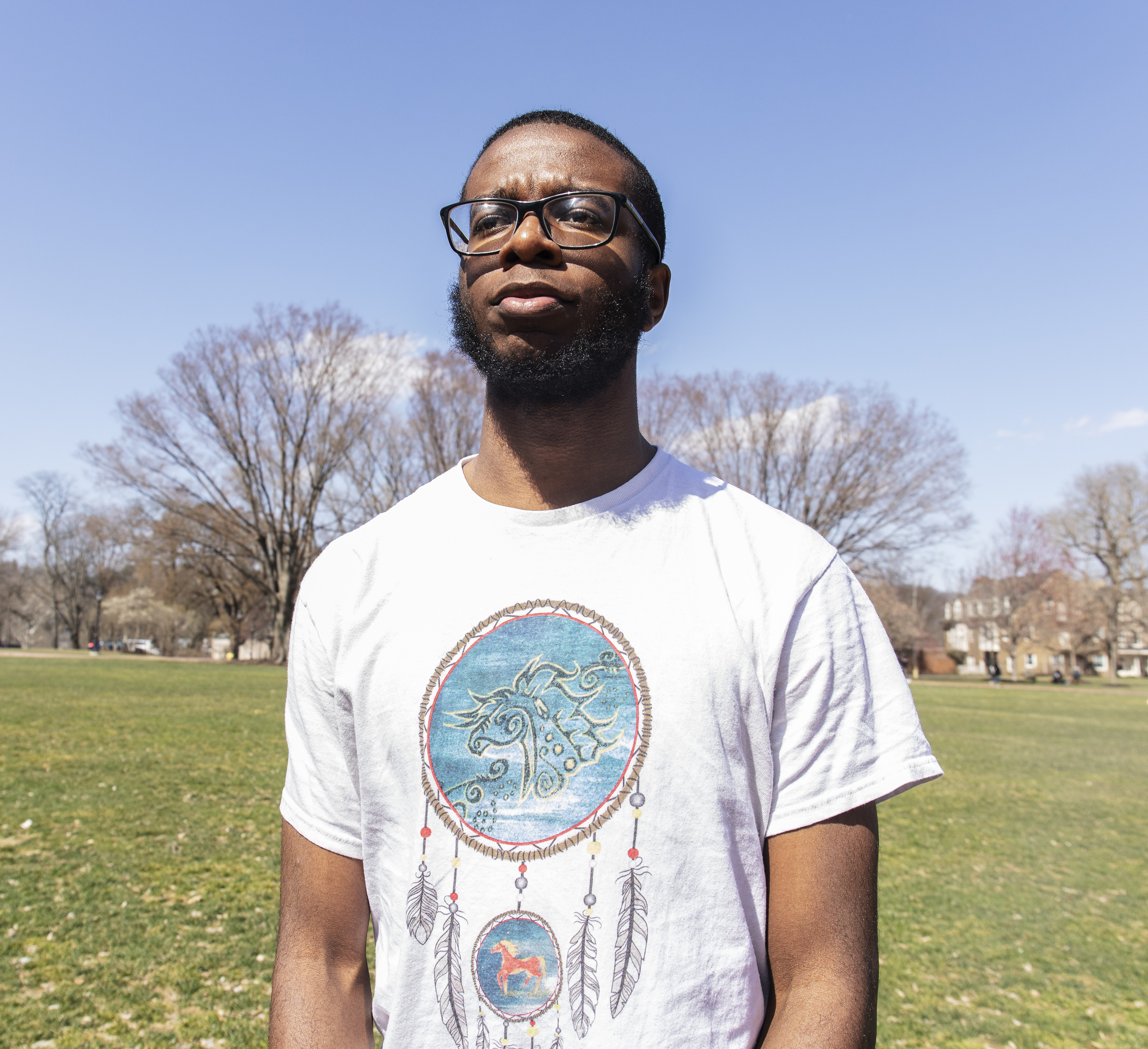 Upon the showcase of his recent plays ‘Half of Me’ and ‘In September,’ Jonathan Arrington hopes to pursue theatre after college. (Photo by Elle Cox ’21)

Jonathan Arrington ’21 was first introduced to playwriting at an early age as a creative outlet.

“I always would write plays when I was younger, but I would never take them seriously,” he said.

As a first-year student at Lafayette, Arrington’s play “Casting Call” won the 10-minute play competition out of a diverse pool of participants.

His interest in theatre sparked during that year when he saw Julia Cho’s “Office Hour” at The Public theatre in New York. According to The Theatre Times, “[Office Hour] ruminates on the persistent and ghastly problem of gun violence in the U.S.”

“[There] was this moment where the guy on stage literally went in his backpack, pulled out a gun and shot the teacher,” he said. “But it looked so real, like an actual bullet shell came out of the gun and it was so loud.”

That moment, he said, he knew he wanted to emulate that sense of realism in his very own works.

Arrington loves the anticipation and “intimacy” between the crowd and the actors.

“How it’s literally you in a space and you’re like, ‘What is going to happen next?’ And that intimacy with the crowd and the actors is really just a beautiful vibe,” he said. “That really got me into it, having that control over people’s emotions.”

After working on his plays, “Half of Me” and “In September,” for eight to 10 months, Arrington was able to showcase them to an audience this past Thursday and Friday at the Studio Theater.

“I thought the turn out Friday was amazing,” he wrote in an email. “[There were] people sitting on the ground and…they had to roll more chairs in. They were all crouched together [and] I was like ‘damn, my cast and crew and I really packed a house.”

“Half of Me” was about an expecting interracial couple who get a visit from the white husband’s racist mother.

The play battles with relevant issues such as the husband’s lack of communication with his mother about his engagement to a black woman, his biracial son who will be “just as black as he is white” and “the attention [on racism] that lingers over from generation to generation,” he said.

When reading over “Half of Me,” Arrington said he realized that it ended on a sad note. Therefore, to “bump people up,” he wrote “In September.”

The play is about a boxer that heavily struggles with his mental health. At the end, “In September” carries a far more uplifting note when the character realizes his self-worth and all the people that care about him.

Arrington had planned to take a break after finishing directing his plays. However, he said the break only lasted about two days before inspiration struck again and he began writing a new play.

His passion for theatre continues, he said.

Arrington had also just ordered a beat machine because although he doesn’t consider himself musically gifted, he said it provides just another creative outlet for him to express himself.

Arrington’s theatrical talents are not just limited to writing. He had also acted in several productions by the college including “Taming of the Shrew,” “She Kills Monsters,” “Disgraced” and a cameo in his own play, “In September.”

Arrington aims to develop a full-length play backed by the school that can run over a weekend with matinees, rather than just two shows, he said.

After college Arrington hopes to be a filmmaker, but is tentative to use the prefix “independent” because he believes the word has been “misconstrued.”

“It’s formulated now in a lot of ways, but I just want to make films and be a commissioned playwright for a theatre somewhere in this big globe.”

As for long term goals, he plans to own a theatre after college, as well as a multiplex movie theater.

“I want to own a multiplex of movie theaters and theatre stages and be able to simultaneously run plays and films, but not just films that just come out…show films from back in the day like “The Godfather” or “Star Wars,” he said. “Or when we get older, we can go take our children to go see “Get Out” because that’s like our generation.”

“Just like incorporating that in to theatre, but also giving people the space to show their own work because there [are] so many talented people out there that don’t necessarily get the opportunity,” he added.