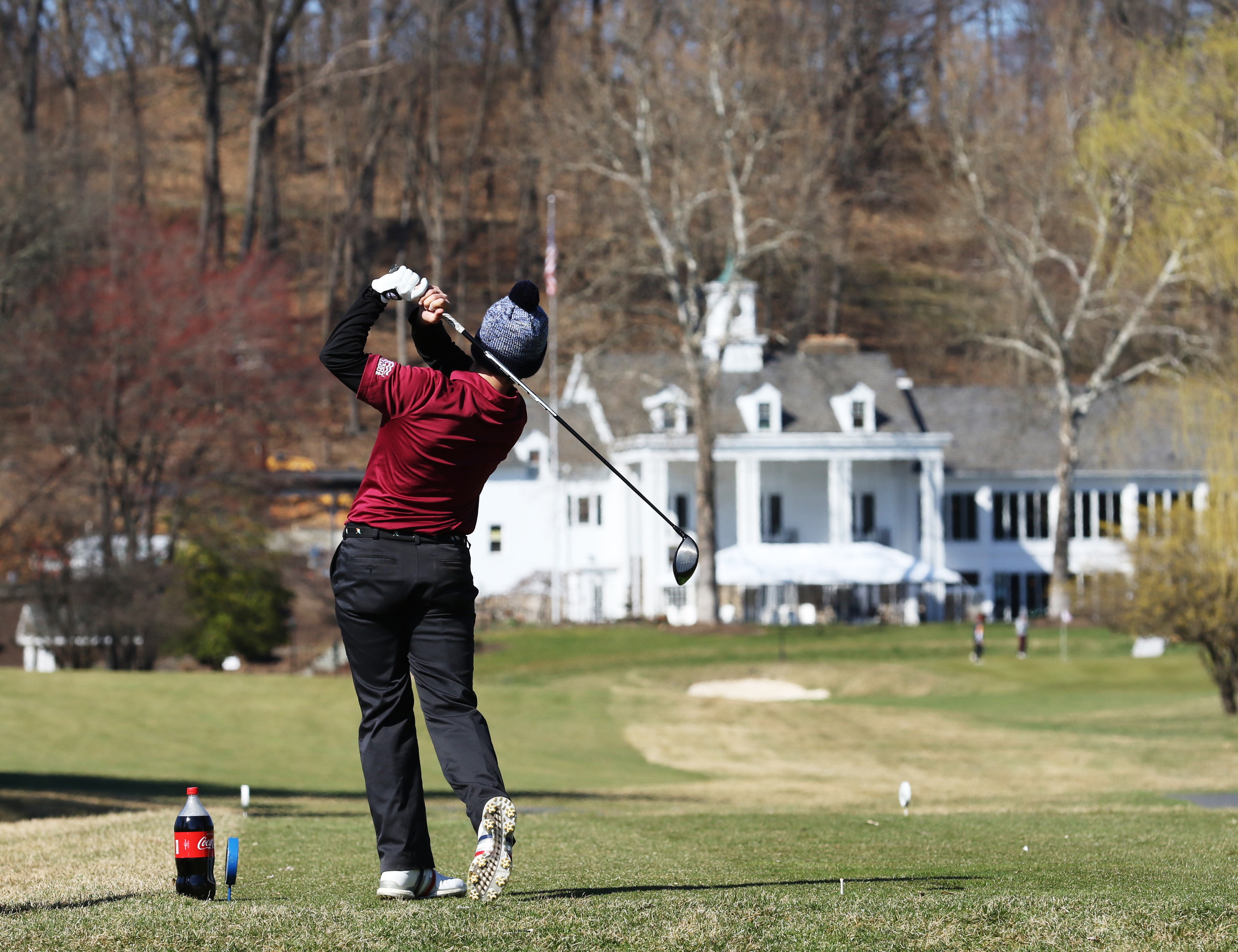 Junior Will Halamandaris chipped in with a 12th place finish as the golf team tied for second place. (Photo courtesy Athletic Communications)

The men’s golf team opened up their spring season with a three-way second place tie at the Lafayette Collegiate Invitational, hosted by the Leopards at the Steel Club in Hellertown, Pa. The runner-up finish is the highest the team has had at the event, which has been held annually for 17 years.

“Our biggest strength this weekend I’d say was our perseverance,” junior Will Halamandaris wrote in an email. “It was really tough conditions both days, it was very cold and very windy but we hung in there and didn’t let the weather get the best of us.”

In addition to challenging weather, the event was the first team competition for the Leopards since the Florida Gulf Coast University Classic during the last weekend of October.

“I’d say our biggest weakness this weekend was just some rust here and there, but that kind of thing happens when we haven’t played a competitive round since October or November,” Halamandaris said.

At the Lafayette Invitational, freshman Ryan Tall led the Leopards with a tie for sixth place after shooting an even par 144 over two rounds. Halamandaris just missed the top 10, tying for 12th place with a 147.

“Ryan Tall really played great this weekend, he really showed that he is capable of playing great golf and hanging in there with the best of them,” Halamandaris wrote.

Sophomores Cole Berger and Brendan Cronin finished with scores of 150 and 151, respectively, good for 27th and 33rd place ties.

Since the conclusion of their fall tournament play, Berger said the team has been working hard at their indoor facility at the Steel Club to prepare for the spring season.

“[We’ve been] putting in some good hours in the weight room with the help of our trainer Dave Downey,” Berger wrote in an email. “Coach Hut [Hutnik] and our captains Pat [McGinley ’19] and Trey [Croney ’19] also keep us focused and on track during our long sessions indoors.”

“We also took a trip to Florida over spring break which really helped us get into good condition for our upcoming season,” Berger added.

With just five more competitions left before the Patriot League Championship, Berger said the Leopards are continuing to put in time on the course and in the weight room as a group while also focusing on each individual’s needs.

“We are always improving our own individual games and with that we all have our own individual weaknesses,” Berger wrote. “However, staying zoned in until you hit your last putt is what needs to be done every round and it is one thing we can all always work at.”

“I feel like what we are working to improve depends on the individual, we all have things that we feel like weren’t our best last weekend so we will be working to improve,” Halamandaris wrote. “We are going to try and work on those things and see if we can’t improve upon our second place finish and go out there and win at Villanova [this weekend].”

According to both Berger and Halamandaris, the ultimate goal for the Leopards this season is to capture the Patriot League title.

“We want to win the Patriot League tournament badly, and we know we can do it,” Berger wrote. “It is all about if we can play well as a team, all of us have to play well at the same time.”

“Our biggest goal for the season in my mind is to win the Patriot League Championship,” Halamandaris added. “I feel like we really have a good chance this year and if we can continue to work hard and improve our play I feel like we can come home with the title at the end of the year.”

The Leopards head to Malvern, Pa., on Monday and Tuesday to compete in the Wildcat Invitational, hosted by Villanova University.