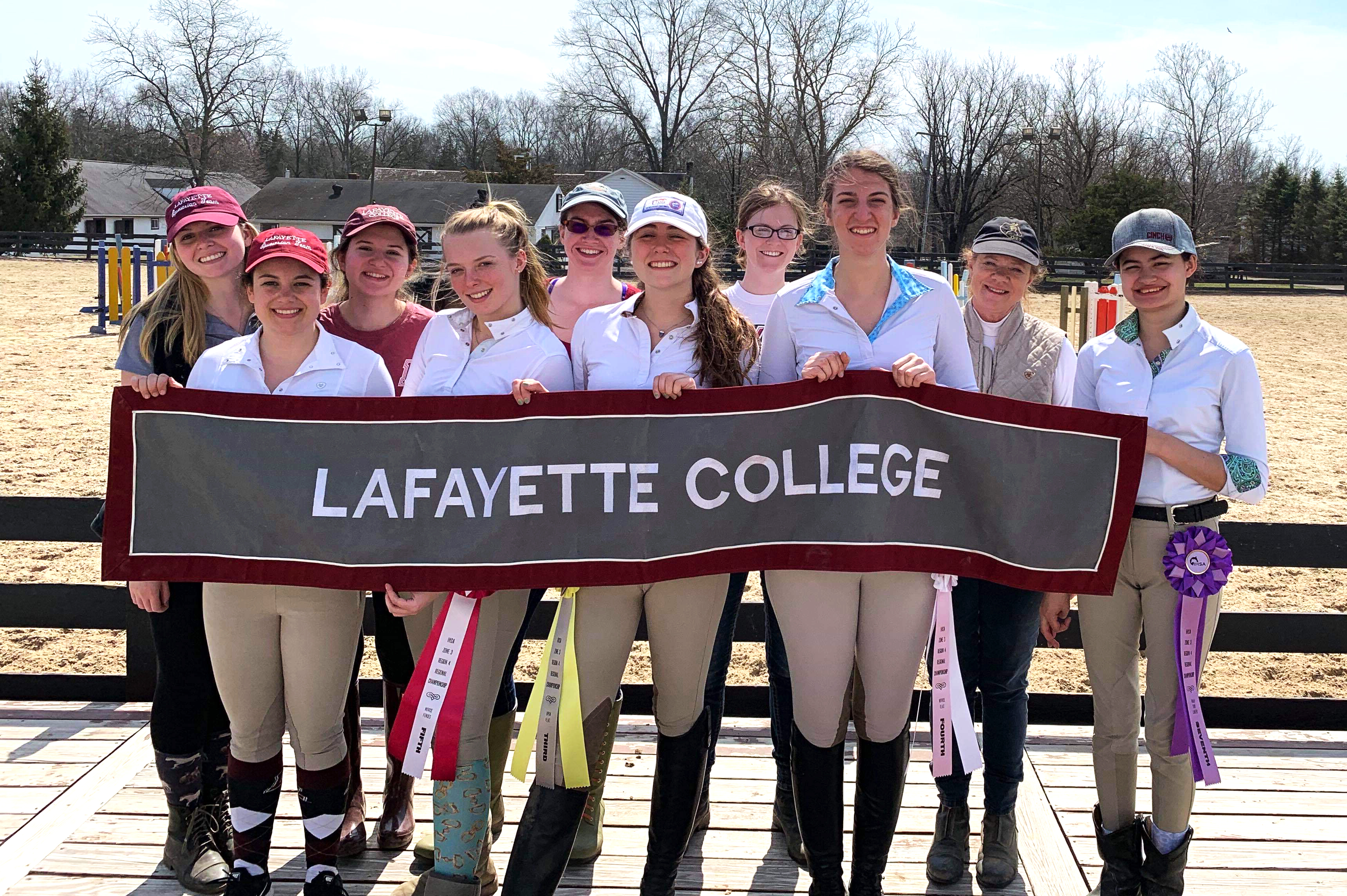 Equestrian’s regionals performance sends Perrotti to zones as the team heads into the Battle in the Saddle. (Photo courtesy of Justine Perrotti ’19)

“I was a little nervous going in because the horse in warm-up refused around ten fences and a rider fell off at one point,” Perrotti said. “[Head coach] Kelly [Poff] and I developed a plan, supporting leg at the base at each fence and making sure to stay straight when going to the fence.”

Perrotti’s win in intermediate over fences was after finishing third out of three in the flats. Despite the result, she said she felt ready for a good follow-up performance with a record of success in showing.

“Even with practicing without stirrups the day before and having to drop them in the class, I felt pretty confident in my ride,” she said. “Even though I didn’t get to qualify for zones in the flat, I know I rode the best I could and against some of the best riders in the region.”

“Grace Nicholas had a beautiful round on Lucky [in novice fences], and ended up in fifth out of a large class,” Perrotti said. “Charlie Brownstein qualified [individually] for BITS [Battle in the Saddle], placing fourth in novice flats with an eight-person class.”

This was the team’s first outdoor show of the semester, and last year’s captain Becca Bender ’18 reunited with the riders there.

“[Bender] was my orientation leader and the reason why I joined this team,” junior Julia Lee said. “Before that I hadn’t ridden in seven years.”

“We all missed her so much,” Brownstein added.

At a regional banquet, Perrotti was awarded best sportsmanship in the region. She said it was an honor to be nominated by both her own team as well as others, and that she began to tear up at the presentation.

“I always try to put my team members first and make sure everyone gets what they need to be ready for each show,” she said. “For members of other teams, I would always help as much as I could with everything from lending a crop to giving pointers and getting my team to help move jumps between classes.”

Brownstein said Perrotti “1000 percent deserved” the award, and that she was also in the running for captain of the year ahead of the ceremony.

“Justine has worked incredibly hard for the past four years and has made an impact on everyone in the region, regardless of who they compete for,” Brownstein said. “She was always on the sidelines cheering all riders on and made sure everyone was happy.”

With the season close to ending and a change in student leadership coming with Perrotti’s graduation, Perrotti said she recently decided to stick around to help transition the team to new leadership.

“After talking with my parents, we decided I wanted to do some investment riding [buying and selling horses] and stick around as assistant coach to help the team because our president [sophomore Amanda Fanning] and vice president [sophomore Emma Wilson] are both abroad now.”

Next up for the team will be BITS and zones, separate events which will take place this weekend. The team qualified for BITS with the second place finish in the region. Perrotti, who will compete in zones at the same place, is not allowed to do both shows, so freshman Gaby Cinquini will compete in her place with enough points to qualify behind her.

“Going to zones for my third year in a row is slightly frightening because there is very tough competition,” Perrotti said. “With enough practice this week, I hope to ride to the best of my abilities and show off for Lafayette in zones as an individual.”