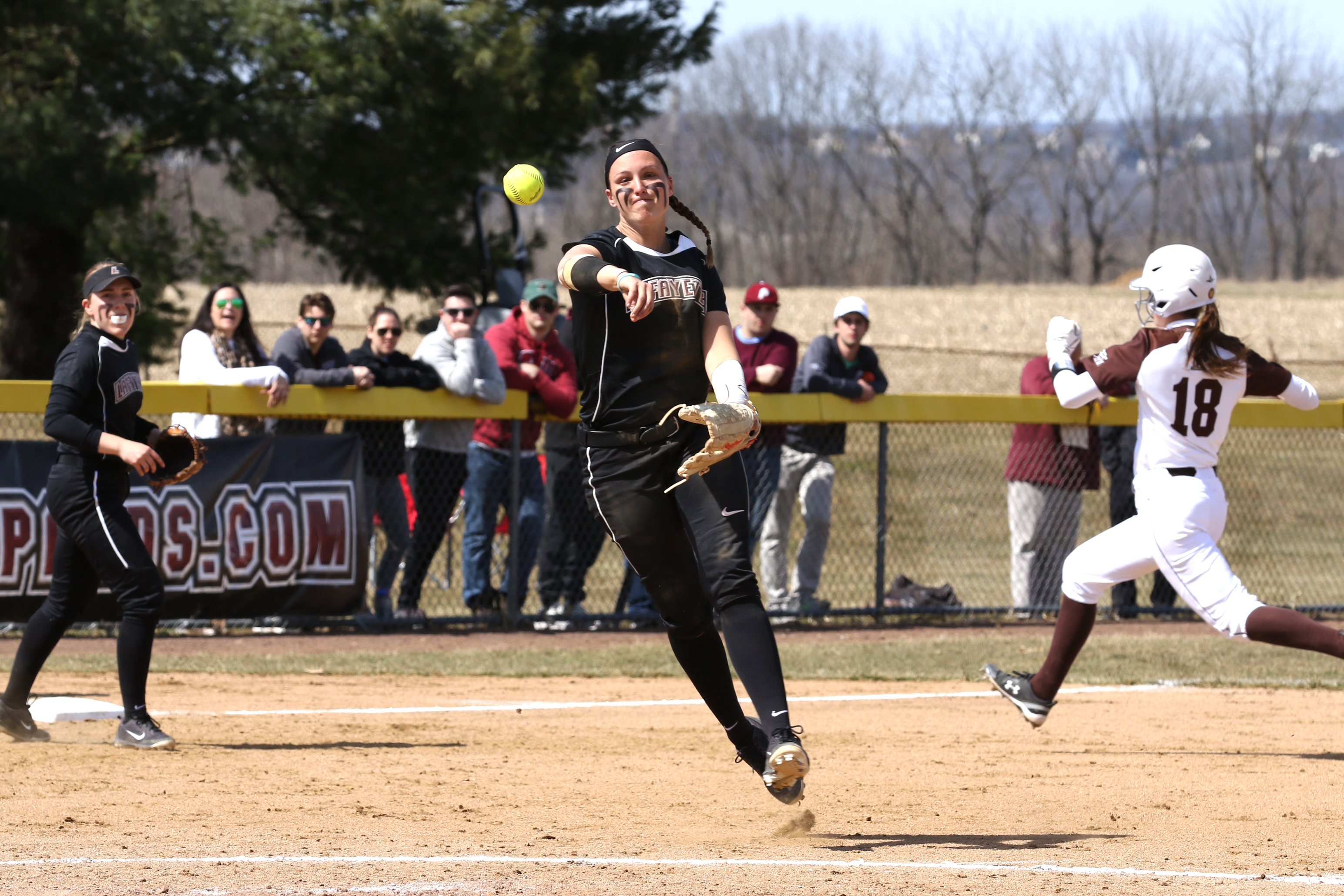 Softball gave Drexel a pair of close games after being swept by Lehigh. (Photo courtesy of Athletic Communications)

The Lafayette softball team travelled to Philadelphia, Pa., on Tuesday for a doubleheader against Drexel, losing the first game 6-7 before a lack of daylight cut the second game short, resulting in a 8-8 tie. Last weekend, the Leopards were swept in a three game series by rival Lehigh to open conference play.

In the first game against Drexel, after pushing across two runs in the first inning, RBI singles by freshman first baseman Hannah Lee and senior catcher Maddie Wensel gave the team a 4-3 advantage in the sixth. The lead was extended to 6-3 after a two-run double off the bat of junior catcher Malori Pojar.

“I think we showed up offensively, but our defense was a little rough,” said sophomore catcher Kaitlyn Rarick. “We put up a decent amount of runs in each game and were able to score in multiple innings, which is important to us.”

In the bottom of the seventh inning, a two-run double for Drexel brought the score to 6-5 in favor of the Leopards. After an intentional walk, a fly ball lost in the sun resulted in an infield single, tying the game at six. A hit batter resulted in a bases-loaded situation for Drexel, and a walk brought home the game-winning run.

“Our pitchers threw well, but our defense struggled,” Rarick said. “We made a few too many errors, some in key moments, allowing Drexel to take advantage of those mistakes and come out on top.”

In the second game of the doubleheader, the Leopards trailed the whole game until the top of the seventh inning. A two-out single by Pojar brought home senior shortstop Brooke Wensel, and also scored Maddie Wensel due to a Drexel error, tying the game at eight. The teams played two more scoreless innings before losing daylight, leading to the tie.

“We made the most of our opportunities with runners on base,” said Rarick. “We should have been able to win both games with the amount of runs we put up.”

Against Lehigh last weekend, the Leopards dropped the first two games of the series by a combined 10-1 score before battling to a 3-4 loss in the final game.

In that close contest, Lafayette struck first after loading the bases in the second inning. Freshman third baseman Natasha Miner opened the scoring with a two-run single, and all three runners came around to score on the play after the Lehigh outfielder misplayed the ball.

“At practice we’ve been focusing a lot on situational hitting, and it showed in these games,” said Rarick. “We hit really well with runners on base which produced a lot more runs for us.”

After four scoreless frames for the Leopard offense, a seventh inning home run for the Mountain Hawks gave Lehigh the lead for good.

“I think as a team, we need to be more confident in the fact that we can win these games,” said Rarick. “Sometimes when the games are close we seem to get nervous and tense up, but if we have a little more confidence and just have fun playing the game, I think we will find ourselves coming out on top.”

Next up for the Leopards is a three game series against Army starting on Saturday at noon.