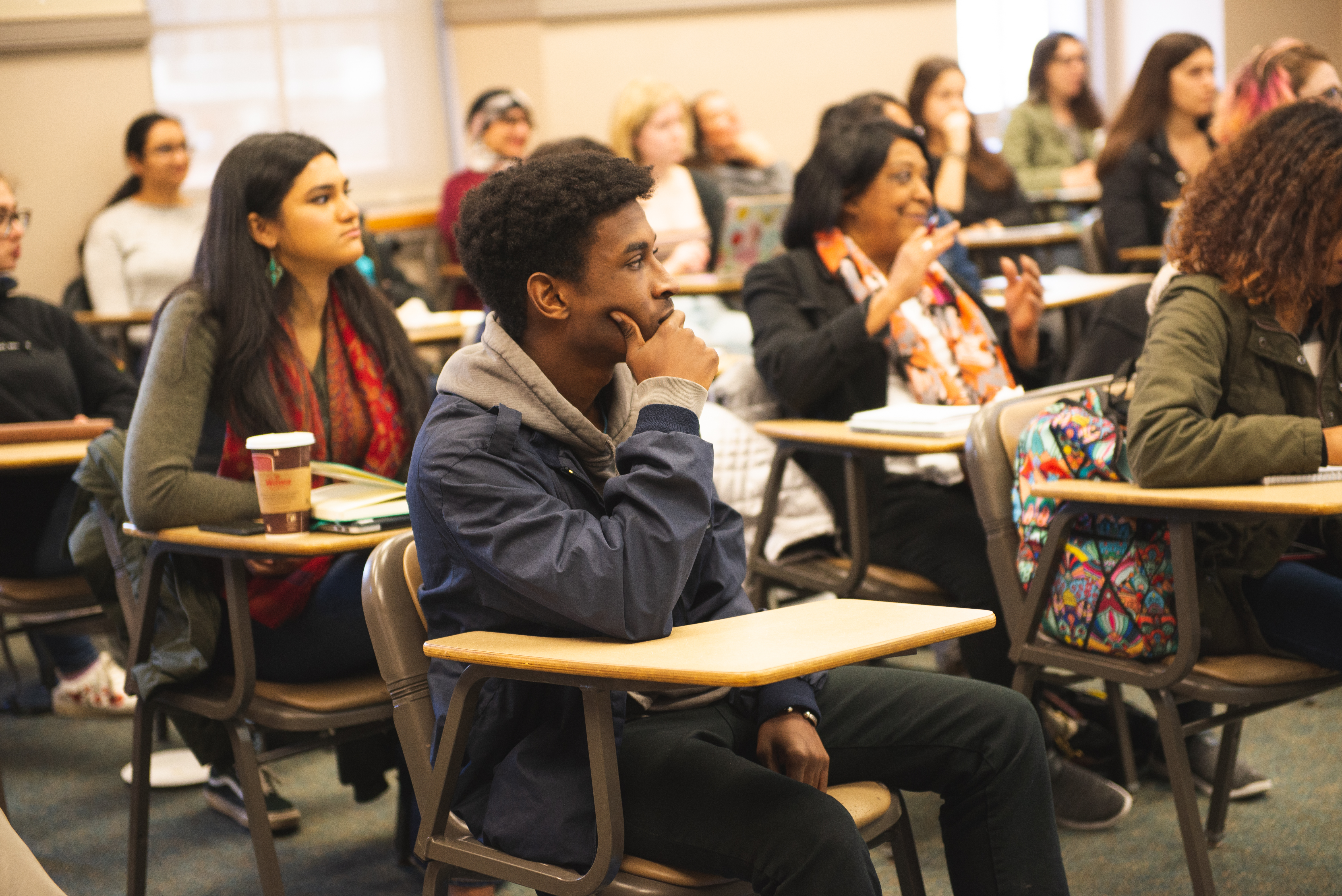 Students and faculty members gathered for a lecture on the connection between Islam and Feminism on Tuesday. (Photo by Brandon Marin ’22)

Feminism and Islam are complex topics, and when considered in relation to one another, many differing views emerge. Some people, mostly men who see through a colonial, traditionalist lens, view them at odds with one another. However, the majority of Muslims, as history professor Hafsa Kanjwal described, agree with feminist ideas.

Kanjwal and Africana Studies professor Wendy Wilson-Fall described those and other complex viewpoints on Islam and feminism at their talk Tuesday.

Kanjwal explained that many followers of the religion see it as a more “egalitarian” faith, although they may not be self-proclaimed feminists.

“I would argue that the vast majority of Muslims would agree with many feminist ideas or values,” Kanjwal said. “They might not call themselves feminists because there are some that would maybe say that Islam is inherently a feminist religion. So, to be a Muslim would be that you are a feminist.”

“But others, as there’s been a number of Muslim women in recent decades, they do proudly take on the label,” she added.

Outside of Muslim responses or approaches to feminism in relation to Islam, there are two other broad categories that exist, secularists and reactionaries, according to Kanjwal.

A secularist is someone who originally was a Muslim but had to leave the religion due their perception of its patriarchal structure. They reject “everything Islamic.”

“They have for sure internalized this rhetoric that Islam is a patriarchal religion,” Kanjwal said. “This group doesn’t necessarily get much traction in the Muslim world because their approach to Islam is so negative and hostile.”

Reactionaries, on the other hand, are “mostly made up of men” holding a similar mindset to people from the colonial days, who are critical of feminism and its ethics.

“[They] see feminism as an entirely Western force that’s being deployed to divide and take Muslims away from their religion,” said Kanjwal. “They see it alongside things like liberalism and more an empire that exists in terms of this relationship between Islam and the West.”

Reactionaries reflect an older aspect of Western culture: their views often align with “19th century European attitudes”—traditional, colonial approaches to women’s limited economic value and their responsibilities in the household such as preparing meals and handling the bulk of childcare.

Wilson-Fall described how there is a “reaction” to these ideas of women’s roles in society, as well as the emphasis on sex in the Western world. Her area of expertise, in Sahelian West Africa, has been an Islamic region since the early tenth century.

“[Western videos] promote images that are really abhorrent to Muslim communities, of the focus on sex that exists in the west is strange to people in the Sahel,” Wilson-Fall said. “That a woman could be reduced to a sexual partner is a very abhorrent thought.”

One reason that Islam is often associated with less freedom for women stems from the emphasis on marriage as a way to benefit the broader community, rather than for personal reasons.

“In many Muslim communities, getting married is considered following your duty as a Muslim woman, it has very little to do with whether you like marriage, whether you like children,” Wilson-Fall said. “What concerns society is how you are contributing to the reproduction of society.”

“So the emphasis is not on the individual, but on the community,” she added.

“Every Muslim is responsible directly to God, so that is also true for women,” Wilson-Fall said. “For them, God is egalitarian and God is a feminist. So that’s where I think this difference in terms of the source of empowerment is where Islamic feminism distinguishes itself from other strands.”

Muslim feminists in recent years have been inspired by “third-world feminists,” who take an intersectional approach to understanding how different groups of people may be at a disadvantage due to a variety of factors.

“[Muslim feminists] differentiate a particular kind of Islamic feminist that’s different from liberal, secular, western feminism,” Wilson-Fall said. “Many of them are inspired by black feminists who try to bring into the different categories of understanding class, gender, race, sexuality, and religion.”

Islamic feminism continues today with the same focus on equal opportunity, much as it has in the past. According to Kanjwal, Islam’s religious text, the Qur’an, gave women rights that didn’t exist in the West for centuries after, such as the right to have a divorce and the right to own property.

“There’s a lot of women’s groups and other groups today that are really fighting against domestic violence, against sexual trafficking, and a whole host of other issues, and working in tandem with other feminist organizations or other women’s rights groups,” Kanjwal said.

“In many ways you’ll see the same emphasis on equality and egalitarianism.”