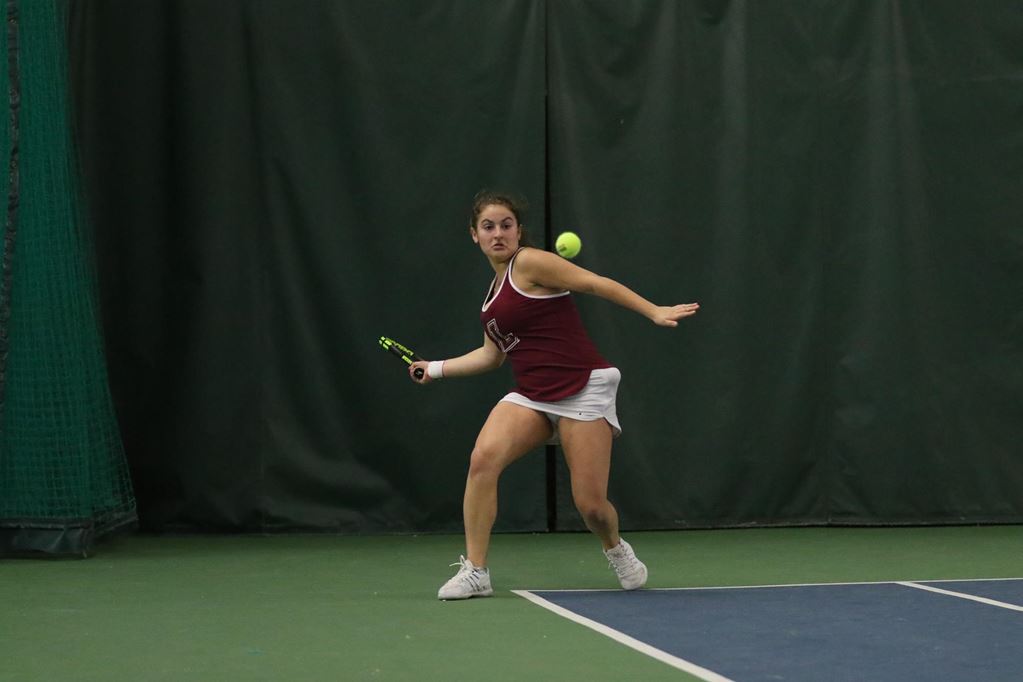 Senior Cece Lesnick is finishing a minor in studio art due to her extra year of eligibility. (Photo courtesy of Athletic Communications)

Lesnick is the first women’s tennis player to receive the accolade since the Patriot League began awarding weekly honors in 2015, and the first since the 2006 season when Sarah Sykes ’08 received a Player of the Month award.

“It means a lot to be the first female player to receive the honor after over a decade,” she said. “I think it is a great sign of the direction our team is going. Coach [Ralph] Van Ormer has been an incredible coach and motivated me to be at the spot I am in right now.”

“[Lesnick] deserves this award this week more than any player,” said sophomore Alexa Cooke. “I see [Lesnick] being one of our strongest players this season. She’s grown since the beginning and has only become more composed, technical, and fun to watch on the court.”

At No. 1 singles, Lesnick started out down 0-5 before storming back for a dramatic victory, winning the first set 7-5 and the second set 6-3.

“I have never come back from 0-5 before,” Lesnick said. “I feel like the best part of my performance was the fight I put into it. I stayed in every point, ran for every ball and gave it all I got.”

“Everyone truly fought, physically, mentally and emotionally to come out on top,” said Cooke.

McCormack and Cooke won their doubles match 6-2 to earn another point for the team, and Conrad and junior Katie Hill grabbed another doubles point with a 6-3 victory.

The team has now won three of their last four matches heading into the spring break, and will have a week off before turning their focus to Patriot League play which begins against Army next Saturday.

“We are reloading with two practice days, focusing on consistency and aggressiveness,” Cooke said. “Our next match versus Army begins conference play and we want to be as prepared as possible, tactically and physically.”

For Lesnick, earning league recognition comes at a good time with the upcoming schedule featuring six straight conference games starting at Army.
“This league honor gives me a ton of confidence going into the Patriot league matches,” Lesnick said. “And also a great feeling towards believing that hard work pays off.”
After spring break, the team will travel to West Point, N.Y., to take on the Crusaders with an early 8 a.m. start.