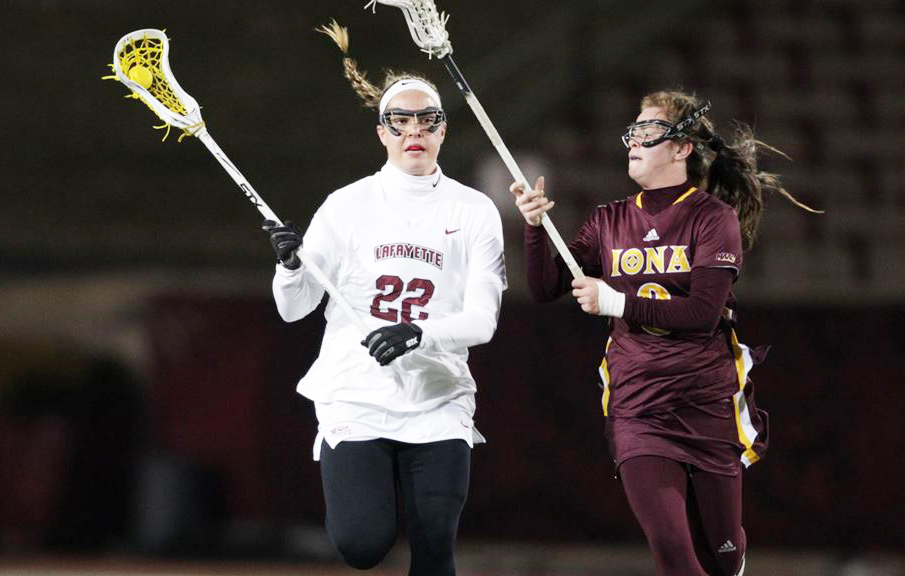 The women’s lacrosse team came up short against St. Joseph’s University’s this past Saturday in a 16-12 loss, flipping the script for a dramatic 13-12 win at Binghamton on Wednesday. The victory moves their record to 4-2 for the season, with Patriot League play beginning Saturday.

In the St. Joseph’s game, the defense was anchored by sophomore goalie Quinn Lacy, who recorded a career-high 17 saves, the most saves by a women’s lacrosse goalie in nearly nine years. Lacy faced a total of 45 shots from St. Joseph’s players, while Lafayette attempted 25 shots in the game.

“Going in to the game we knew that they were a really good team so we were prepared for a high speed and intense game,” Lacy said. “I think that a goal of the season is playing up to our own potential every game.”

Despite the final result, the Leopards kept the score close and led 12-9 with just over 20 minutes left before St. Joseph’s scored the final seven goals in the game.

“Preseason prepared us because we were definitely fit enough to hang with [St. Joseph’s] who is a fast and athletic team,” Lacy said. “[Freshman midfielder] Caroline Curnal, [senior midfielder] Hannah Davey and [sophomore attacker] Colleen Bannon did a great job on the draw circle to help us win draws.”

Curnal and Davey aided the team offensively by winning eight draw controls each.

“I think our strengths as a team include our seniority,” Lacy said. “We have a lot of seniors who have a lot of experience on the field.”

“[The [St. Joseph’s game] was a good test to see where we are at as a team for the season and we know what changes we need to make and what we have to do in order to beat Binghamton,” she added.

The Binghamton game was initially scheduled for March 6, but the matchup was postponed due to freezing temperatures, giving the teams more time to prepare.

The Leopards found themselves in the opposite position against the Bearcats, facing a 12-9 deficit with under 20 minutes left. Junior midfielder Bella Alampi and Curnal narrowed the deficit to just one goal with 13 minutes to go, but it wasn’t until the last five minutes that senior attacker and midfielder Emma Novick notched the tying goal. Alampi’s second goal of the night was the eventual game winner with just three minutes left.

Kirby tallied another hat trick in the victory, and Curnal’s late goal earned her a hat trick as well. Freshman attacker Olivia Cunningham also scored two goals in the game.

The team takes on Holy Cross tomorrow at 1 p.m. in a home matchup to kick off conference play.