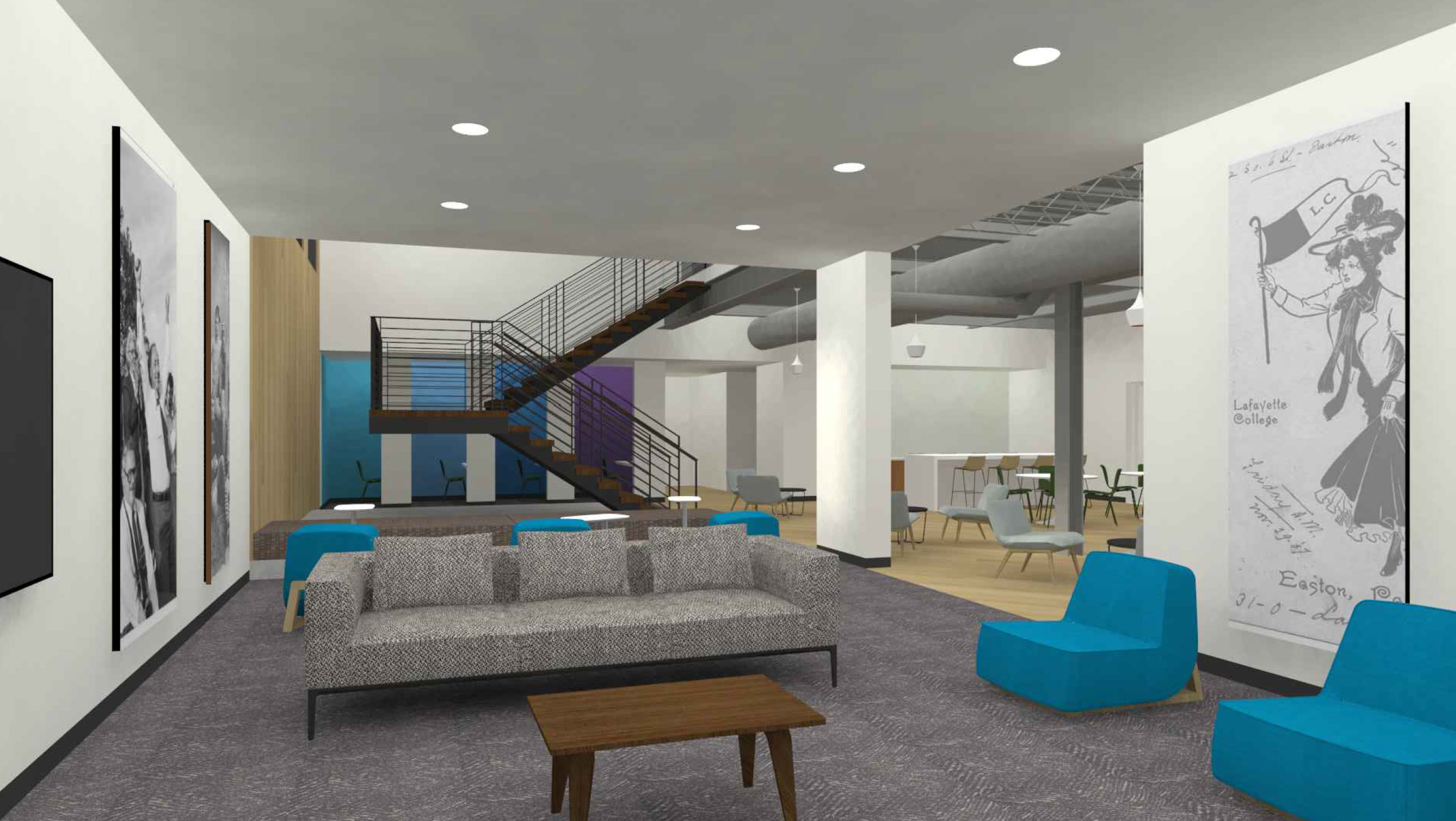 The transformation of the basement of South College into a community space will probably begin this summer. (Graphic courtesy of Meghan Madeira)

In response to student feedback, the college is planning to renovate several locations across campus to increase student access to community spaces. The renovation will include turning the basement of South College into a multi-use common area with pool tables, televisions and study areas, and an overhaul of Kunkel Hall.

Once the campus bookstore is moved out of Farinon as part of the ongoing expansion, a similar space will also be created where the bookstore used to be. In addition, incorporating community study spaces has been an important consideration in the construction of the Rockwell Integrated Science center, as well as the upcoming renovations to Kunkel Hall.

“The college is able to devote some resources to enhancing these spaces in a more significant way than we’ve been able to do in the past,” said Director of Residence Life Grace Reynolds. “We’ve always made updates and improvements over time, but this is…a big leap.”

The South College renovations are likely to take place over the summer, according to Vice President of Finance and Administration Roger Demareski. The area that is to become the community space was previously occupied by overflow storage from the library. Demareski said that, as more of the library’s records were digitized, the space became available for the project.

Part of the construction will involve making the area more accessible. Currently, the basement is only accessible from stairwells on either end of the building. Demareski said that the first floor lobby is going to be opened up and a stairwell put in for easier access to the basement amenities. The cost of the whole project, including design, furniture and construction, Demareski estimated to be between $800,000 and $900,000, which will come from the college’s operating budget.

A similar process will take place in the basement of Farinon as part of phase one of the ongoing expansion initiative. Currently, the details of this project are less clear than the South College project.

“When the bookstore moves out of Farinon we are looking to do something that supports students,” Demareski said. “We’re really focusing our principles on student support space.”

Reynolds noted that the Office of Residence Life has been holding focus groups to gather feedback from students on the projects, ranging from general student interest in community spaces to the minutiae of furniture selection for the South College common area.

The focus groups consisted of members of Student Government and Office of Residence Life Student Staff members, as well as other students who have “already been thinking…and hearing about [community spaces],” such as Commons Council members, Reynolds added.

“We did spend time talking about students wanting the ability to have some spaces where they could be in smaller groups, potentially study, or use that space for more group work,” she said. “As we’ve been talking about the residence halls, [we’ve thought] how do we support [students] by creating lounges that are more for study, better for studying in groups, that kind of thing.”

In addition to the changes in South College and Farinon, the college is also planning a major renovation of Kunkel Hall. The project, which will cost between $8 and $10 million according to Demareski, will likely begin construction this time next year. The money will come from the college’s next bond issue for $20 million.

The renovated building will include a new entryway with improved ADA accessibility, 36 offices, six classrooms, and a completely renovated amphitheater. Demareski noted that the provost is currently going through the process of determining who will be using the building after construction is finished. The biology department, currently housed in Kunkel, will be moving into the Rockwell Integrated Science Center.

Demareski said that the renovated Kunkel building will also offer ample communal space for students to use for studying.

“[This is] certainly an answer to students who say, ‘We want places to study that’s not in our rooms where we can be with a group or see and be seen in a quiet area,” he added. “[We are] trying to curate spaces that allow for socialization. We have other spaces, but not something of that size.”

As the school continues to grow in student body population, Reynolds noted the importance of continuing to create community spaces for students to study and socialize in.

“From a [Residence Life] standpoint, we know that you all are living and learning here,” she said. “It’s a residential college so…you don’t have a class here and a home there. Your living environment should support your learning in ways different from a traditional classroom.”