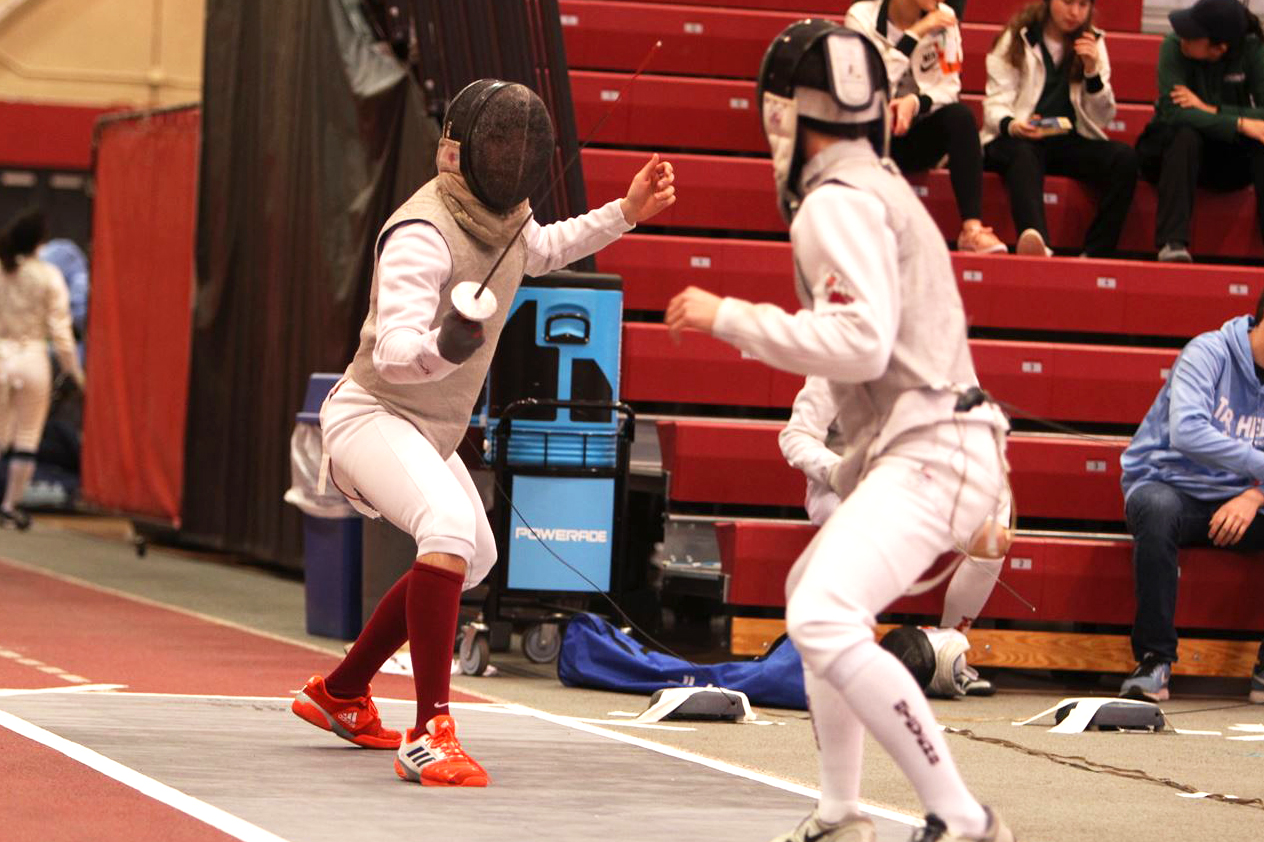 The Lafayette fencing team earned an eighth place finish in the Mid-Atlantic Collegiate Fencing Association (MACFA) Championship last Saturday, March 2, behind several strong performances from both the men and women on the team.

A sixth place finish by the saber trio of juniors Patrick Rekieta and Ian Miller, and freshman Carie Feigels was a highlight of the afternoon for the Leopards, as the three combined to win 25 of their 42 bouts. Miller won nine of his 14 matchups to finish 15th overall in saber.

For the foil team, freshman Yiwen Cui, sophomore Bora Mutis, and senior Andrew Mange won 17 of their 42 bouts to earn a ninth place finish. Mutis was the top individual performer for the Leopards, winning nine of 14 matches and finishing sixth overall in the foil competition.

On the épée side, the team of freshman Sean Fitzgibbon, senior Jackson Miller, and sophomore Juliana Sikorski tallied 12 wins out of 42 bouts on their way to a 13th place finish. Fitzgibbon and Miller accounted for 11 combined wins, while Sikorski won her lone match of the day.

“This past weekend was great, we had a lot of close bouts,” Sikorski said. “We had Bora Mutis and Patrick [Rekieta] make it to individuals so that was really exciting.”

With the end of the season fast approaching, 11 Leopards qualified for NCAA Mid-Atlantic Regionals, five from the men’s side and six from the women’s. For the men, Rekeita, Mutis, Cui, Mange, and Fitzgibbon earned spots for the weekend tournament. On the women’s side, Feigles and Sikorski will be joined by freshmen Viki Zay and Elise Hummel, both foil competitors, as well as freshman saber Bella Moger and freshman épée Lily Manetta.

In order to qualify for the regional tournament, athletes must compete in a minimum of 21 bouts, as well as achieve a 25 percent win-loss percentage in scheduled bouts, according to the NCAA fencing official website.

In preparation for the weekend’s competition, the team has been working on “fine tuning” their skills, according to Sikorski, during this week’s practices and lifting sessions.

Female fencers Sikorski and Feigels sometimes have to compete with the men, as they did last weekend, since Lafayette is a coed team. This presents unique challenges, as the playing styles are often more “aggressive” in male fencers, according to Sikorski.

“It definitely makes it more challenging,” she said. “But it’s a good experience to be able to apply fencing with guys to fencing with girls, and what you can learn from them.”

This weekends’ meet, however, will only feature male to male and female to female bouts.

For just the second time this season, and first since November, the Leopards will play in the confines of Kirby Sports Center.

“It’s really nice to be at home, we hope to have a lot of support from people in the Lafayette community,” Sikorski added. “It’s going to be a great opportunity to fence schools of a higher caliber and fence people who’ve gone to international tournaments and worlds and events like that.”

So many more would have qualified if literally ANY one else was coaching….. the administration really needs to replace Kolasa ASAP.