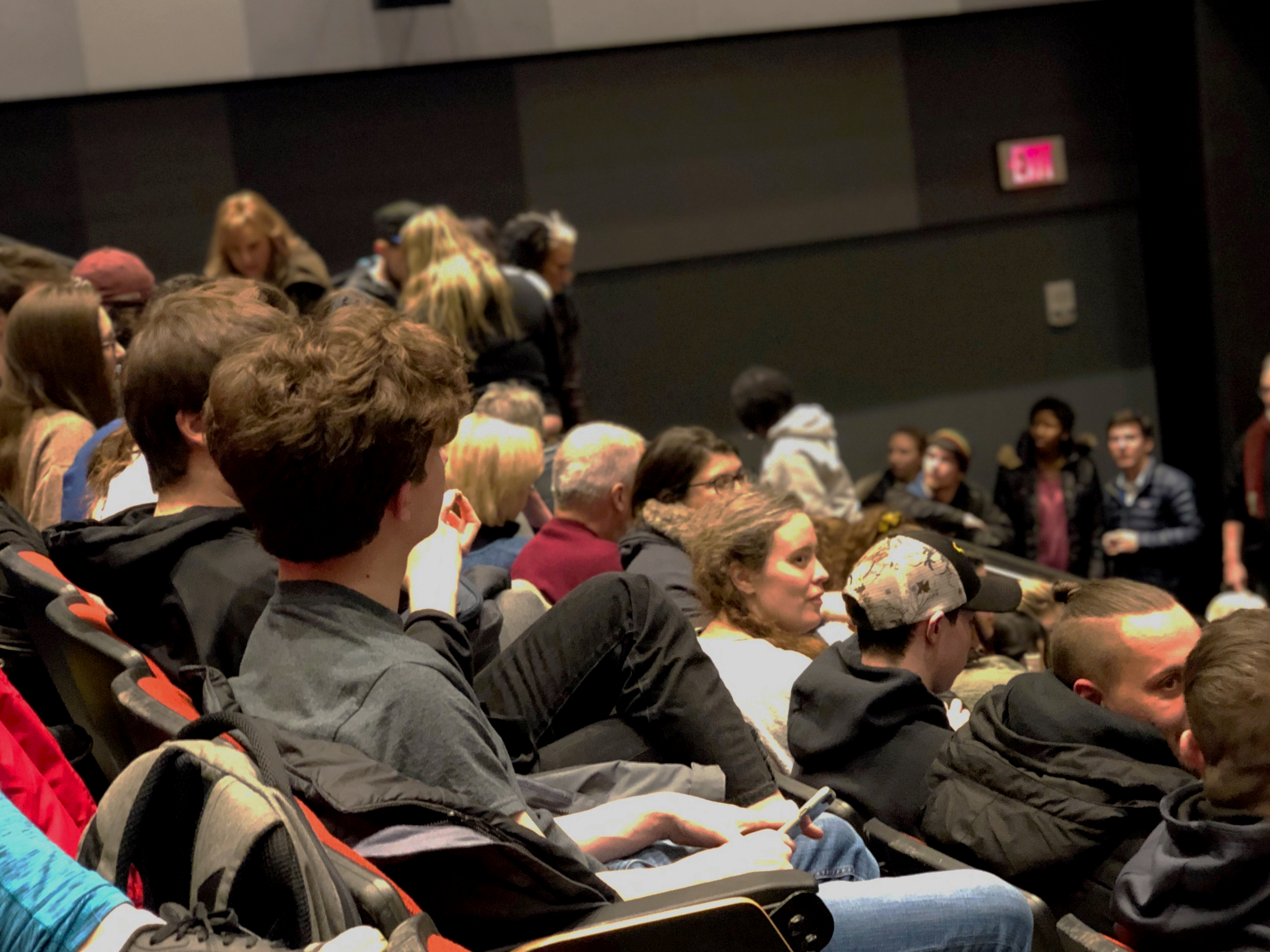 ‘Inside/Outside’ follows the stories of women who have experiences within the criminal justice system. (Photo by Mario Sanchez ’21)

Minutes before the documentary screening “Inside/Outside” by film and media studies professor Nandini Sikand, the 180-seat cinema at William C. Buck Hall was filled by the audience this past Tuesday, including Lafayette students, faculty members and Easton residents.

“I think especially with this film, it really is a community film,” Sikand said. “I mean, look at the turn out…I am so moved by that.”

The documentary, screened as part of Criminal Justice Reform and Awareness Week, followed various women who have ended up in the criminal justice system due to various reasons such as drugs, alcohol and violence, as well as systemic problems existing within the justice system, which perpetuate a cycle that women are forced to go back to.

Someone in the audience asked Sikand what the hardest part of making the film was and in her answer she explained that one of her biggest worries was not being able to do “justice to their stories,” adding that she wanted to make sure she didn’t sensationalize their stories nor be offensive in her approach.

Ashley Biasi and Savannah Bertha were amongst the many women that appeared in the documentary to account their experiences in the criminal justice system in Northampton County Prison. After the film came to a conclusion, Biasi and Bertha stayed for a Q&A section along with Sikand.

The probation and parole law is part of the “vicious cycle,” as Sikand put it. The cycle is also known as recidivism, which is “a tendency to relapse into a previous condition or mode of behavior, especially…into criminal behavior,” according to Merriam-Webster Dictionary.

“Probation and Parole are supervisory alternatives to incarceration,” as stated by the Lento Law Firm Criminal Defense. Probation typically requires people previously incarcerated to maintain a valid address, staying within state bounds, drug testing and attending rehabilitation programs upon release. Thus, violation of probation terms includes “starting the probation period from the beginning, or a denial of probation and placement into incarceration,” according to the Lento Law Firm, which practices criminal defense in Northampton County.

After an audience member asked where there needs to be a change between the community in which the women live and the criminal system, Biasi answered that the Probation and Parole system is flawed because “they penalize you for your crime, but then expect you to go above and beyond in order to get out of trouble and then you end up getting in more” [trouble] for not being able to fulfill the requirements set.

Sikand added to Biasi’s response and said that as shown in the film, once the women pay their “dues,” they are released and need to start over. Later she added in an email that “there are many factors including a lack of jobs, housing, mental health, lack of support and substance use disorders that are criminalized rather than treated as a health issue,” which make it difficult for women to re-enter their lives outside of prison.

Bertha and Biasi agreed that having a support system after being released from prison is pivotal in order to succeed.

“I was very lucky…my family is very supportive…They’re all very supportive from day one, which I think has a lot to do with my success,” Biasi said. “When you feel shunned and you feel like you don’t have anybody…it’s so easy to fall back into the wrong ways…you need that support.”

Bertha followed that by saying she is “really lucky that I have great-grandparents, and I think that having a good support system when you get out is [crucial] because If I didn’t have them I really wouldn’t know what to do.”

Sikand wrote in an email that she hopes that “[‘Inside/Outside’] models solidarity and alliance building within the community, and adds to the conversation around criminal justice.”
Bonnie Winfield, former Director of the Lafayette Landis Community Outreach Center, has worked with hundreds of women through The Journey Home in the Criminal Justice System in the Northampton County Prison. The Journey Home is “an expressive art-based program for women in the Northampton County Correction,” according to their website. “The Programming integrates trauma-informed care, restorative practices with expressive arts.”

Winfield said that once people in prison come out, the community needs to show “love” and “welcome them because they’re amazing.”

“If we show that support they can make it. Just think about coming out and just being by yourself, walking out the door and no one picks you up. And that happens a lot, no one is there.”

After the screening and Q&A section, printed versions of the art works by the women Winfield worked with were being sold in various forms, such as journals and framed photos.

Winfield said that at first, the women would not be secure in their artistic skills, so “then we had these agreements that you can’t say you’re not an artist when you walk in the room,” adding that she would take them through activities to prompt them to “just be creative.”

When doing art Winfield explained the importance of silence in order to “help them be mindful” and “heal [their] traumas.” She added that twenty years ago,” making art and doing these kind of things saved my life, I was in a very bad place and so I like sharing that with other people and that’s why I do it.”

Each art piece is a collaboration between several women by using art journals and going off of each other’s personal style. Winfield said that “there is something about being Inside…that makes things more real, and I really don’t know why that it, but it is. And people are more authentic, at least the ones in the group.”

Bertha said she remembers making art Inside was “great” because “we [didn’t] think about what’s going on, our outside life, our problems that we don’t have control over so it was good.”

Later in an email, Winfield explained that she prefers to use the term “Inside” when referring to incarcerated women because “there is a lot of baggage and [judgement] with the prison terms so it is more neutral especially when I involve students,” adding that when she has a class with Lafayette students, she refers to those students as Outside students.

The original art pieces by the women will be exhibited today at Portlock Black Cultural Center from 3:00 p.m. to 5:00 p.m.