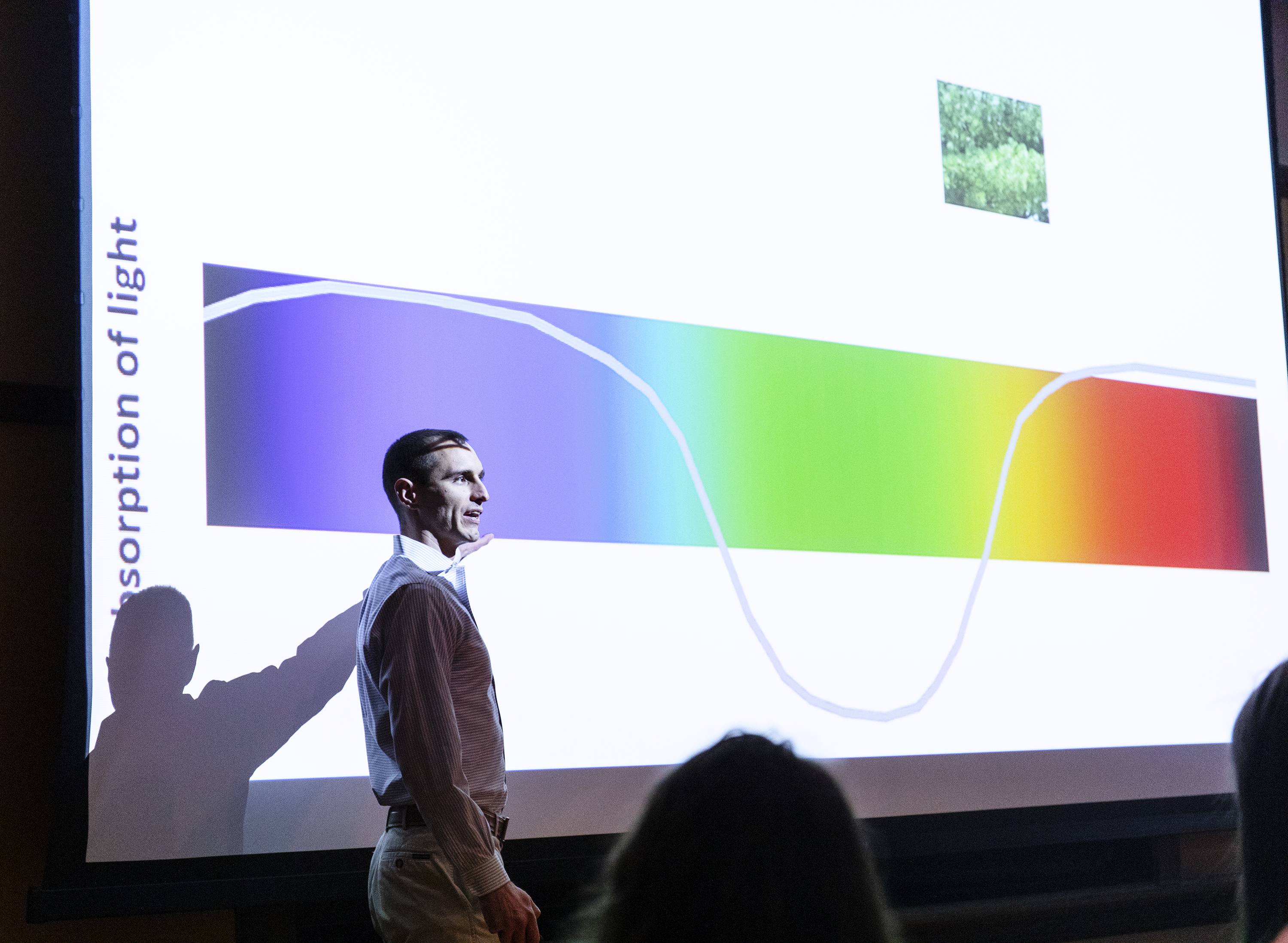 Biology professor Michael Butler discussed the garish animal world of his research in the Jones Faculty Lecture on Wednesday. (Photo by Elle Cox ’21)

“Green is in the eye of the beholder,” quipped biology professor Michael Butler, before going on to explain the true nature of color as a spectrum of photons.

Butler celebrated gaining tenure by giving a lecture on one of his areas of research: color in the animal kingdom. The talk, “Colorful Animals in a Challenging World,” was well attended by faculty and students alike, with not a single seat remaining empty in a packed lecture room in Kirby Hall. The lecture was part of the ongoing Jones Lecture Series hosted by the Office of the Provost.

Before Butler joined Lafayette College in 2012, he attended Bowdoin College as an undergraduate, graduating with a B.A. in Biology and Physics. Butler then took time off to help children with autism, prior to receiving his Ph.D. in Biology from Arizona State University.

In addition to the research he does in “organismal biology from physiological, evolutionary and ecological perspectives,” according to his website. Butler currently teaches Human Physiology, Physiology of Extreme Animals and General Biology 102 at Lafayette.

The lecture started off with the classic colorful member of the animal kingdom: the peacock, which served to indicate coming motifs including coloration themes, how colors in animals came to be and why they’re so interesting.

Butler said that humans have three types of cones that absorb different wavelengths of lights. These can be mapped out into space to demonstrate what colors we see.

Butler noted that, amazingly, organisms that see in ultraviolet can see colors humans can’t even comprehend.

“There is information there, we’re just not accessing it. It’s not part of how we sense the world,” he explained. “Ultraviolet isn’t ‘awesome purple.’ It’s a totally different color. The color experience is far richer and definitely different from what you or I have.”

Butler also described the way in which animals are able to produce their vibrant coloration. The obvious answer, pigment-based coloration often sourced from an animal’s diet, is certainly a factor for some birds. Many other birds rely upon a factor known as structural coloration, he said, with blue color in birds being a prime example in which there’s no pigment.

He also described a concept called iridescence, which causes birds to appear with completely different hues as the viewing angle is changed.

The elaborate and vibrant colors do come at a price, Butler explained, sometimes including maintenance costs, social costs and production costs.

Butler said that from an evolutionary perspective, “only the highest quality individuals can afford these costs.”

In fact, Butler’s dissertation question pertained to these costs associated with coloration.

Butler concluded by mentioning some of his research projects with birds. His field site at the 80-acre Metzgar Fields Athletic Complex contains 83 nest boxes, home to various adult birds. This colony of nests is in place to “examine how nutrition of parents and nestlings affects coloration of adult birds, nestlings and even eggs.”

Butler had several replica eggs 3-D printed to determine what about an egg identifies it to a bird. He learned that, more often than not, the females tested did not throw out the fake egg. He explained that, in Europe, cuckoos have developed a similar evolutionary strategy, to the extent that they never build their own nests, preferring to con another eager parent into assuming the job.

Following the lecture, Butler thanked his family for their support and Lafayette College for all the friendships he’s gained, before fielding questions from the audience pertaining to animal intelligence, the colors which are forever hidden from us and dinosaurs. The lecture was also succeeded by a brief reception in the lobby of Kirby Hall.