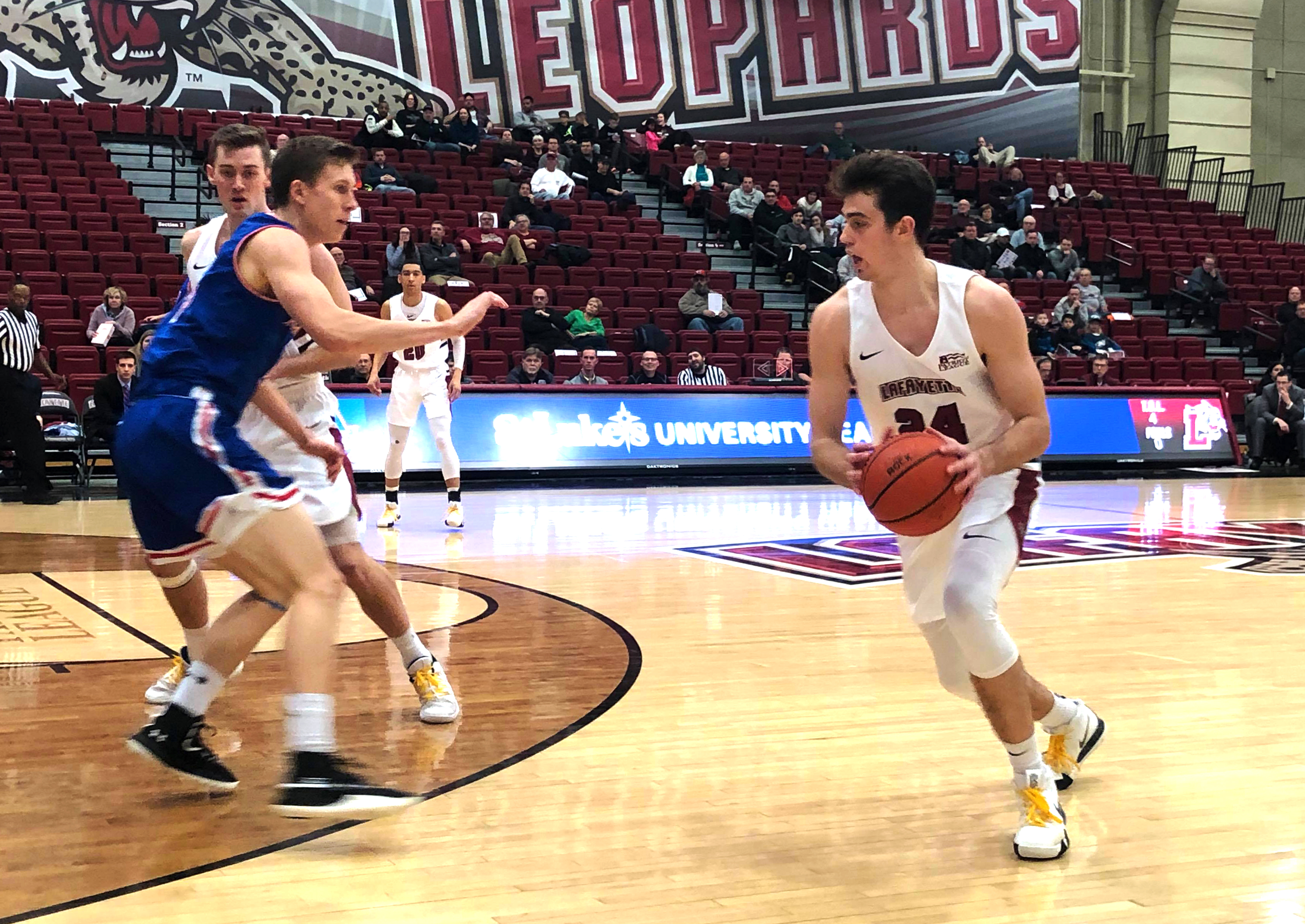 The men’s basketball team extended their season-best winning streak to five games with wins over Loyola and American last week. The Leopards beat the Greyhounds last Sunday, 69-64, and then won again against the Clawed Eagles on Wednesday in a thriller, 70-68.

In the American game, the Leopards clawed their way back from a six point halftime deficit and took the lead down the stretch thanks to some late heroics from sophomore guard Alex Petrie, who finished with 14 points and five rebounds. Petrie hit a jumper to narrow the deficit to three points, and then converted a layup plus a foul and hit the free throw to tie the game at 68 with less than a minute left in the game. Junior forward Myles Cherry also contributed, returning from a lengthy absence.

Petrie’s acrobatic, driving layup with three seconds left sealed the win for the Leopards, bringing the team’s record to 7-8 in the Patriot League and 10-16 overall.

Senior co-captain Paulius Zalys became the program’s 45th 1000-point scorer on a milestone night for him. Zalys finished with a team-best 19 points and added two rebounds and an assist. Sophomore guard Justin Jaworski tallied 13 points and five assists, while junior forward Lukas Jarrett stuffed the stat sheet with 11 points, four rebounds, and a pair of assists and blocks.

In the Loyola game, a strong offensive first half was negated by a late run by the Greyhounds, and the score was tied at 61-61 with only two minutes remaining in the fourth quarter. Lafayette led 40-34 at halftime after shooting a scorching 58 percent from the field before the break.

The team was able to “hit big shots at big moments,” according to head coach Fred O’Hanlon. Jaworski had one of these key shots with only 1:16 remaining in the game. He hit a three and drew a foul in a huge four point swing for the Leopards to put the team up 65-61. Jaworski had a strong shooting night with 18 points, and added six rebounds and five assists. Zalys and Petrie were also strong on offense with 10 and 16 points, respectively.

O’Hanlon highlighted the drive of the team in the final minutes of the game as a positive takeaway moving forward.

“It is always difficult to win on the road,” he said. “I thought we showed great resilience when we lost the lead toward the end of the game and were still able to get the momentum back.”

The team had not won four consecutive games since the 2014-15 season, the same year that the Leopards were named Patriot League champions, four years ago. The team also committed a season-high 22 turnovers, but freshman forward Sean Good shed some positive light on the statistic.

“The turnovers showed resilience and strength in the team because we made up for it in other parts of the court and came out with the win despite it,” Good said.

O’Hanlon agreed with Sean’s observation of the unity of the team.

“A real positive and reason for winning is how scrappy we were as a unit. We played very hard and outrebounded them. We hit big shots at key moments.”

As the team inches closer to the end of the season with just three regular season games remaining, the group will continue to play to their strengths and focus on the little things, Good said.

“There’s little room for error at this stage in the game,” Good said. “We’ll continue doing what has made us successful: high ball movement and a strong defense.”

Next up for the Leopards is a trip to Bucknell University to take on the Bison on Saturday with tipoff scheduled for 2 p.m.