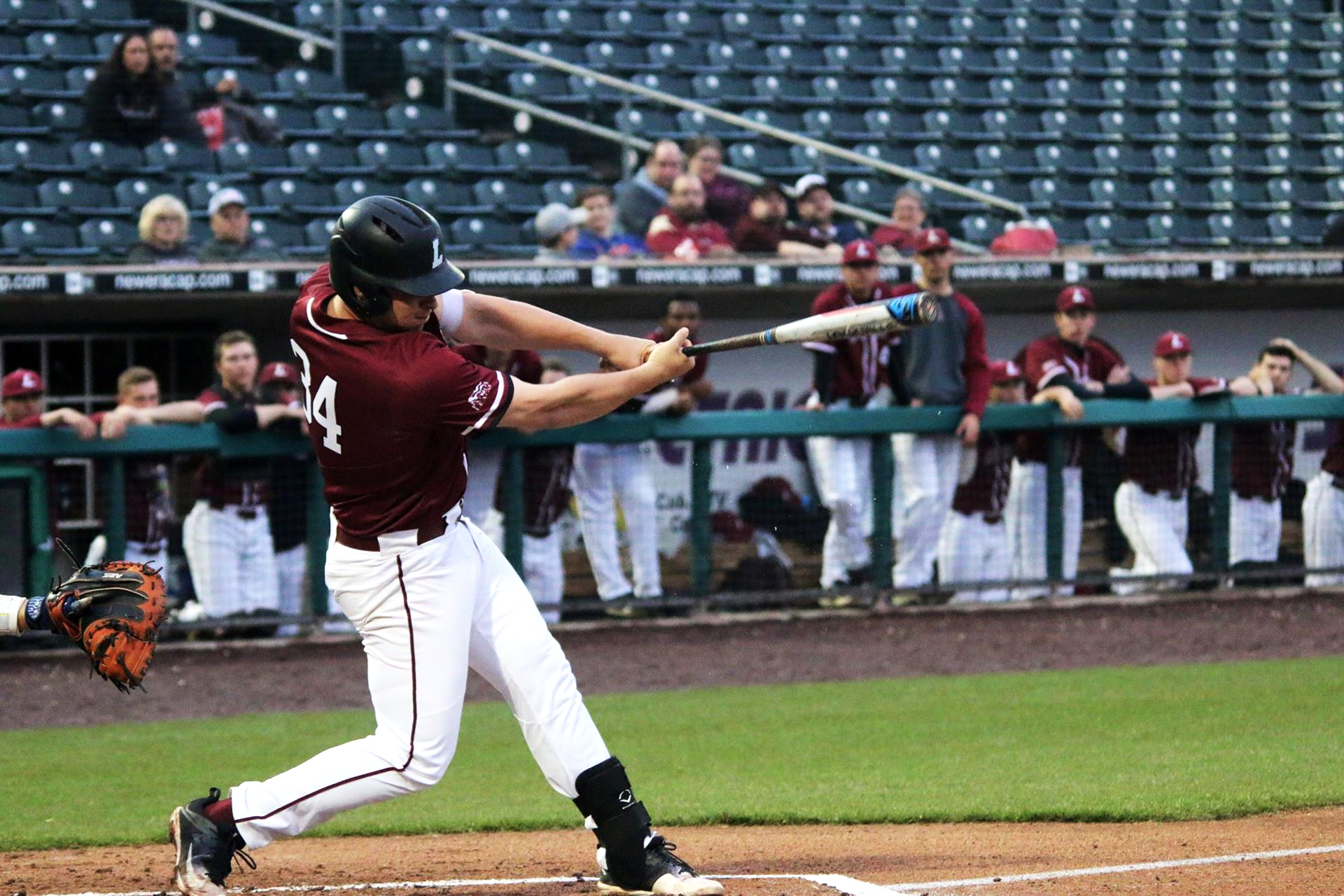 Senior first baseman Richard Villa had two hits in the final game of the weekend series. (Photo courtesy of Athletic Communications)
The Lafayette baseball team’s 150th anniversary season is underway after a trip to Elon University this past weekend. It’s off to a slow start as the Leopards fell in all three games of the series to an Elon team that is expected to compete at the top of their conference this season, according to the 2019 preseason poll which picked the Phoenix to win the CAA title.
“Elon is definitely a good team, but we showed that we were right there with them for the majority of the weekend,” said senior outfielder Dan Leckie.
In the season opener on Friday afternoon, the Leopards lost 9-1 and had trouble manufacturing hits to kickstart the offense. Leckie got the team’s only hit in the first game in which they committed five errors. The next two games had more positives for Lafayette.
The team lost 8-0 on Saturday, but the Leopards kept the game close for most of the contest and were down just 1-0 after five innings, thanks to a strong outing by junior left-handed pitcher Mark Anderson. The southpaw scattered three hits in four innings and recorded four strikeouts.
In the final game of the road trip, another junior left-handed pitcher, Brett Kreyer, put together a strong performance on the mound. Kreyer threw four solid innings but got into trouble in the fifth and sixth innings, allowing four total runs on seven hits in the game. Lafayette saw some better production from the middle of the lineup, as junior outfielder Trey Durrah and senior first baseman Richard Villa each had two hits. Senior right handed pitcher David Giusti pitched three strong innings in relief, allowing one run and striking out three.
Despite the tough start, there seems to be a bigger meaning to this season than just wins and losses for this Lafayette squad. The 150th anniversary season has created energy and respect from the coaches down to the players.
“It’s an honor to be a part of something that has been around for such a long time,” said head coach Joe Kinney. “It humbles me as a coach to say I am apart of that.”
Kinney noted that the support for the program has been especially strong during such a special anniversary for the team.
“The baseball alumni have been tremendous in their financial generosity to help us with facilities, to help us with travel, to help us with staffing, to help us with recruiting and to help us with equipment,” Kinney said. “But it is a lot more than that, as the alumni give back to the school with their time, through coming back to campus and speaking to our students about their experiences as a student and now what they are doing in life.”
Leckie echoed those remarks, and explained how former players continue to give back to the team however they are able.
“Personally, it’s looking back on the guys that have come before us and how they still support our program. We have a great alumni connection,” Leckie said. “They do a lot for us, from donations to throwing us a career night every year in New York City.”
“We have to pay tribute to them while continuing to move forward and hope to make it better than we found it,” Leckie added.
Kinney also highlighted the team’s alumni career night as an incredible experience for his players and a great opportunity for other alumni to come back and connect with the team. This event is a great representation of how influential Lafayette baseball’s history is on today’s players.
“When I think of 150 years of Lafayette baseball, I think of tradition and respecting that tradition,” said sophomore infielder Ethan Stern. “The fact is that when I put on that Lafayette baseball jersey, I know that I am making 150 years of Lafayette baseball alumni proud.”
A major feature of the 150th anniversary has been assistant coach Andrew Dickson’s commemoration of the program through the team’s Instagram page. Each day since last Nov. 19, 150 days before the baseball team’s rivalry game against Lehigh, Dickson has been posting unique facts about the baseball program.
“We have grown our followers each day, getting more and more traction on this anniversary,” Dickson said. “We have even had a lot of recruits reach out to us and say that they’ve seen this. It’s helping us get Lafayette baseball out there even more.”
In addition to the ongoing Instagram campaign, the team received special throwback uniforms to wear during some home games this spring. The uniforms honor the previous generations of Lafayette baseball, and continue the trend of throwback uniforms across major sports.
“There are a couple that haven’t even come out yet that I really like,” he said. “But the last one I think is going to be my favorite so stay tuned.”
“Coach Dickson did a lot, as well as my equipment staff, sports and information staff, are communications office, and our copy center all did a lot in this collaborative effort,” Kinney said. “As an employee, it makes you proud to work with people that are this supportive of unique projects.”
“It is a testament to what Lafayette is all about,” he added.
This weekend the Leopards travel to Harrisonburg, Va., to take on James Madison University for another three game weekend set. The team hopes to rebound and potentially win the series while representing well the 150 years of baseball alumni that have created such a special program.