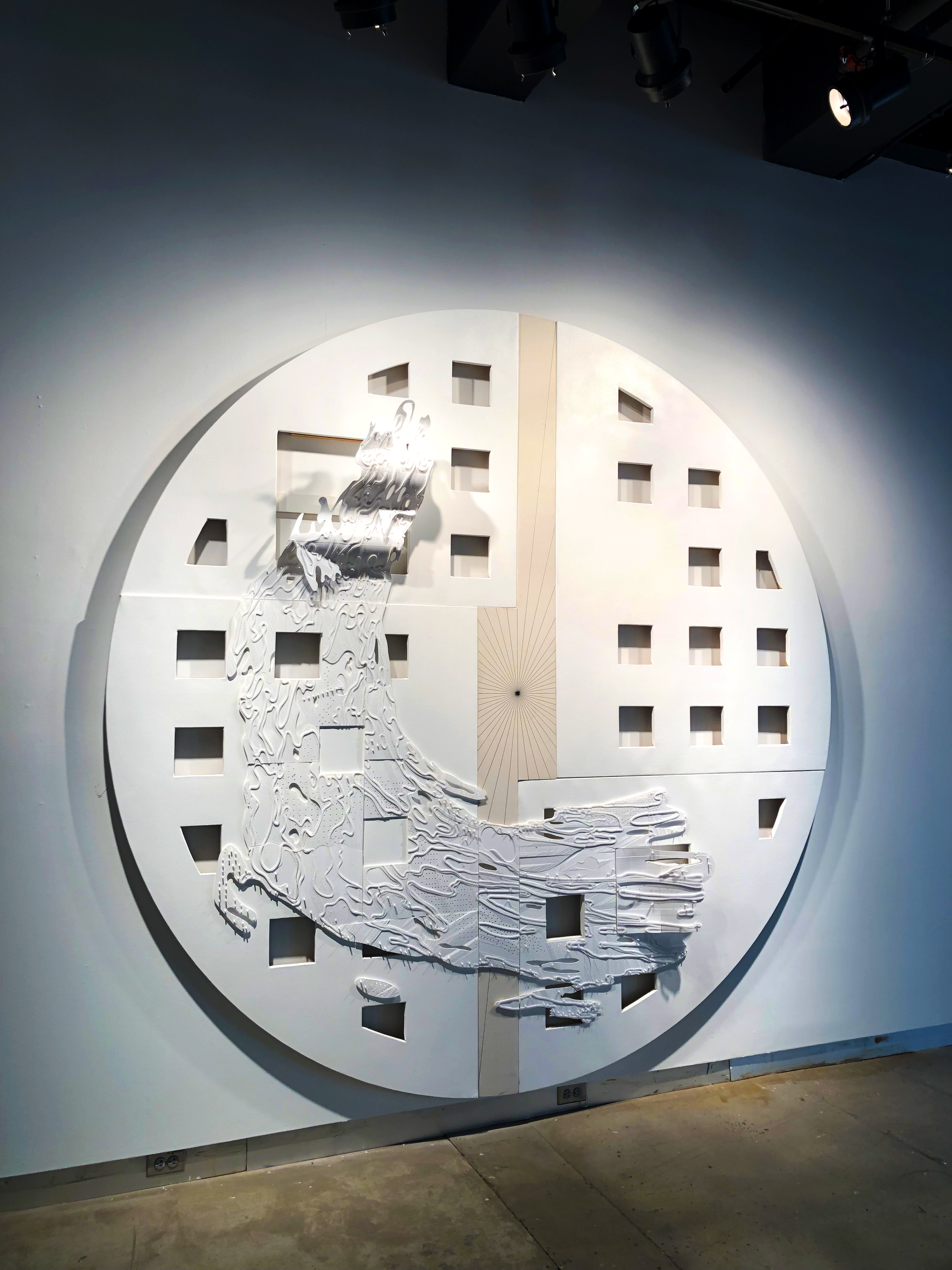 Pedro Barbeito has most recently been working in the realm of 3D printing. (Photo by Morgan Sturm ’19)

Pedro Barbeito is inspired by “just looking” at things that fascinate him. Barbeito, an art professor and the director of Lafayette’s Experimental Printmaking Institute, is currently showcasing a collection of his work in the Grossman Gallery at the Williams Visual Arts Building. The exhibit showcases works spanning an over 20-year period of Barbeito’s career.

“These are works that have remained with me, or in other words, that were not sold or that I’ve kept for sentimental reasons,” he added. While Barbeito has moved homes approximately 12 times over the past 20 years, especially while living in New York City, he brought these pieces with him each time, he said.

The pieces on display pull from three of the five different series of paintings that Barbeito has worked on throughout his career. While most of the pieces are from his Science/Astronomy series, there is also a piece included from his Pop Violence series and one from his series centered around digital landscaping.

The collection also includes the piece that “began” Barbeito’s career, he said. The painting titled “Simulated Cloud Volume in Space and Time” (1997) was the first painting Barbeito exhibited in New York City and the first of his paintings to get significant attention from dealers and critics, he said.

Barbeito’s work is largely inspired by science and technology, which he integrates into his pieces. According to Barbeito, his father was a geologist, and this contributed to his interest in science. Digital imaging, however, was his main fascination.

“The technology was something that I just could not ignore in the mid-90’s, it was something that just struck hard. Billboards were going up in New York City that were digitally printed instead of hand painted, visual culture was changing, I was able to go online. The worldwide web came into my lexicon…back in the 90’s,” he said.

For example, in one of Barbeito’s pieces on display, “Fighting Yank” (2007), he integrated violent video game imagery with violent comic book imagery and the news media from the time of the War in Iraq, during which violent imagery was “being sent to us on the Internet,” he said.

While attending graduate school at the Yale School of Arts, Barbeito took a 2D and 3D software course offered by the architecture department, which furthered his interest in digital imaging, he said. As an undergraduate, Barbeito originally wanted to go into architecture and later changed to an art major, he said.

Barbeito’s current pieces include work with 3D printing, which he said he began doing in the late 1990’s. Since 3D printers were less affordable at the time, Barbeito would send files out to be printed, he said. When 3D printers became more affordable around five years ago, he began buying printers.

“I love the hand painted and using physical paint, but then there’s something about [3D] that for now has me really engaged. I’ll probably go back to integrating more handmade gestures, but for now I’m definitely invested [in it],” he said.

Although Barbeito said that 3D printing is often too timely to integrate into courses, he does use other technologies, such as laser cutting, when teaching his courses at Lafayette. According to Barbeito, he also encourages his students to use the things they see for inspiration.

“That’s something that I promote in my classes when students come in and are thinking they’re going to have to draw everything,” he said. “[I tell them], ‘No, use your phones, use your computers, Google stuff, look for things that are fascinating and visually engaging.'”

According to Barbeito, he hopes gallery visitors will “be inspired” by the exhibit.

“I think the role of art in general is to have us ask questions…and the other thing is that I’m trying to make beautiful things…so there’s beauty hopefully here, but there’s also curiosity,” he said.

Barbeito’s exhibit “Paintings 1996-2018” will be on display in the Grossman Gallery until April 13.