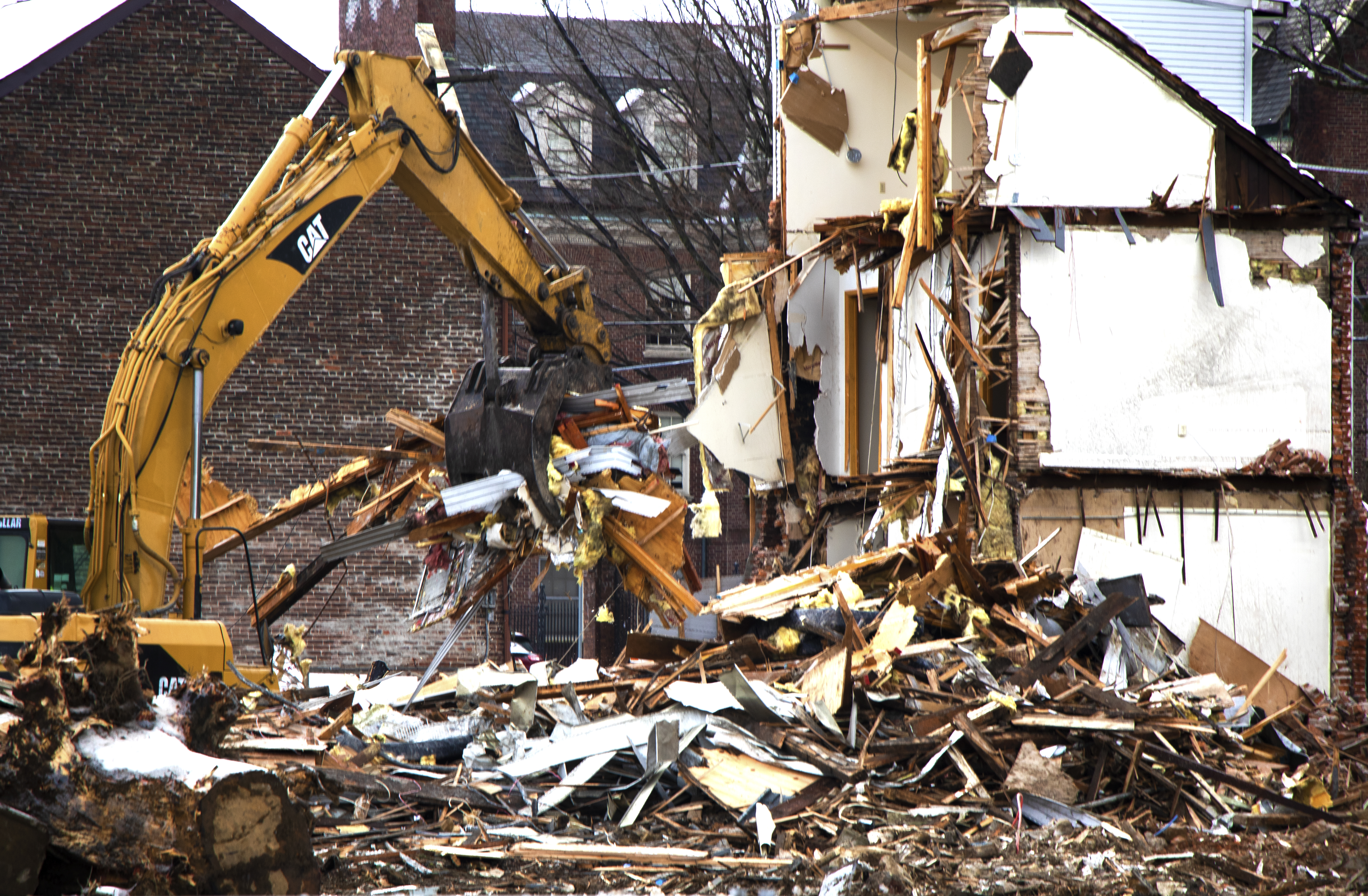 Prior to the demolition this week, all items of value were removed from the houses, including some of the outside brick, trim and staircase railings, according to Vice President of Finance and Administration Roger Demareski. The college plans to auction off these items and donate the proceeds to the Easton Area Community Center.

The construction is part of a broader expansion plan called the Affordability and Expansion Through Growth initiative. The initiative, which was adopted by the Board of Trustees in Feb. 2016, is an effort to increase the budget for need-based financial aid and faculty salaries.

In addition to the construction on McCartney Street and the Rockwell Integrated Science Center, there are other, less visible parts of the plan detailed in the college’s 10-year strategic direction. In addition to admitting more students to raise revenue, the college has been engaged in ongoing fundraising efforts. The school also plans to hire 40 new faculty members by 2027.

Second, one percent of the yearly tuition increase over the next ten years will automatically go to financial aid. Finally, fundraising done by the college contributes to the financial aid budget.

“The affordability won’t come just from growth, or just from fundraising,” Demareski explain. “It has to come from all those things.”

One of the goals of increasing the budget is to raise the financial need rate to 48 percent by 2027. According to Vice President of Enrollment Greg MacDonald, the current financial aid rate across all four classes is about 38 percent. MacDonald said that achieving the goal of 48 percent would allow the school’s admission process to become “need blind.”

MacDonald did not elaborate on what the “financial need rate” represents.

Need blindness would allow prospective students to come to Lafayette “without regard to their ability to pay the cost of attendance.” Currently, financial need is a factor of consideration in the admission process at the college.

While need-blindness is an important step in increasing access to higher education for lower income students, disparate access to resources like college counselors, standardized testing preparation classes and accelerated coursework in high school still puts lower income students at a disadvantage in the applicant pool. In addition, MacDonald wrote in an email that the school will “likely still need to employ some level of need sensitivity” when assessing applications from international students.

MacDonald noted that the school has some mechanisms in place to address these concerns.

“The college is actively building relationships and partnerships with community based organizations and college access organizations in ways that are fundamentally transforming our applicant pool,” MacDonald wrote.

Although the school will be increasing the student body size by about 400 students as part of the initiative, MacDonald noted that this will not decrease selectivity in the admission process. In fact, the applicant pool is “growing faster than the enrollment growth,” meaning a lower percentage of applications will be accepted in coming years.

As part of the initiative, the school also plans to continue the 4 percent yearly tuition increase. Both Byerly and Demareski noted that the tuition increase is mutable and changes each year based on a variety of factors.

“What we have is a financial model which has [the 4 percent yearly tuition increase] built in as an assumption at this point,” Byerly said. “That doesn’t mean that it doesn’t get reconsidered, refigured and voted on by the board on a yearly basis.”

“We projected and modeled tuition increase over the ten years [and] modeled out the major expenses like salary increases,” said Demareski. “Each year we look at it and make adjustments based on economic forecast, input from enrollment, those kinds of things.”

Byerly also noted that it was unlikely for tuition to go back down after the plan’s completion, but that the school may reach a “steady state” in which tuition increases “may level off a bit.”

One concern for the initiative is the paradoxical notion of increasing tuition to fund the financial need budget—a process which could, if not balanced correctly, have the opposite of the intended effect.

Byerly said that this fact is a key consideration when the school is planning the yearly budget.

Another key aspect of the initiative that relies on the tuition increase for much of its funding is the college’s plan to add 40 new faculty members. The school aims to offer more competitive salaries, especially for assistant and associate professors. The college is more likely to be competing with other schools to fill these positions, as tenured faculty positions are often filled internally.

“We felt we were pretty competitive with full professor tenured faculty,” said Demareski. “The area that we were weakest was the assistant professor or associate professor.”

Lafayette benchmarks its salaries against the so-called “group of 25,” a collection of 25 colleges that the college uses to compare faculty salaries. According to Demareski, the college intends to be at the “midpoint.”

Demareski also noted that the faculty will be distributed within the different departments based on the curriculum and student demand, and that the provost and the current faculty will ultimately decide what positions need to be filled.

Though there have been some delays in the initiative, including community push-back to the initial expansion plans and overcrowding in dining halls, Demareski says that the initiative is headed in the right direction.

“We’ve had to limp through a few things, make a few adjustments, [like] adding an additional server in Marquis, but knowing these things are coming, there is a permanent fix,” he said. “I think the challenge is that, in the moment, if you’re a student and you’re waiting in line, the permanent fix feels a long way away. So the more people can raise issues we can try to make adjustments in the meantime.”

“To get there takes a lot of patience. Where we can soften things, we’re trying to do that,” he added.