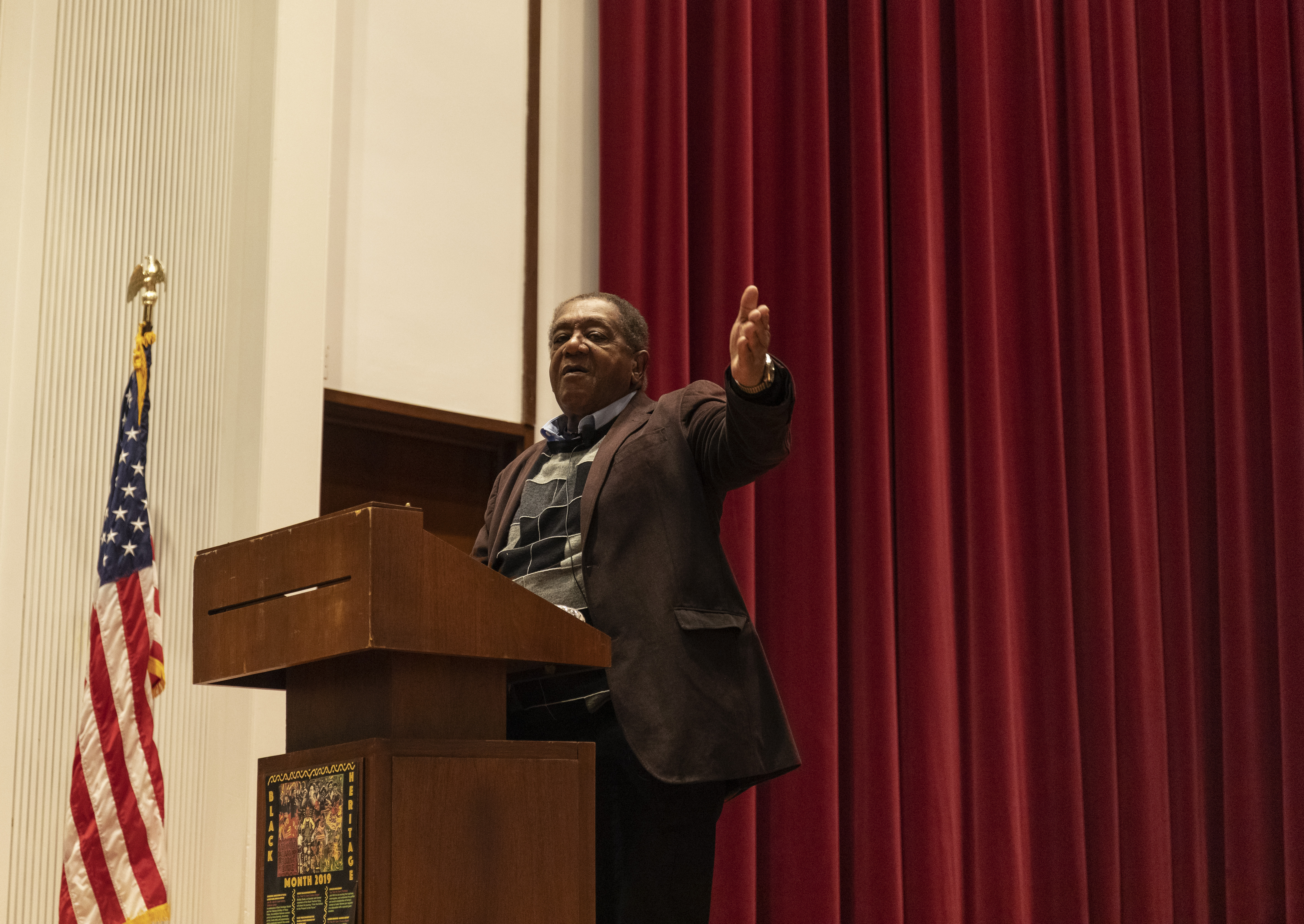 Co-founder of the Black Panther Party Bobby Seale spoke on the development of his activism on Tuesday. (Photo by Elle Cox ’21)

When Bobby Seale heard a group of students chanting “black power,” outside his home in Oakland, Calif., he walked out of his home to talk to these students. He stated that in order for them to get the “black power” they are fighting for, they needed to take over city council seats.

“This is the basis and reason I started the Black Panther Party,” Bobby Seale said to those gathered in Colton Chapel. “We have to have some political unity, and ultimately we want to elect people to office, so we can get that political power.”

Seale, political activist, co-founder and former national chairman of the Black Panther Party for Self-Defense spoke at Lafayette this past Tuesday as the keynote speaker for Black Heritage Month 2019.

Seale recounted his life before founding the Black Panthers, his inspirations and future activism for students.

Seale reflected on his life before entering politics. Prior to founding the Black Panthers, Seale was an engineering design major at Merritt College and an engineer for NASA working on the Gemini Missile Program.

“I [was] at the high-tech peak of my evolved skill and trade,” Seale explained. During this time Seale was also reading African American history, specifically rebellions in slavery and W.E.B. Du Bois’s book, “Black Reconstruction in America.”

Seale was both shocked and impressed to learn this history.

“You have to understand [this history] to understand the struggle for constitutional democratic civil human rights today,” he said.

“I was one person being totally inspired by Dr. King,” Seale said. “That lead to me quitting my job creating the youth job program in North Richmond, Calif., in 1964. This is the stuff that would seed the Black Panther Party.”

Seale left his job and moved to Oakland, Calif.. He reflected on becoming more invested in political activism, while teaching grassroots community organizing.

“That was my idea, that was my thing, that was my perspective,” Seale said. “That was me dreaming about the possibility of doing this, so we started the Black Panther Party as a means…to capture the imaginations of the people.”

Seale brought citizens together and registered them to vote. He decreased the number of unregistered voters to form “a political machine and take over city council seats.”

“We will observe you whether you like it or not,” Seale told the officers. “I knew the law. I knew this stuff.”

For Black History month, Seale is speaking at colleges across the nation. He explained on the importance of activism today, stating that the greatest issue humanity is currently facing is global warming.

“Climate change…it’s on a worldwide basis, it’s our whole earth, it’s our home, it’s our oxygen…you cannot let the corporate, money rich, run our politicians,” Seale said. “You got to get all these progressive programs together. This is what has got to happen.”

In his closing words, Seale explained what he wants to leave students with when he speaks to them.

“Get your education, you need your education,” Seale said. “We are pulling humanity together, whether you’re black, white, blue, red, green, yellow, or polka dot, get down to the nitty gritty…this is what we got to do…it’s going to take all of us to pull it together in every shape, way, fashion and form.”

Seale finished with adding the importance of his own activism work over the years.

“Teaching people grassroots community organizing so we can take over more political seats and be able to change things, this is what it was all about. It’s about you, me, us, our whole humanity on the face of this earth.”

Seale said goodnight to a standing ovation with the words of the Black Panthers political slogan, “Power to the People.”