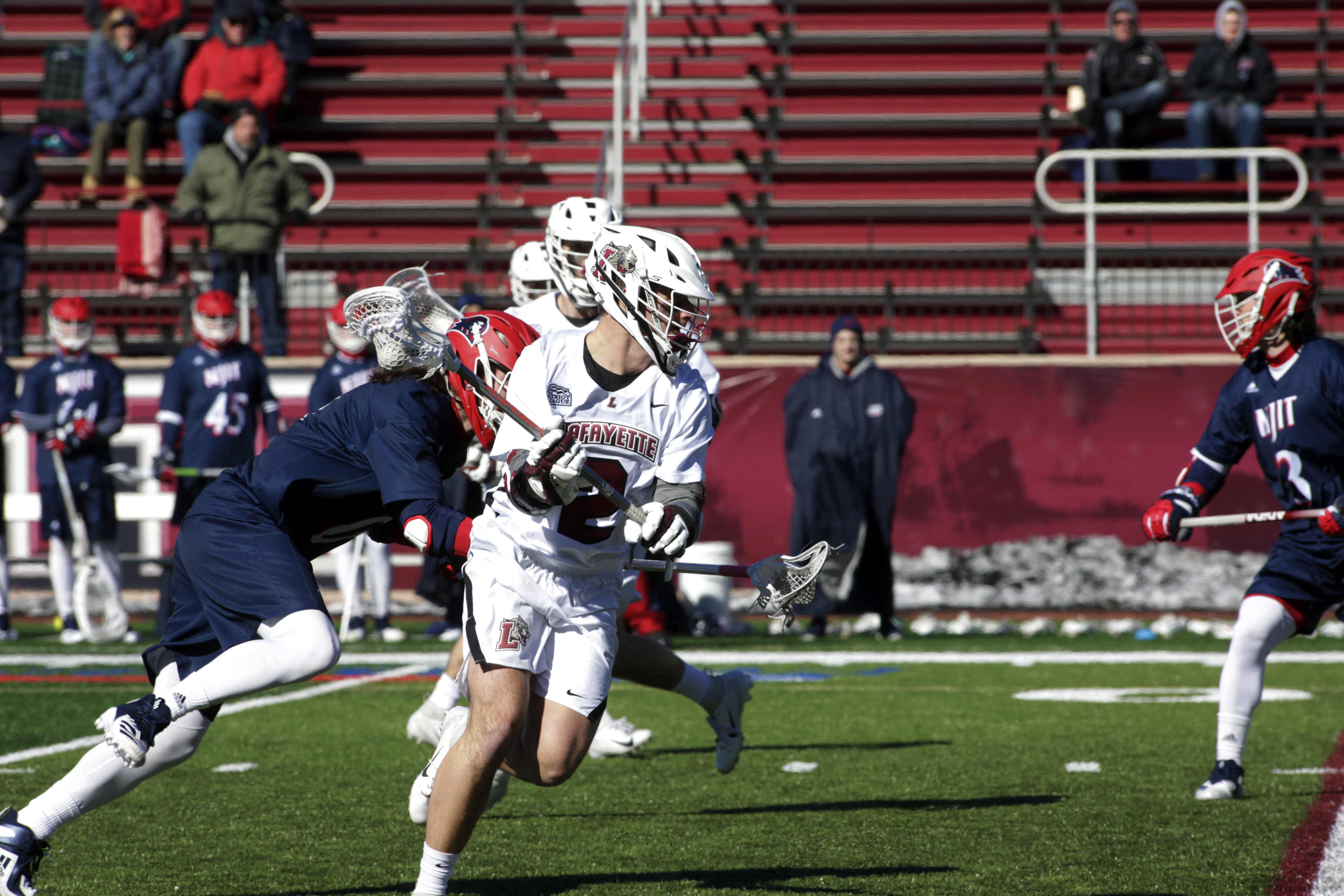 The Lafayette men’s lacrosse team used a late first quarter surge to power their way to a 14-10 win over the New Jersey Institute of Technology (NJIT) at Fisher Stadium on Saturday, Feb. 9. It was a full team effort for the Leopards as five different players scored goals, paced by senior midfielder Connar Dehnert who found the back of the net five times. Freshman midfielder Cole Dutton, who scored once in the season opener against Rutgers, recorded a hat trick in the second game of his college career.

“I’m just proud of the progress our team has made in the last four weeks and really over the past five months,” said head coach Pat Myers. “We recognize that winning is simply a bi-product of coming ready to work hard every day and chase the best version of Leopard lacrosse.”

The teams traded scores during an action packed first eight minutes, as the game was tied at three with six minutes to go in the opening quarter. Two goals by Dehnert, one from Dutton, and one from senior attacker Conor Walters broke the game open as the Leopards took a seven to three lead into the second quarter and never looked back.

A second quarter goal by sophomore midfielder Andrew Robbins provided the lone scoring of the second quarter for Lafayette, and the team carried an eight to four lead into halftime. After recording a hat trick in the season opener against Rutgers, Robbins continued his hot start with a pair of goals and an assist.

According to Dutton, much of the recent offensive success is due to a “a scout team” the Leopards have to help the attackers with strategy and consistent improvement.

“Without guys like [freshman midfielder] Sam Kirby, [senior defenseman] Josh Hubbard, and [junior goalie] Wes Moshier, our offense would not be able to continue to improve,” Dutton said. “These guys are truly the ‘unseens’ which make our team function.”

A back and forth affair in the third quarter included a pair of goals from Dehnert, Dutton’s third goal to complete the hat trick, and a score from freshman midfielder Ryan Kirkwood. The two assists in the quarter for the Leopards both came from Walters, who also scored a pair of goals in the contest. The team carried a 12-7 lead into the fourth quarter, before a goal by Robbins and Dehnert’s fifth put the game out of reach.

“Our first and third quarters were definitely our strongest as we played great team offense,” Dutton said. “We have come a long way from back in the fall but we have a ton of room for improvement. We are excited about what we can become.”

On the defensive end, junior Chris Adamo forced three turnovers and sophomore Pat Tully picked up seven ground balls and caused a pair of turnovers. Lafayette outshot NJIT 40-26, and did an excellent job limiting their own turnovers with just 13 compared to the Highlanders’ 27. The Leopards struggled again from the face-off dot, winning just six out of 26 opportunities. Freshman goalie Ryan Ness earned his first collegiate victory with three saves.

It was coach Myers’ first win of his Lafayette career, and he emphasized the importance of consistent work and dedication to ensure positive results during the rest of the season.

“It’s nice to see the men rewarded in the win column,” Myers said. “Winning always feels good but I believe the guys in the locker room recognize how much work we have in front of us and how much growth potential there is, starting with getting back at it on Monday morning.”

“For us it’s all about competing hard day in and day out,” he added.