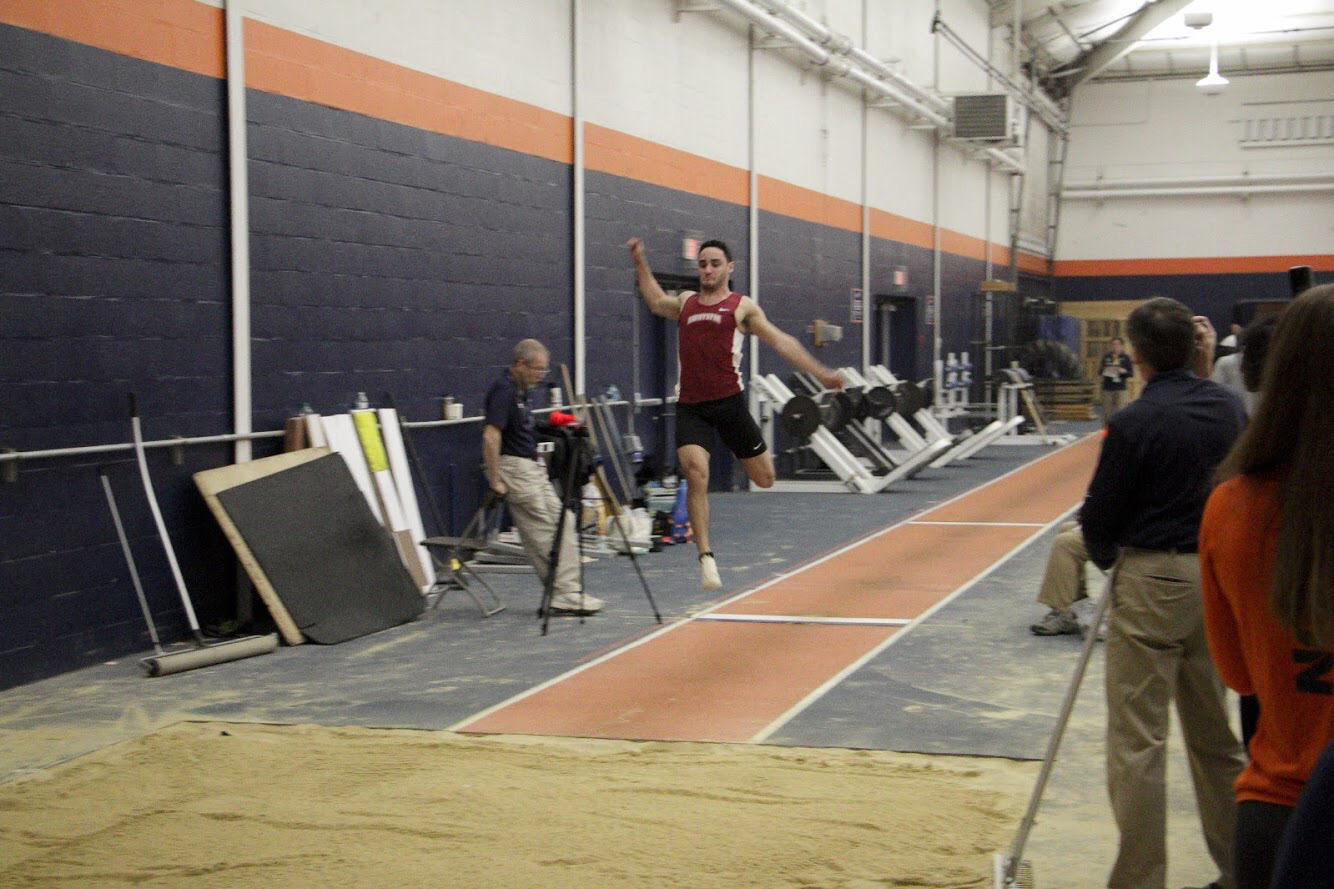 Sophomore Brian Kaufmann in full stride for the long jump. Kaufmann competes in both the long and triple jump events. (Photo Courtesy of Oscar Jopp ’22)

With Patriot League Championships looming, the Lafayette track and field team was back in action last weekend at two separate meets. Some team members made the trip to Staten Island, N.Y., to compete in the Villanova Invitational, while other players travelled to East Stroudsburg, Pa., for the DeSchriver Invitational.

Senior captain Caroline Harmon, competing at Villanova, shattered a 27-year-old school record in the mile run, finishing with a time of 4:57.67 to surpass Nathalie Marquis ’92 and her time of 5:00.6.

Several other Leopards also made their way into the record books at the Villanova Invitational. Senior Thomas Strand finished eighth in the 400-meter dash with a time of 49.86 seconds, the ninth fastest in the history of the school and less than 0.4 seconds off the top five times.

Joining Strand and Harmon in the record books is sophomore Olivia Barney with her 15.51 meter toss in the weight throw, good for 10th all time in the event. Freshman Autumn Sands finished fourth in the 3000-meter run with a time of 10:06.89, which is a personal best and is sixth all time in Lafayette school history.

Other strong performances at the Villanova Invitational included sophomore Sam Fishbein finishing second in the weight throw with a 17.12 meter toss and seventh in the shot put with a mark of 14.84 meters. Fellow sophomore Harrison Greenhill also had a strong showing in the shot put, finishing fourth overall with a 15.17 meter throw.

Freshman Jillian Warabak, coming off of back-to-back Patriot League Female Rookie of the Week honors, qualified for the 60-meter hurdle finals and earned eighth place with her time of 9.17 seconds.

We are really excited about [Warabak],” said Sands. “I think she’s going to help us out a lot next weekend [at the invitationals].”

It was an encouraging weekend for the women’s team in particular, as the group recorded numerous top-10 finishes and three personal bests including Harmon’s school record. After a winter break filled with training and long practices, the early returns are beginning to pay off and are a point of encouragement for the team.

“I think it’s really exciting,” said junior Margaret Schiazza. “Our team is clearly headed in a good direction, and just the fact that our team has grown in size increases the range of things we can do together.”

At the DeSchriver Invitational, sophomore Elizabeth Harmon, sister of Caroline Harmon, finishing first with a time of 3:05.67 in the 1000-meter run, paced the women’s team. Schiazza was right behind Elizabeth with her time of 3:05.70, good for second in the event, and sophomore Emily Becker finished third in 3:14.23. Freshmen Julia Eustace and Katherine Ellmaker placed second and third in the 800-meter run with times of 2:27.04 and 2:27.35, respectively. Senior Emily Moore earned fourth place in the 3000-meter run with a time of 10:54.12.

On the men’s side, junior Vinny Olivett earned fourth place in the pole vault with a 3.80 meter attempt. Freshman Jesse Schmeizer placed second in the 1000-meter run with his time of 2:38.23, and fellow freshman Ryan Murphy finished in sixth place. It was a youth movement for the men’s team, as freshman John Bell recorded a second place finish in the 3000-meter run with a time of 9:16.61.

“Overall, I think our team is just getting stronger because of the young talent and it’s really nice to see everyone contributing and scoring,” said Sands. “It also makes me excited about the next few years because we will have so many returning scorers.”

The Leopards will continue preparing for the upcoming Patriot League Championships which will be held in Annapolis, Md, from Feb. 16-17. The teams are emphasizing patience and speed in their workouts, according to Sands, and are focused on being at their best when it matters most.

“The coaches have obviously encouraged us to be competitive, but I think the athletes have had an even more important role in trusting the process,” Schiazza said. “I’m excited about this season because we, myself included, have had a later start to the season, so I think everyone is really on track to peak in two weeks.”

The team will be back in action this weekend with two more meets, as some team members will return to Staten Island for the Fast Track National Invite. Other members will compete in the Monmouth Winter Invitational in Monmouth, N.J.